A façade designed with Rhino reduces the pollution produced by 1,000 vehicles per day. 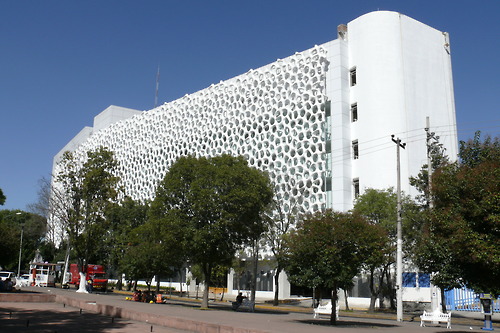 The most advanced projects in architecture are environmentally sustainable. In the construction phase, the most environmental respectful materials and processes are chosen. Authors create buildings that reduce energy consumption and fit with the surroundings.

VisualARQ and Rhino have an important role in the design of buildings and, when combined with the right materials, they become an important factor in the improvement of the environment. The following initiative from Mexico has succeeded in reducing air pollution.

The metropolitan area of Mexico City has more than 8 million inhabitants. Pollution levels used to be very high in the past, however, they have been successfully reduced over the last years. In 1992, there were only 9 days in which the air quality was excellent. Thanks to several measures, 2012 registered 248 days of good air quality. This is still not enough, though. In order to reduce carbon emissions, traffic is forbidden on specific days. However, since the public vehicle fleet is old, these measures are proving insufficient and environmental alarms often go off.

The original Manuel Gea González Hospital was designed by the architect Manuel Villagrán and was completed in 1942. After many years of service, in 2013 a new medical specialities tower was built, for whose construction environmental needs were taken into account.

Over 100 meters, the building has a double façade, a double skin of pieces made of a lightweight plastic material called Prosolve 370e, which is covered with a very thin layer of titanium dioxide (TiO2) powder. This white, shiny and opaque pigment has photocatalytic and anti-microbial properties. When it receives direct sunlight, it neutralizes the emissions and other toxins and retains them. No high UV radiation levels are needed to activate the coating electrons so that they break down nitrogen oxides and other compounds, transforming them into water and calcium nitrate (an element found in fertilizers) that will be washed off by the rain.

This system cleans the air that goes into the building and that surrounds it. An additional advantage is that the tiles screen filters sunlight and reduces the temperature inside, which also saves air conditioning energy and avoids polluting emissions.

The Manuel Gea González Hospital façade is estimated to be able to neutralize the nitrogen oxides emissions of 1,000 vehicles every day. 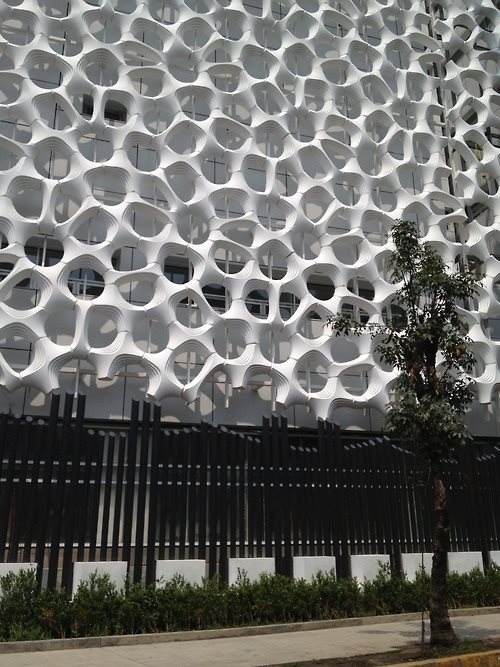 The design was made by a German team of designers from Elegant Embellishments and combines the polluting particles capture function with aesthetics. 90% of the façade (about 2,500 m2) is covered by a vertical metal structure that holds about 500 blocks assembled like a puzzle.

Each block is made up of five three-dimensional modules. The reliefs increase the absorption surface and reduce the speed of the wind, generating turbulences that better distribute the polluting particles over the surface of the cells. Since each piece of the puzzle has multiple reliefs, polluting particles can be captured from various directions.

Due to their lightness, the modules don’t require heavy machinery for their installation. The pieces are mounted on huge panels on the ground which are later mounted to a vertical grid on the façade. 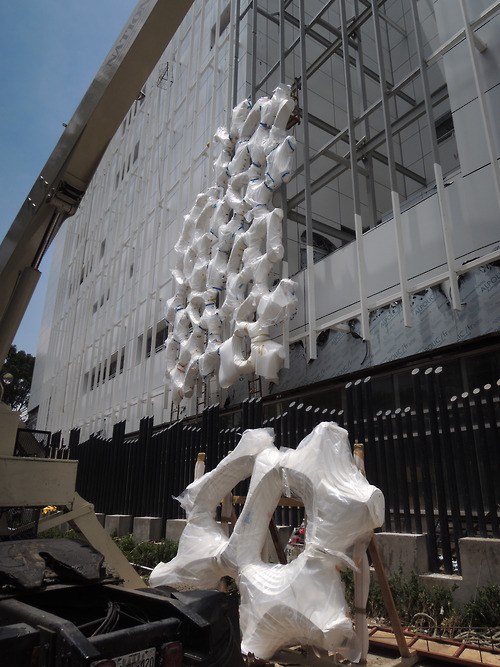 Even if the appearance is similar to that of a honeycomb, the cells actually follow a pattern inspired by sea corals and sponges. Each panel has a different and unique configuration. Rhino was the tool chosen to create such a complex and demanding design.

VisualARQ would be a handy tool to automatically generate the elevation and section drawings of this façade.

Prosolve 370e can be used in any type of building, next to a highway, inside a tunnel, indoors and so on. Its design allows both cladding fit systems and self supporting screens. 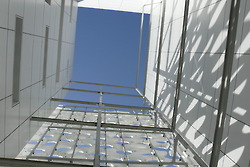 Maintenance is very simple. To keep the material white, it only needs to be sprayed regularly. The expected lifetime of the coating is 5-10 years. To restore it, it is not necessary to disassemble the tiles, since the product can be directly applied.

To learn more about the influence of architectural design on life quality improvement, with special regards to pollution in cities, watch Alison Dring (co-director of the company which created this project) TED talk (14′):

The façade of a Mexican hospital combines advanced technology with architectural design, two key concepts in which VisualARQ is based.