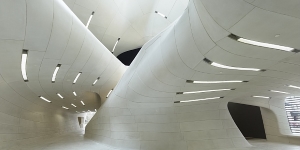 VisualARQ visits an architectural project designed with Rhino by Trahan Architects for the Louisiana Sports Hall of Fame and Northwest Louisiana History Museum.

Pleated metal panels, evoking the shutters of the plantation houses of Louisiana, cover the outer skin of the building. This austere appearance does not even suggest the interior architecture. We enter into a succession of dynamic and sculptural curves, forming a winding path through the interior of the facilities. The inspiration is the river, which bends and excavates the ground before emptying into the nearby CaneRiverLake.

The result of this architectural work was awarded with the prize of the American Institute of Architects (AIA) to the “Technology in Architectural Practice” BIM.

Culture and sport are more than different activities, they are often enemies to each other. This dichotomy has been used in favor of this architectural project. An equipment including two opposite collections of sports memorabilia and local history: Louisiana Sports Hall of Fame and Northwest Louisiana History Museum.

Those interested in sport go to see the items they are interested in and, alongside them, there is the local museum they would have not visited otherwise.  The same happens for those interested in history, they cross along the displays of the sports memories of the community that perhaps they wouldn’t have considered to contemplate but they are already there.

Moreover, how to awaken everyone’s interest? Easy to say, hard to do: creating a spectacular building that proves to be an irresistible temptation. Crossing along the building is seductive because it wraps around you, taking you, even if unintentionally, into areas of the Museum you did not expect.

The city of Natchitoches in Louisiana is an emblem of the Old South of United States, you probably know it if you saw the movie Steel Magnolias. It was one of the first inhabited towns in the state and it preserves in downtown the streets, shaded by magnolias and oaks, the houses with porches and the southern charm.

This is the setting in which Trahan Architects, founded by Victor F. “Trey” Trahan III, with studios in New Orleans and Baton Rouge, had to develop a building to house collections as opposing to each other as sports and historical. In addition, in a similar way they would produce several more clashes, the first is contemporary with classical architecture. 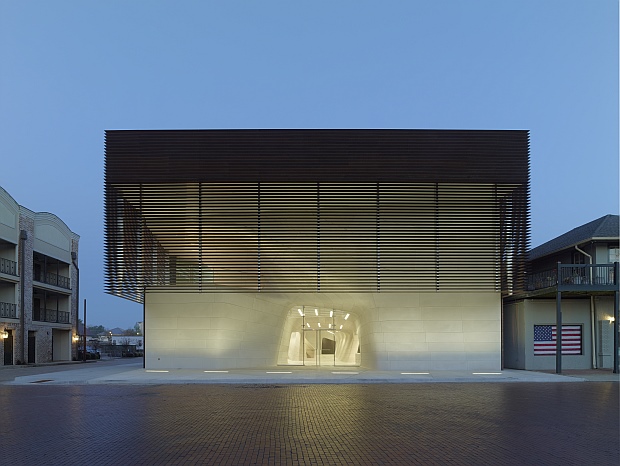 This issue has been resolved with the exterior design. The appearance is, of course, completely different from traditional houses but it has some points of reference to them. It maintains the height of almost two floors to fit into the environment. As we shall see more carefully afterwards, the structure was covered wit pleated metal panels that evoke the shutters of the plantation houses of Louisiana. 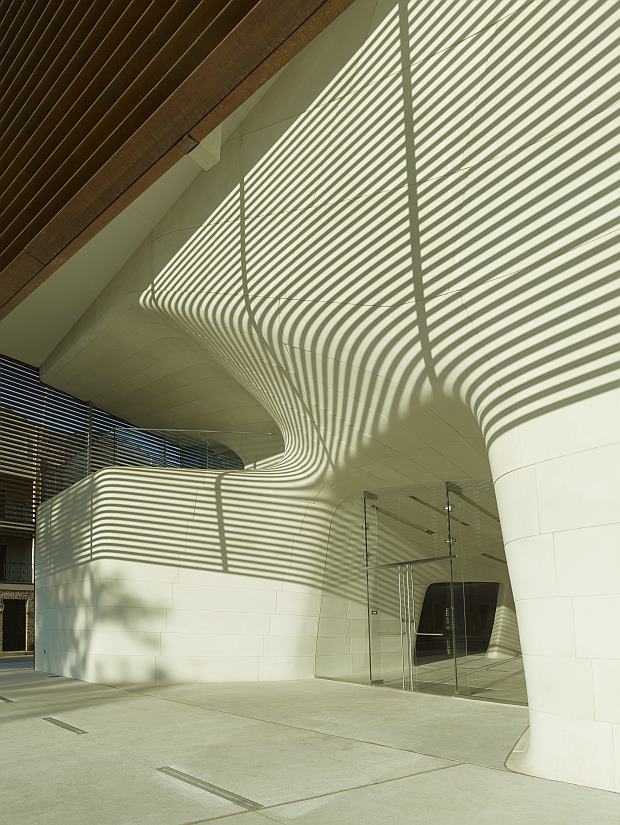 The building integrated into the urban fabric, against the nature that surrounds it presents another confrontation. Inside, the choice made is an architectural design of dynamic and sculptural curves, forming a winding path through the interior of the facilities. The inspiration is the river, which bends and excavates the ground before emptying into the nearby Cane River Lake.

In terms of the content of the collections, the sport is considered an additional historical fact. In this way, the forced neighbourhood of the exhibits could create a new relationship between them and would be of interest to all visitors.

These were the approaches of Trahan Architects, now it’s time to see how they developed them. 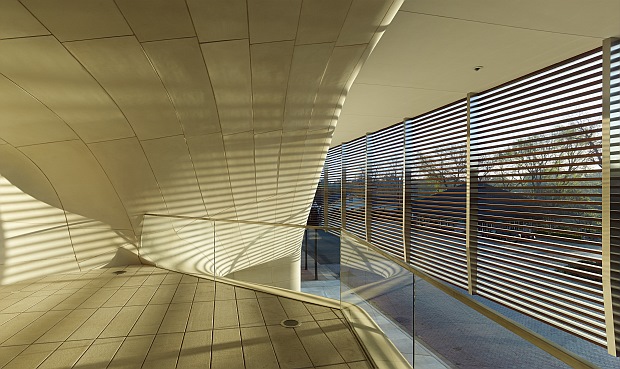 From the clapboards of Southern plantations to contemporary architecture

On the façade, the old wooden window shutters are replicated with the pleats of metal. In the same way wood traditional houses have been worn over the years, the passage of time will also leave mark on the copper panels. This architectural design does not mimic the tradition, it evolves from it while retaining a family resemblance, like a young man about his great-grandfather, a vague likeness in completely different faces. The choice of copper also relates to the industry in the area.

In addition to the identification with the environment and aesthetics, the copper panels give movement to the facade and allow ventilation and the passage of light, as old louvers did.

Wrapping and flowing surfaces lead your way inside the building

Behind the austere façade, we are left speechless when we pass the entrance and arrive to the atrium, which is the center of the design.

Once inside, the visitor will be overwhelmed when walking around hallways and rooms and will be transported to a cave or to river meanders. 1,150 white stone panels have been placed, all of them different, with thicknesses which reach 13 cm in some cases. Finishing textures, according to Troy Trahan, refer to the bousillage, the mixture of hair horse, sand and plant called Spanish Moss (Tillandsia usneoides) that was used in Louisiana from the s. XVII. 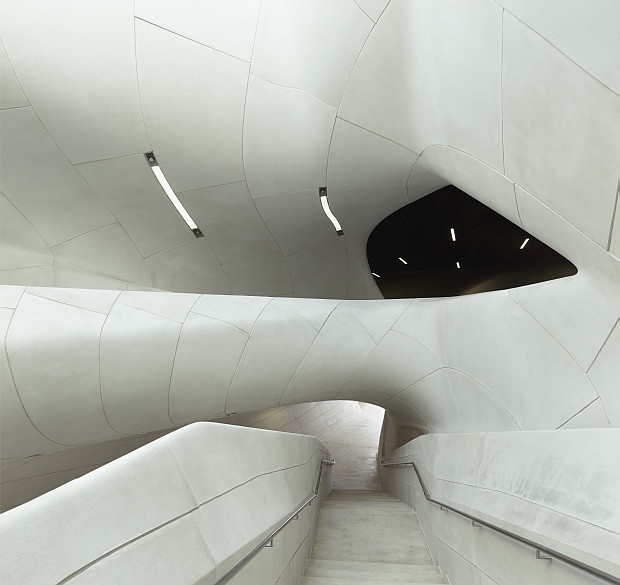 The fluidity of the design, based on NURBS curves,  achieved with more than a thousand stone panels, hides a complex process for their design and placement. Each of the pieces of this 3 dimensions puzzle has been digitally created. The 1.150 pieces, different from one another, measure between 120 m2 and 225 m2. They are placed on a metal frame to which are fastened with dozens of models of anchoring application engines. 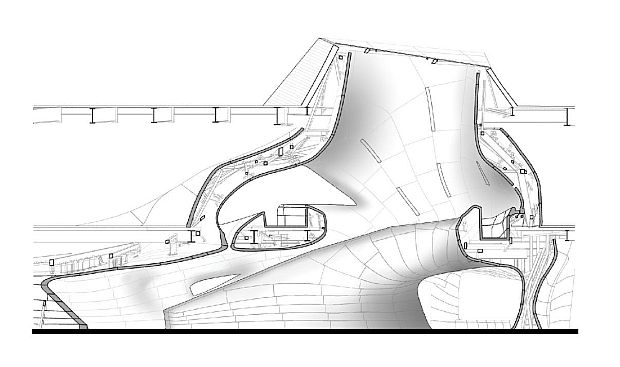 Rendered section of the architectural project by Trahan Architects

The design was performed using several software: Catia, Maya, Rhino, Grasshopper. From the modeling of panels made with Rhino, Grasshopper was used to define the geometry of the metal brackets and the various supports for fastening the stones and determine their positions. The result was that the 1,150 panels fit perfectly and have been controlled the potential deviations by strains of forces or weight (the largest piece weighing almost 3 tons and all of them weigh 700 tonnes). 30 types of anchors were used, each of them with multiple points of connection (up to 15) and, in addition, each anchor could be screwed, hang, snap… 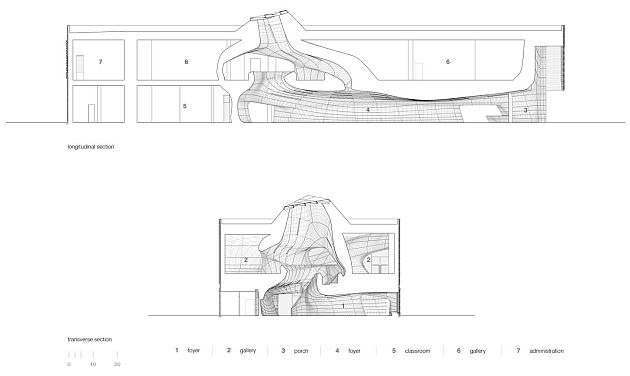 This is the setting for the collection sports memorabilia, started more than 50 years ago. In addition to a collection of photographs, there are interactive panels that track the history of sports in the state of Louisiana, soccer, basketball, baseball, horse racing, golf… 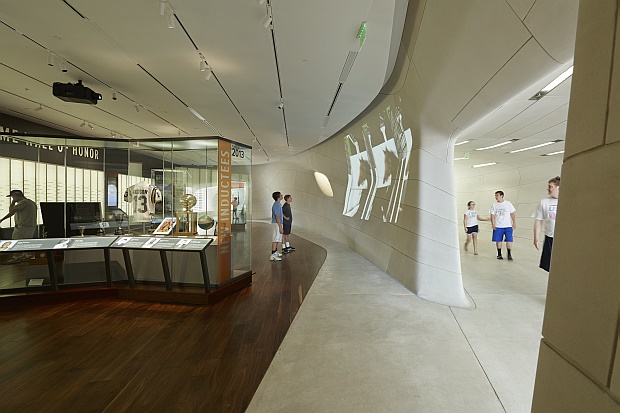 The history museum exhibits show the evolution of the population, from the native tribe of the Caddo and the Spanish and French explorers to the present. It includes artifacts objects, artistic pieces, references to well known figures or traditions.

The choice of “Trey” Trahan for this project was surely reinforced by the fact that he knew well the environment (born in Louisiana) and he had experience in the design of sports facilities in that state. The result of this architectural work was awarded with the prize of the American Institute of Architects (AIA) to the “Technology in Architectural Practice” BIM.

An austere appearance hides the secrets and the labyrinthine meanderings of the rivers of Louisiana. Architecture does not imitate the mysteries of reality, but it reinvents them. 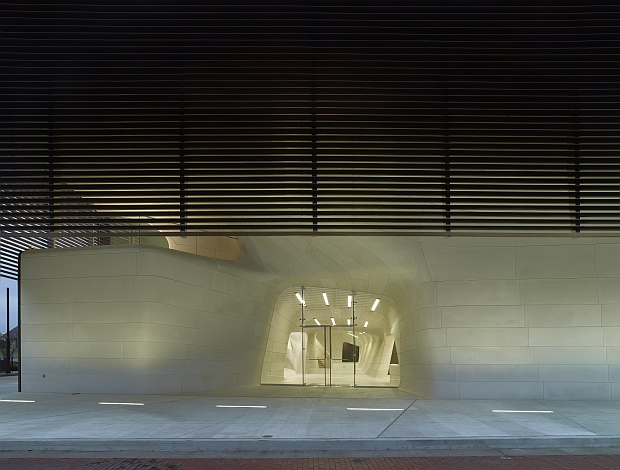