This project features the work of Gabriela Pinho, a student in Architecture and Urbanism from the Federal University of Santa Catarina, who has been awarded the third prize of the VisualARQ BIM Design Student contest 2021.

“The project was developed during the subjects Project V and VI of the undergraduate course in Architecture and Urbanism. The objective was to design a building for collective use, meeting the demands of the region with apartments for residential use and cultural spaces for a central area of the city of Florianópolis, Santa Catarina – Brazil. The land was on the corner between Deputado Leoberto Leal and Presidente Nereu Ramos streets and Avenue Osmar Cunha, in a region surrounded by shops, restaurants, bars, and cafes and close to the city’s founding center. The project started with the twisting of the main axis of the tower. The tower is formed by 10 floors with single-family and multi-family apartments, in which the internal walls and the walls that divide each apartment are modified on each floor, as the building rotates around the torsion axis, forming different configurations of floor plans architectural. In addition, four floors for collective use and parking complement the project.”

“The building’s structure is made of reinforced concrete and consists of 5 pillars with dimensions of 0.80 m, a rigid axis formed by the stairs (located in the center of the tower) and the ribbed slabs. This type of slab was chosen as it allows for wider spans and reduces the structure’s own weight. In the collective use floors, the concrete column and beam structure was chosen. The ground floors – marked by the two main entrances to the building – concentrate activities for collective use. In these spaces, cultural activities can be developed in open spaces or in the various rooms available in the building. In addition, there is a space for a museum and also for outdoor exhibitions in the intermediate squares.”

How has VisualARQ contributed to this project?

“VisualArq contributed to the creation of the project from the conception of the idea. From the initial model generated with a physical model, the project had its continuous development in the tool, which allowed us to arrive at the best formal result.

For the definition of the building’s direction of rotation, taking into account the implantation of the land in a consolidated and densely occupied central region, some tests were carried out in Grasshopper. For this purpose, the parameterization of the slabs was chosen, allowing the choice of the position that would allow sunshine and more adequate ventilation. Another important point of the tool’s contribution was to generate the ribbed slabs respecting the rotation position of each floor. The parameterization of the slabs, in a new process, optimally generated the transverse and longitudinal beams that make up the ribs of the slabs. For that, VisualARQ components were used in Grasshopper. Thus, the tool made it possible to fully explore the initial idea of the project, contributing to the development of the different shapes of the tower and the rest of the building.

Another important point is the dynamic documentation that made it possible to generate the technical plans quickly and accurately, allowing the drawings to be updated whenever necessary. BIM modeling also allowed the identification of design problems throughout development and greater precision in the final result.” 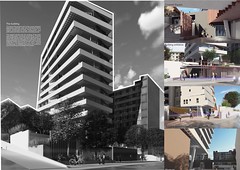 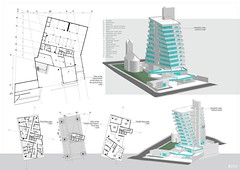 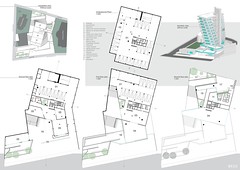