VisualARQ and BIM have a long way to go because the Building Information Modelling still hasn’t been fully implemented. The advantages of this relationship are many and have various implications, as we will see. For the time being, UK, Canada, USA, New Zealand and South Korea take the lead. The recent initiative of the European Parliament requesting the use of BIM in public tenders will have great relevance in extending it widely. The disparity in knowledge of Building Information Modeling implies that it still not possible to have a study covering all the countries. However, there are already some reports which collect large samples that allow us to see how the most advanced countries are defining the benefits they get from the use of BIM. For instance, at the end of the 2013, McGraw Hill conducted a study that has just been published, with the data collected in 10 countries: Australia, Brazil, Canada, France, Germany, Japan, Korea, New Zealand, United Kingdom and United States. The largest number of participating companies belonged to USA. We will present some of the findings taking into account the overall results since, on a country basis, the specific weight that each of the countries represent may vary considerably. In future publications, we will analyze the different perspectives of a general contractor and a trade contractor since, despite using the same system, they assign different values to each feature. In quantitative terms, the results cannot be extrapolated to the non-surveyed countries since, for example, in Spain the use of BIM is much lower. We will then analyze the qualitative aspect, the specific advantages implied for the users of this system.

What are the most globally valued advantages?

Interestingly, the first three places are occupied by advantages regarding different process phases: internal, design and construction. This puts in evidence the transversality of BIM: it affects each and every phase of a project. Almost half of respondents (41%) reported that the main virtue of BIM was to reduce errors and omissions in the design phase . This simple factor already implies a further reduction of time, materials and costs, so it becomes the engine that pulls other advantages. With a 35 % response rate, the second advantage is to improve collaboration with owner/design firms during the construction phase. We at VisualARQ consider that there is much to discuss on this point. After historically using paper plans, Computer Aided Design arrived. The fact of having better documentation was supposed to benefit the design and the relationship between all participants. However, despite all its virtues, CAD failed in this specific issue. BIM covers this gap as it allows to share information. The fact that several people are working on the same project does not make it a collaborative project. Collaboration stems from culture and is the change that must occur so that BIM really revolutionizes the way we work. The centre should not be each project, but the way in which all the involved parts are working on it. In the third place, 32 % of respondents opted for considering that BIM enhances organizational image. This aspect has been considered “internal” because it defines the organization personality. This image improvement should clearly result in more and better professional assignments and therefore in economic benefits. At short distance from the previous point, 31% of respondents emphasized that rework was reduced. This description is quite similar to the first point (to reduce errors and omissions). This highlights that much of the work does not reside in creation, design and development, but in the multiple changes and corrections to be made, going back and starting over. In the fifth place, we find “to reduce construction cost” (23%), and in the sixth is “better cost control and predictability” (21%). Surprisingly, directly economic factors come after the above mentioned ones. Saving is implicitly implied in the first advantages listed, but through cost control rather than direct cost reduction (this only appears in the 10th place out of 15). Any alteration in the original approach to the project, either because it is expanded, reduced or corrected, results in a cost variation which must be taken into account and may influence on the decision about whether the project should be carried out or not. The seventh point in favor of BIM is that it allows to reduce the overall project duration (19%). The reduction of errors, omissions, modifications and repetitions has been highly valued. All these changes extend the process and, in extreme cases, they can lead to the renegotiation of conditions or renewal of licenses. The use of BIM is also considered a favorable element to gain a better position of marketing new business (19%). It is also an internal benefit of the organization, directly related to the improvement of the corporate image. “We are better, we look better and so we are considered” is what companies seem to think. Almost holding the same place, we find three internal advantages: offering new services (14 %), increased profits (14 %) and maintain repeat business (13%). It is interesting that companies are not only interested in getting new projects and new customers, but also in keeping the ones they already have. Having a portfolio of loyal customers can be considered a company asset, especially when the competition for projects is very keen and it is advisable to avoid purely economic struggle. In the 12th and 13th place, the benefits that affect the process development regain importance: reduced cycle time of workflows (10%) and faster client approval cycles (9%). Both aspects have a complementary variant. On the one hand, sharing customer information as allowed by BIM may speed up the decision-making processes and, on the other hand, the promptitude of response to customer demands will also reduce the time used to make a decision. Improved safety (7%) is ranked 14 in the advantages list. We at VisualARQ interpret that surveillance in security is so high that adopting a Building Information Modeling system does not substantially increase it, since it is already controlled by other means. Finally, the last place is occupied by faster regulatory approval cycles (6%). Thanks to the reduction of time in the design and construction, there is less risk that permissions will expire. 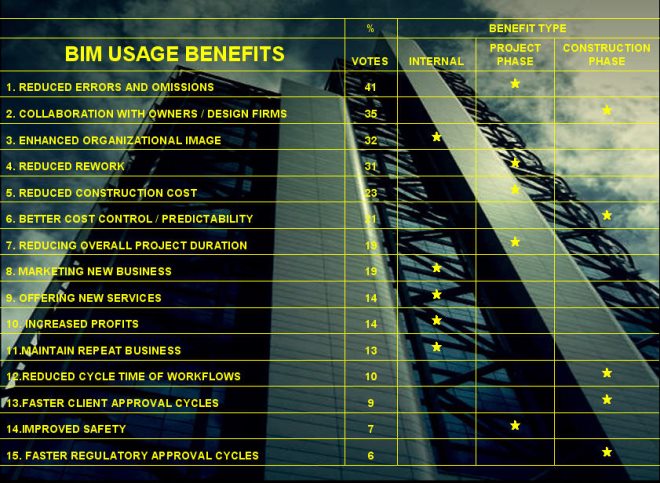 These were the 15 BIM advantages voted by people and companies involved in architecture, construction and engineering. They are the result of experience and you can add your own ones. With VisualARQ, you can easily integrate your work into a BIM system, exporting it to the IFC format. Freeform architectural design fits perfectly within Building Information Modeling. If you haven’t done it yet, download a demo. If you have already tried VisualARQ, join our community on Facebook, Twitter, Youtube, Linkedin or our several networks to find like-minded people, passionate about the worlds of architectural, parametric and 3D design. Sources: McGraw Hill Construction (2014) and Arch-Vision. (Images under licence Creative Commons unless otherwise stated.) (Article by M.A. Núñez)