A Rhino project takes the stage

Shopping malls are often referred to as the temples of our time. The place we all attend to with almost religious regularity and faith in the virtues of consumption, regardless of our social class or ideology. While contemporary architecture creates churches which awake a feeling of security and retreat, shopping malls enhance their appeal with spectacular dazzle. The broad arches of malls have succeeded the high ogee arches of Gothic cathedrals. The wealth of the ancient sculptures and altarpieces is now reflected in clothes and objects displayed in store windows, the new altars. The architectural design of the outside should attract visitors like a magnet, creating expectation for a unique experience. Walking around should generate a satisfying feeling: architecture is key to encouraging to stroll and remain inside the building. The magnificence and luxury can be enjoyed by everyone, regardless of who may make a purchase or not. 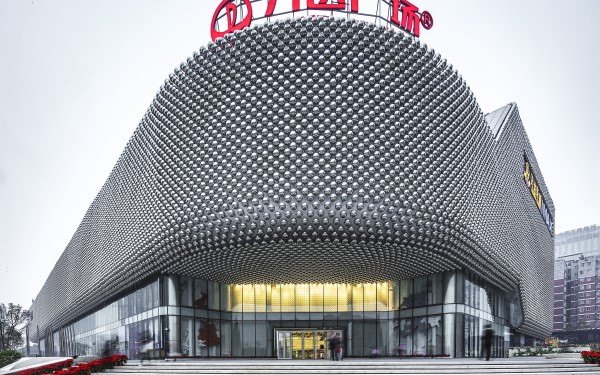 UNStudio (United Network Studio) architects have gone a step further, considering a shopping space as a theatrical stage. The place where everyone sees and is seen and where you can enjoy a variety of experiences. A fantasy space in which we can adopt another personality, breaking away from everyday reality. In 2011, they won an international competition to create a luxury shopping mall in one of the most important areas of the city of Wuhan, in China. The result was Hanjie Wanda Square, which gathers boutiques and international brand shops, cinemas and food services. Rhino software was used for its design.

One of the mall skylights. Image: Edmon Leong (via UNStudio)

In these high level establishments, the idea of luxury has been transmitted through simple handmade materials treated in a sophisticated way. The façade is a very prominent element but should not distract our attention from the careful design of the inside. In both cases, the use of light is essential. The façade is like a ribbon wrapped around a gift, custom set and created for the occasion, so striking that it is impossible not to look at the package it is tied around. It was made with metal panels that were covered with more than 42,000 handmade spheres, approximately 600 mm in diameter. Different tests for the panel inclinations were carried out to get the ideal result. 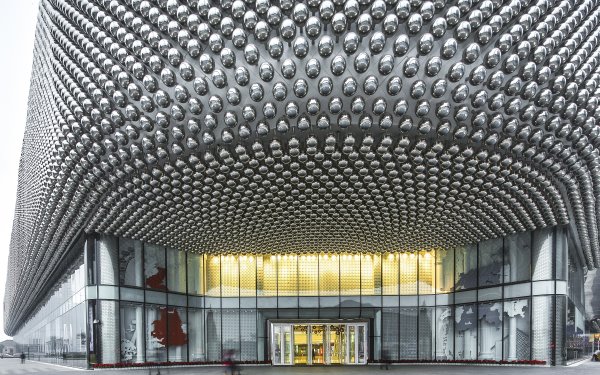 These spheres are actually polished stainless steel hemispheres. Initially, they were supposed to have a base made of alabaster, but the base was finally replaced by laminated glass. These nine different models of carefully and homogenously polished hemispheres create a visual effect of movement, like the movement of water or of a lightweight fabric. Each sphere hides LED lights. There are more than three million of them throughout the 17.894 m2 façade. The lights which are projected outward create many light spots, while the ones oriented in the opposite direction –remember that the base is made of glass – generate a diffuse lighting at the rear. The outside lights can be programmed to achieve different color and shape effects. The façade can also be used for video projections, specially at night. 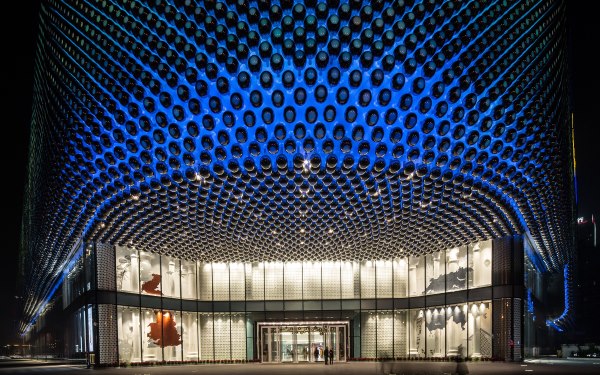 LED lighting allows to create animations and variations on the façade. Image: Edmon Leong (via UNStudio) 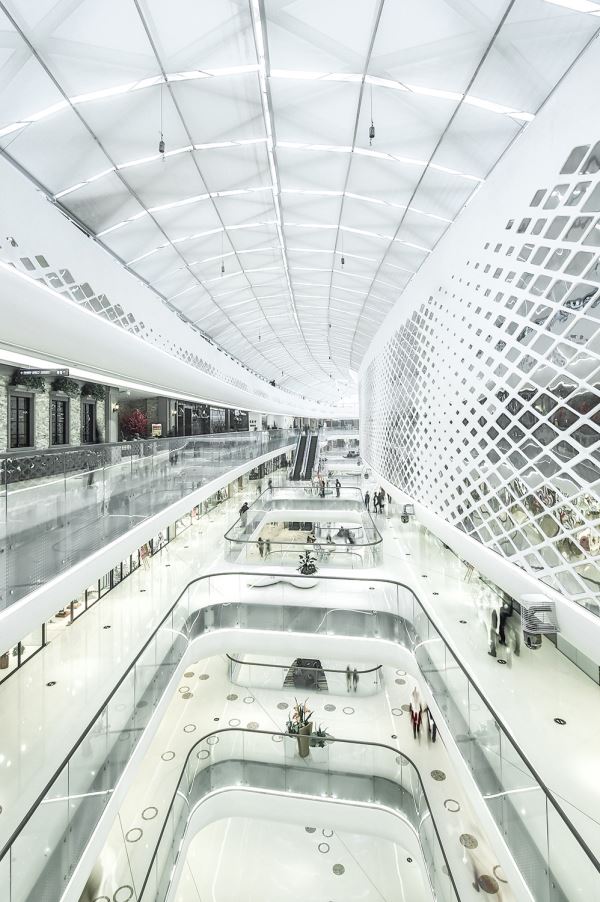 The main entrance is located on the north side and leads to a hall decorated with warm hues of gold and bronze. These rich color hues aim to evoke traditional Chinese culture. Geographically opposite, there is a different yet complementary space. In this space, silver and steel colors predominate, attempting to establish a link with the turmoil of the modern city. 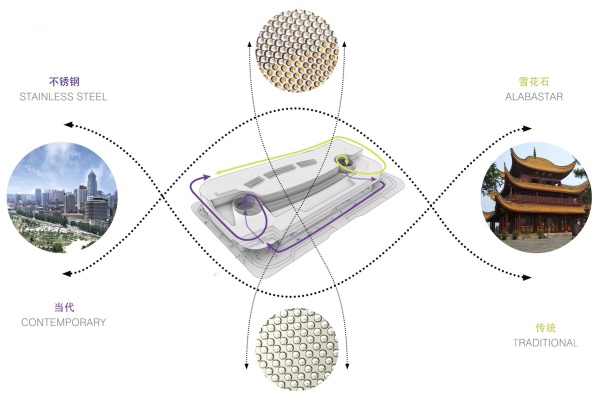 Materials were chosen considering both tradition and contemporaneity. Image: Edmon Leong (via UNStudio)

Both areas are topped with skylights consisting of 2,600 glass panels with a dense digitally printed design. These skylights have a spectacular funnel shape and develop from the roof to the ground floor, as if they were large chandeliers. Inside each skylight there are two elevators that offer panoramic views of the bustling center activity. 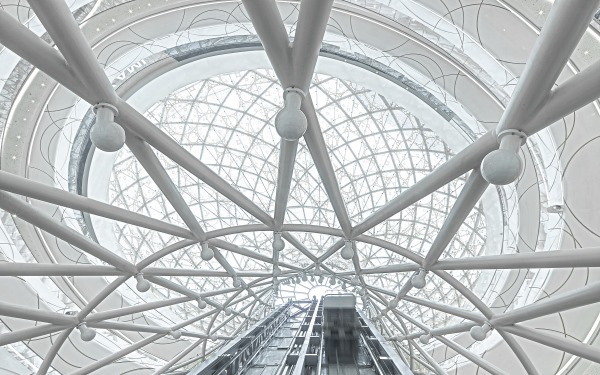 Elevators inside the skylights. Image: Edmon Leong (via UNStudio)

Atria are central distribution points and here the light is intense. As we move through the walkways around the shops, central lighting diminishes, leaving room to the lights of each shop. This lets sellers achieve the effects they want to create in their own store windows. This way, artificial lighting – whose design starts on the façade – combines with the natural light coming through the skylights, varying as hours pass by. 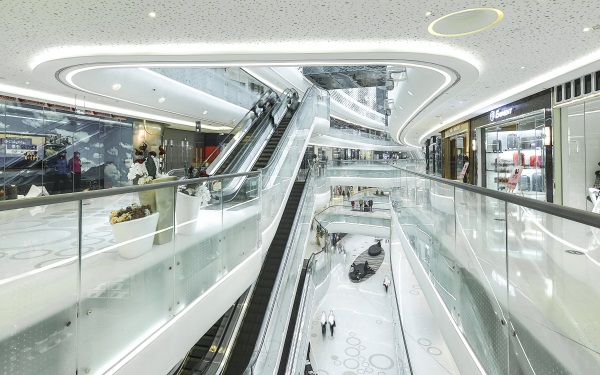 Glass balustrades and polished floors, along with the monochrome finish, set up a sober and elegant interior space to highlight the sumptuousness of the forms. The UNStudio was founded in The Netherlands by Ben van Berkel and Caroline Bos. It has offices in Shanghai and Hong Kong, since many projects are being developed in China. In the Hanjie Wanda Square, the spectacular architectural designs of the façade and the interior space are consistent with this type of establishment. Here, the most important elements of luxury are space, the flawless finishing of the building and its refined lines. These factors, together with the originality of the building, convey an idea of exclusivity and make visitors enjoy an experience that places them in the center of the fantasy scenario designed for them to be the protagonists. 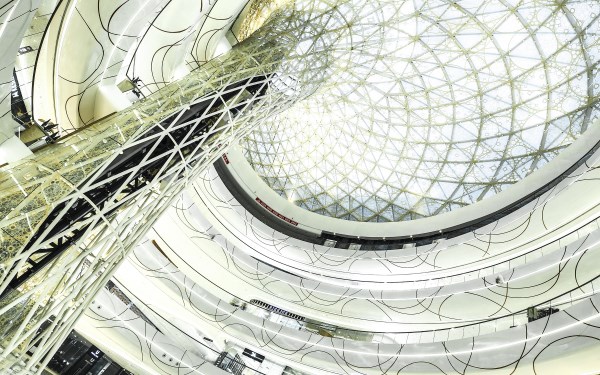 Architecture creates a fantasy scenario where visitors are the protagonists