An architectural fish with a touch of Rhino

At VisualARQ we believed we had enough with a single animal (Rhino) but, on the shores of South Korea, we discovered the wonders of the oceans and added a fish to our collection. We don’t know if it’s a whale, a dolphin or a species yet to be discovered. What we know for sure is that it is an architectural fish. The evidence? It’s a Rhino design and it has gills. Check it out yourself. Animations are rendered by soma/isochrom We are talking about the work by the Austrian soma architecture firm. Although this beautiful country has no sea, the team members Stefan Rutzinger, Kristina Schinegger, Martin Oberascher and Günther Weber managed to capture the essence of a sea creature with their Yeosu Pavilion. The motto of the Universal Exposition held in the Korean city of Yeosu was: “The Living Ocean and Coast: Diversity of Resources and Sustainable Activities“. The interpretation suggested by soma architecture made ​​them winners of the first prize in the international competition and granted them the go-ahead to create the Theme Pavilion. It was not intended to be a temporary construction, it should become a permanent educational facility at the service of the city. It is an important thing to mention, since temporality allows experiments that continuity excludes. 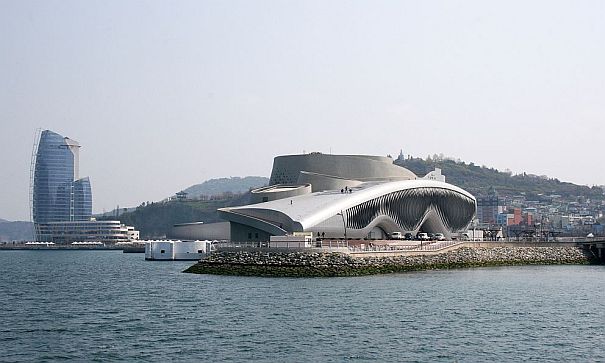 A pavilion originally created for an expo becomes a permanent equipment. Image: soma

The purpose of this type of pavilions is hosting exhibitions halls, meeting rooms, and sometimes a space for rest or leisure. As an architect, you can choose to make the contents of these facilities define the use of the building and to concentrate on providing functionality. soma architecture chose to go against the tide. They made the design of the building itself talk about the expo theme, i.e. oceans and living costs, and their relationship to sustainability. The authors started from the idea of the sea as an element with a huge surface and a big depth. This duality resulted in a design in which the surfaces mutate from horizontal to vertical, thus redefining the interior spaces. This project does not have just one key structural element, but two: the cones and the façade. 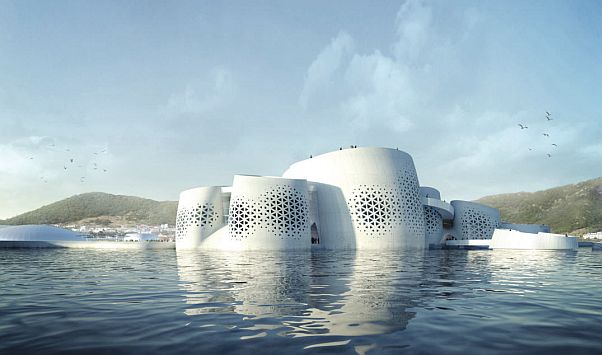 soma architecture based the design on cones. Image: soma

Let’s start with the cones. They are responsible for the vertical surfaces we have mentioned, they appear three times, in different sizes, and these geometric figures host the exhibition spaces. Between them we find horizontal surfaces, intended for the foyer and a multipurpose area. The alternation of the orientation of surfaces incorporates depth. The spaces between the cones are oriented in such a way that they match the most common wind conditions in the area. 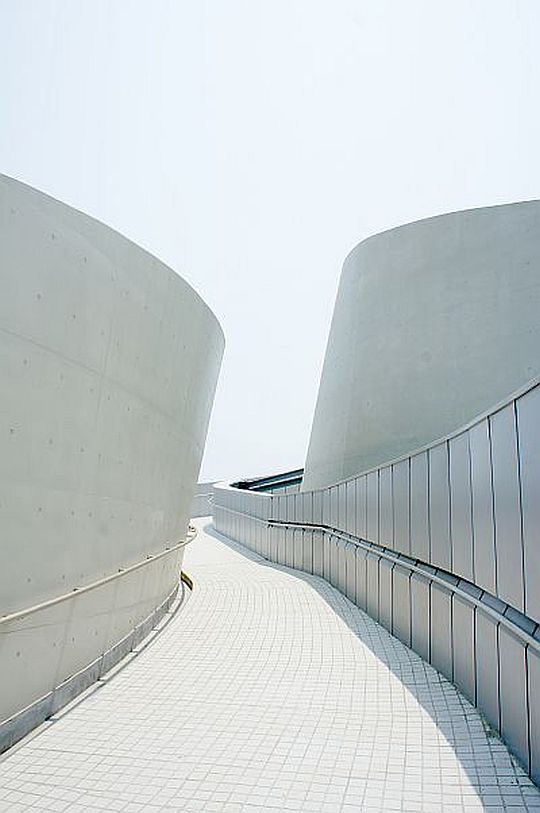 The orientation of the cones takes advantage of the wind circulation to improve ventilation. Image: soma

This feeling of depth is reinforced as the visitors enter the Pavilion. First, they find two areas formed by cones with a height of 6 m. As they move forward, they find another space, huge by contrast, with a height of 20 m and an area of ​​1.000 m2. Remember that the sea, with its extent and depth, was the starting point of this design. 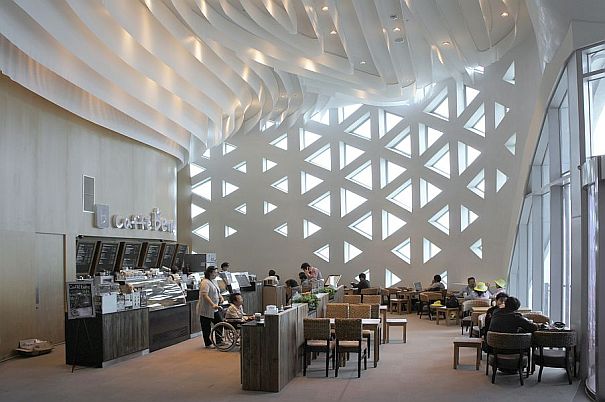 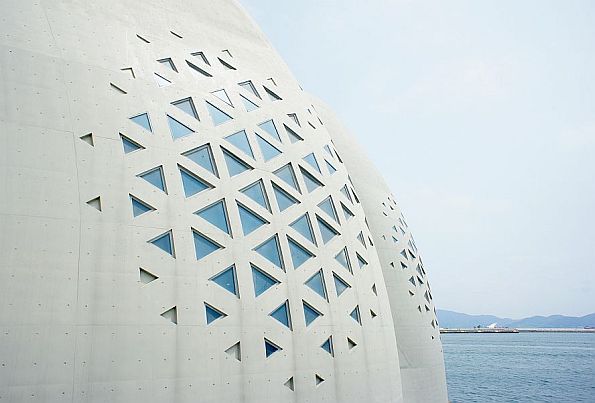 Design of the lattice in the project commented by VisualARQ. Image: soma

The second floor is occupied by a large hall. At the end of the visit, it’s time to relax. In a café, watching the ocean, or taking an elevator to reach the roof, which is full of life. The life of the vegetation that grows on it and that of the people who walk through it, enjoying a panoramic 360º view. After the ascent from the inside, it’s time for departure, descending from the outside by a ramp that leads to the plaza. 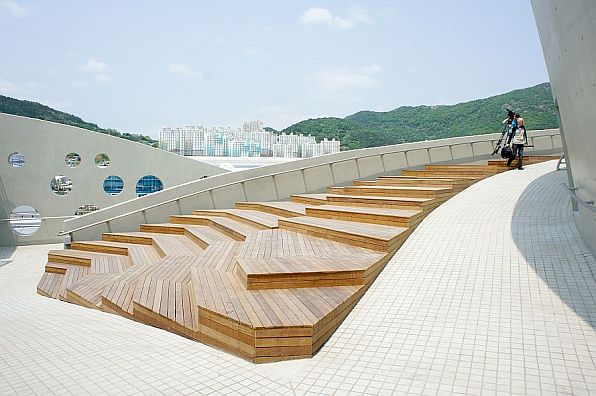 A ramp descends from the garden areas of the roof. Image: soma

The alternation of surfaces appears again in the outside appearance. The building has three sides, the one facing the sea front has soft and wavy profiles such as the coast. The opposite side is attached to the ground by a path that descends from the roof garden. The entrance opens onto OceanPlaza and casts a shadow on it. The sea, the country and the city. 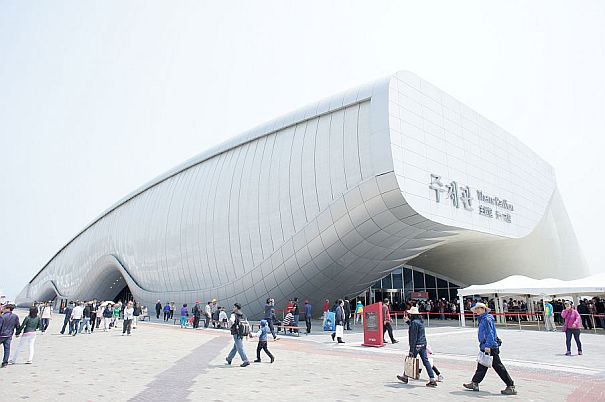 The façade casts a shadow on the plaza. Image: soma

The other defining element is the building façade. A lively façade. Where we have seen gills, there will be those who only see lamellas of glass fiber reinforced polymers (GFRP). In any case, through them this body comes alive when they let sunlight into the interior. 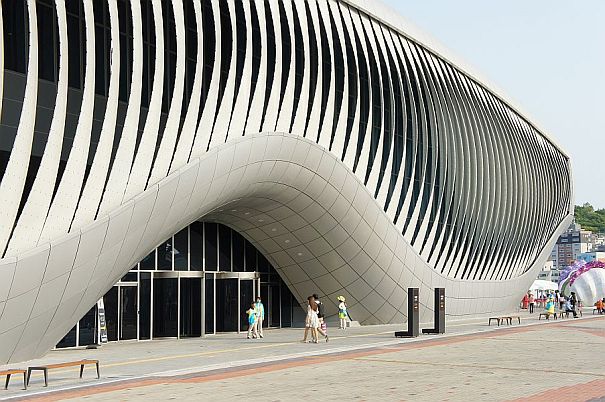 The undulating façade design implies that its height varies: the maximum height is 13 m and the minimum height is only 3 m. The 108 lamellas can oscillate because they are only fixed to the top and bottom edges. They just need solar-powered computerized servomotor actuators to move them. These fake waves on a façade of 140 m create an undeniable oceanic effect. Animations are rendered by soma/isochrom The flexibility of the material of the lamellas, their different length – hence their different opening space- and the fact that each one of them is individually managed, makes the façade cladding be alive, like the sea. This parallelism derives from the architectural implementation of research in biological moving mechanisms by ITKE University Stuttgart. For the implementation of these innovative concepts in the façade, soma architecture worked with Knippers Helbig Advanced Engineering. That’s why in VisualARQ we love this work and have added it to our favourite façades. When there are no more sun rays that pass through the lamellas, it’s time to activate the LED lights that they incorporate. However, the sun is still the protagonist because the energy that it has provided during the day is concentrated and distributed by solar panels on the roof. An unavoidable choice for a pavilion that was born to promote sustainability. Animations are rendered by soma/isochrom The use of Rhino software allowed the creation of this complex design. Replicating the ripples of the waves, such a misleading simple movement, and creating a project with this variety of surfaces requires a clear idea of ​​the effect to be achieved and a sophisticated tool to develop it, whether we are talking about simple curves, NURBS or parametric design. 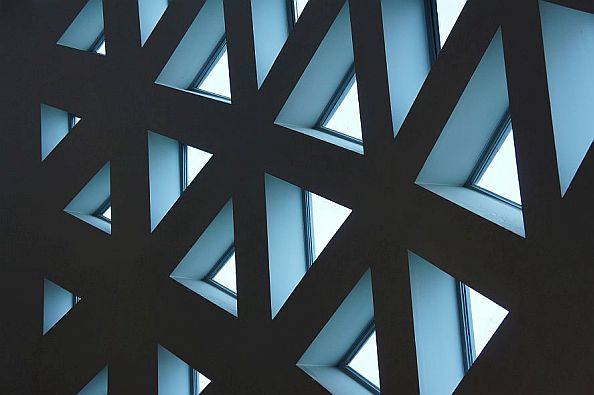 Rhino software is ideal for parametric designs and all kinds of curves. Image: soma

What’s most important in this project is that it was built to represent the concept of “The Living Ocean and Coast: Diversity of Resources and Sustainable Activities“ as part of an international exhibition, but it is not a perishable work. We are not talking about the physical permanence of the facilities, but about the validity of the design. The pavilion intended to provide a response to the immediate needs of that time and to the future ones, i.e. today’s ones. The motto that inspired the building has become its identity: a lively, diverse and sustainable architecture. 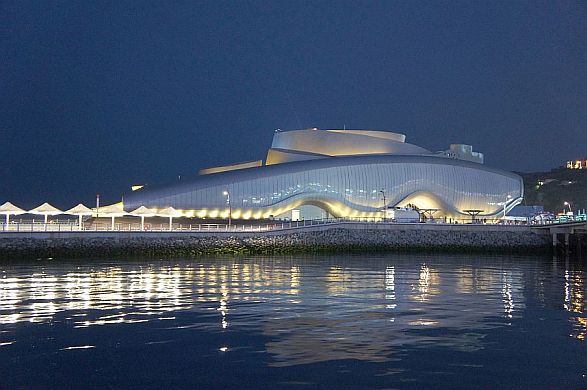