An architectural space in Rhino to develop creativity

A brief test for architects and designers: 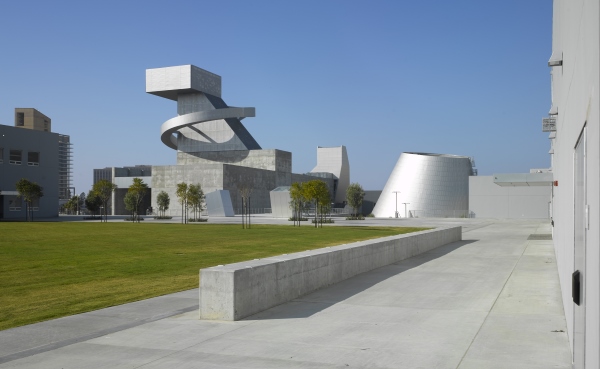 View of the architectonic planning of the campus. Image: © Roland Halbe

If you answered negatively to these questions, either you don’t do architecture or you are going through a rebellious stage. In case you got stuck at the first question recalling the building design of your college, we understand your frustration. If you answered “Yes” to these three questions, you have come to the right place: the Ramon C. Cortines School of Visual and Performing Arts. 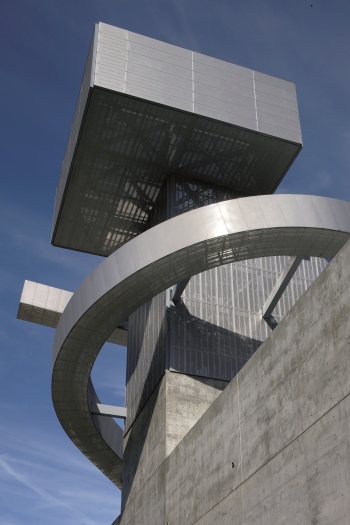 Detail of the Tower, a Rhino design. Image © Duccio Malagamba.

Thinking of a sculpture? It is no coincidence: the reflections in brushed stainless steel enhance a design that reminds of a constructivist sculpture. The architectural design will be the responsible that the school’s goal is clear to any student who steps in the building: to encourage their creativity and to orient their skills in an original and unique way. No worries, what happens once the young folks get into the school won’t be the architects’ responsibility anymore. Those who travel on the busy 101 Freeway cannot avoid turning their gaze to this construction, for whose design the Austrian studio COOP HIMMELB(L)AU used Rhino architectural software. The inhabitants of the city will see this building as a link in the chain of unique design cultural facilities that unfolds along Grand Avenue: the Music Center (which includes the Dorothy Chandler Pavillion by Welton Becket), the Colburn Conservatory by Hardy Holzman Pfeiffer, the Museum of Contemporary Art by Arata Isozaki, the Cathedral of Our Lady of the Angels by Rafael Moneo and the Walt Disney Concert Hall by Frank Gehry, with which it shares some features. 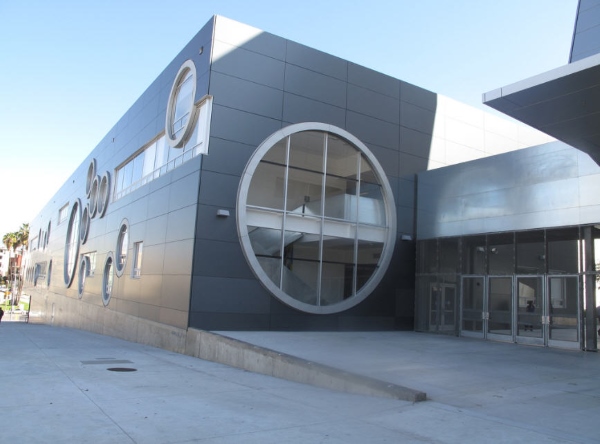 We are not including this school on this list by mistake. Although it is a school, it was decided that the use of its theater, with nearly 1,000 locations and excellent facilities, would not just be restricted to student performances, but would also be of public access. This shared use has resulted in an approach to the space which includes private, semi-public and public areas. Among the private areas, there obviously are the classrooms. The public area is the theater, whereas the semi-public areas are the library, the cafeteria, the campus central plaza and the network of corridors in the classrooms buildings, since these can be used as exhibition halls. 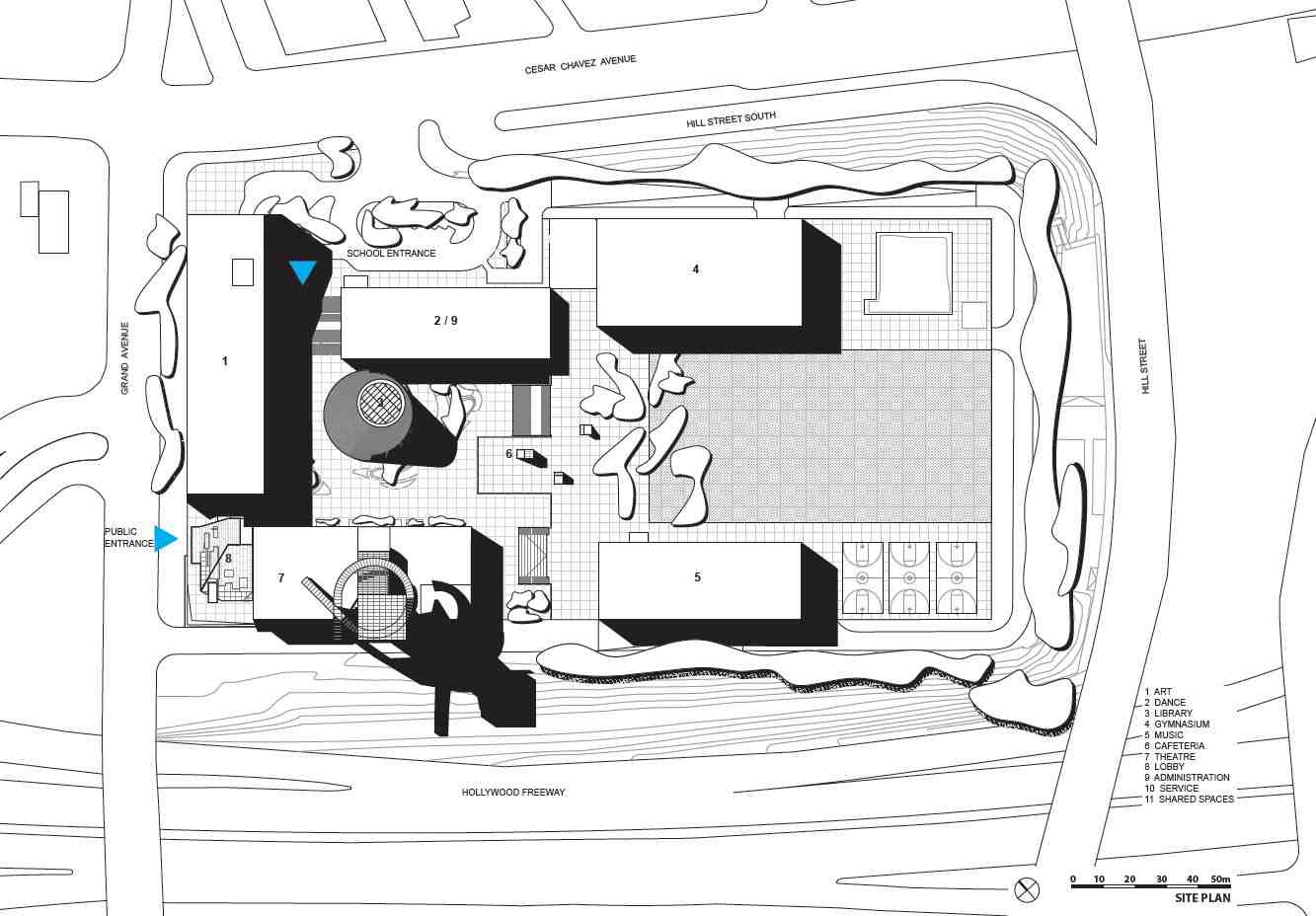 The campus occupies an area of 39.578 m2 and, within an orthogonal surface, there are seven buildings for the above mentioned uses. The designers chose unique and easily recognizable architectural elements as hallmarks and points of reference within the area. The perimeter is set by four blocks of classrooms, one per academy: visual arts, music, dance and theater. They mark the border between the city and the student world. The campus is accessible from several entrances that converge on a central square, as in an urban grid, surrounded by the different buildings with separate uses, so that the ongoing activities don’t interfere with one another. 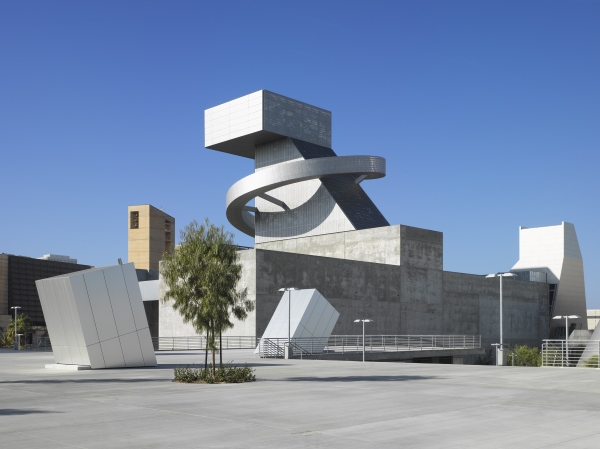 Inside the square, the most striking building because of its height and shape is the tower. This tower, together with the two towers of the modern cathedral designed by Rafael Moneo, defines the new city skyline. Around it, a ramp rolls up. Initially, this ramp was to connect the ground with an astronomy observatory that would be located on the roof. Even if this option was discarded, part of the ribbon surrounding the building was kept. The second architectural element that stands out is the library, a slanted truncated cone. By choosing this geometric shape, the authors intended to emphasize the idea of a condensed learning space. 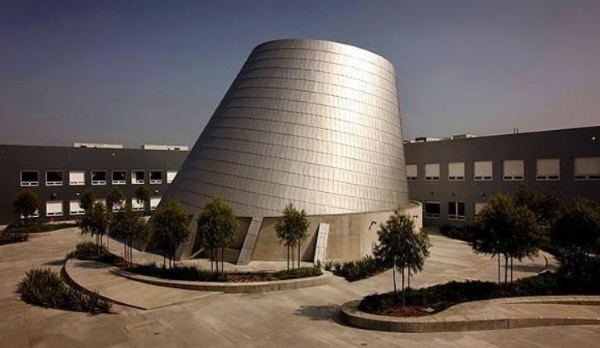 1,800 students are distributed among four academies, one for each school specialty. These are functional buildings which share the same design, with a central hall that also serves as an exhibition hall and a sweeping staircase. The grand entrance to each building is the link with the monumentality of the campus landmarks. 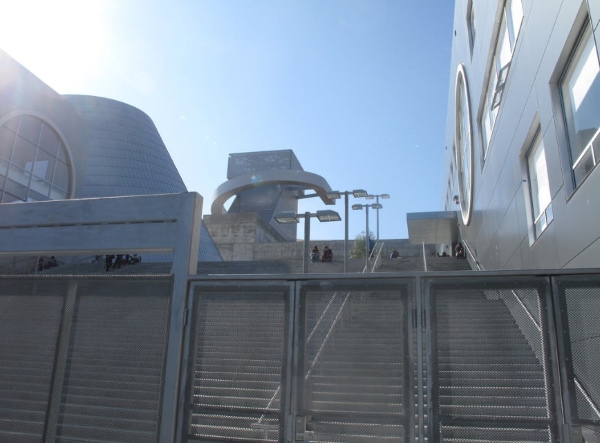 The grand open stairs give access to the buildings of the academies. Image: Margaret Napier

These constructions are similar to one another, except for the one bordering the Grand Avenue – the visual arts one – which has dark grey powdered coated aluminum panels. Those dedicated to music, theater and dance are finished in gray plaster. Even if neutral tones predominate in all their interiors, the furniture of each academy brings a customized touch of color, emphasizing their identity: red, yellow, green and purple. 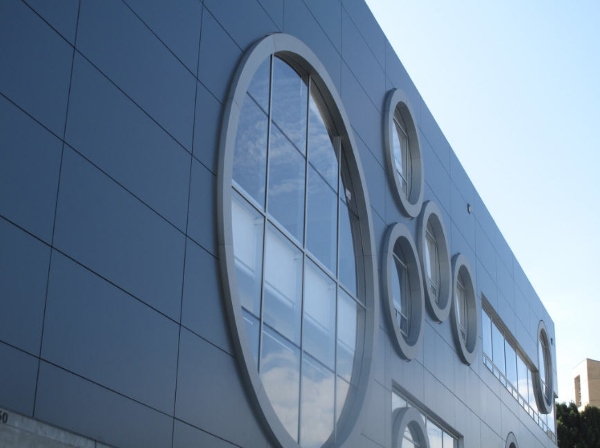 Besides the design and the height of these buildings, the passers-by can find another point of interest in the large circular windows dotting the facade. Some windows let you glimpse the activities taking place inside, while students get a vision of the outside which is far from the one offered by a row of traditional windows. Nothing is conventional in a school dedicated to the arts. The largest number of circular windows is located on the main façade. Due to budgetary constraints, the number of windows was reduced in the academies. Budget control in a project is as important as design and technique. In this case, the estimated cost was 172 million dollars. 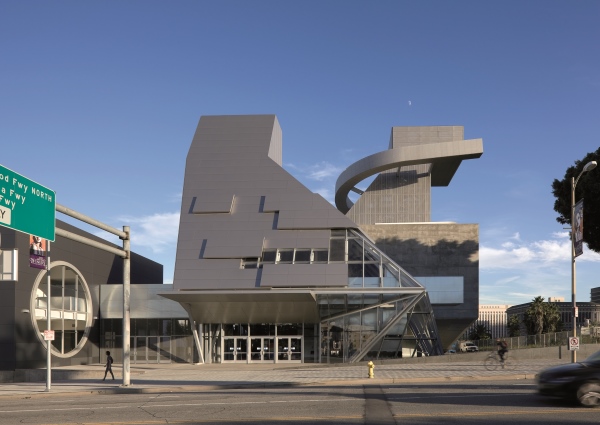 The star of the school building is the theater, for its size and the high quality of its facilities, suitable for high-level performances. The lobby leads to an auditorium with an orchestra pit, fly-loft and back stage. There is also an outdoor amphitheater. In addition, the flexible theater serves as black box, with different scene settings and sizes as required. While some of the campus buildings stand out for their aesthetic and metallic texture, the theater makes the difference. The concrete used in its construction is visible, both externally and internally. Its lack of windows gives it a solid appearance, only softened by the glazed lobby. 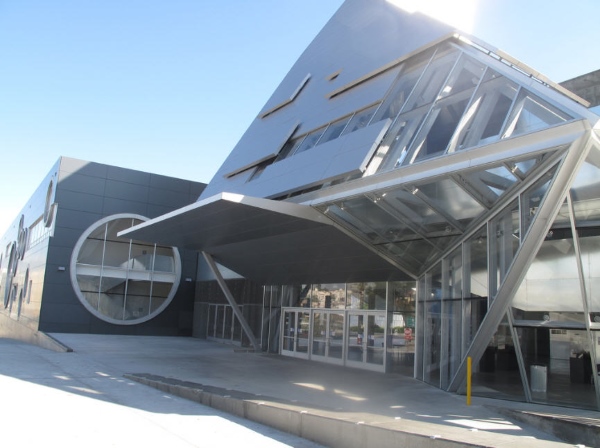 The main room can accommodate 957 visitors, a number far superior to the one admitted by traditional school auditoriums. Both theatrical and musical performances can be carried out in the best conditions, since the room has been equipped to ensure good acoustics. At the top, heavy drapes were placed, which can be drawn to modify the effect of reverberation. 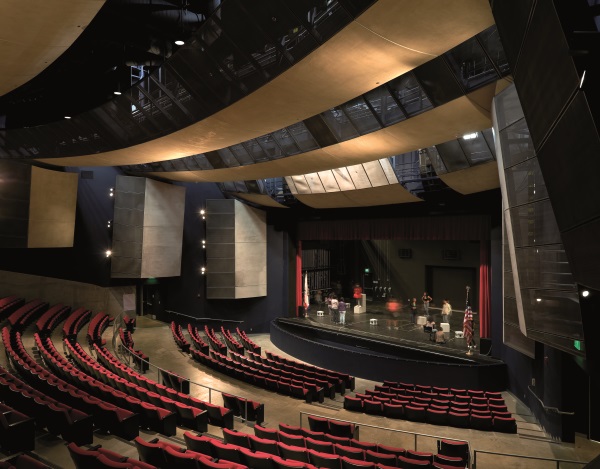 The theater has a seating capacity of nearly 1000 spectators, and excellent facilities. Image: © Duccio Malagamba.

Acoustic clouds have been placed on the ceiling and on the walls, in undulating rows, so that they can reflect the sounds coming from the stage. They are made of a curved plastered front and an acoustically transparent back metal panel. Behind them hide some ducts, as lighting wires and fire sprinklers. The background walls were painted in midnight blue. Due to the intense seismic activity of this area (level 4), the construction of the school meets the corresponding safety requirements.

The terrain on which the campus stands has a height difference of 12 meters and it has been divided into three terraces. The structure of some buildings is partially or completely buried and the material used here was concrete. Steel was mainly used on the above-ground structures. As for the theater, since it must have special acoustic characteristics, concrete walls with primary and secondary steel framing systems were used. 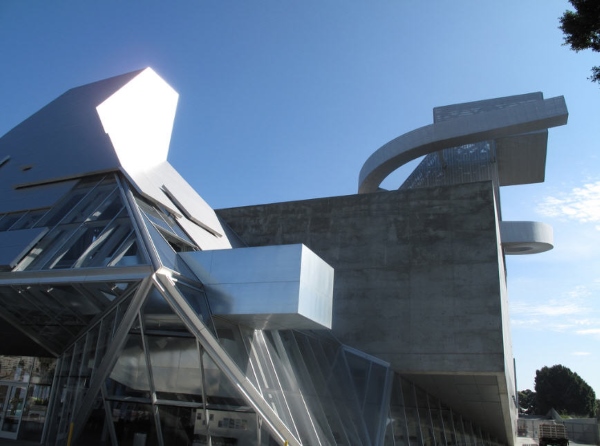 COOP HIMMELB(L)AU architects have used Rhino to “describe the geometry of the sculptural buildings and to detail and economize them in terms of their structure and building systems, from their outer skins to secondary framing, primary framing and inner wall surfaces”. They created a model in Rhino 3D and updated and maintained it throughout the process. This model was shared with project engineers during the planning phase and with contractors before the execution of the work. The Rhino model was the basis for other computer programs that were used for aspects such as structural design or lighting simulations. We at VisualARQ find particularly interesting that the studio stated that, thanks to the methodology they used, they “guaranteed the most efficient and effective system designs, reduced margins in extracting quantities of building materials, secured efficient space planning for HVAC ductwork and precise surface tiling and detailing in all trades during execution to secure the high quality design through construction”. 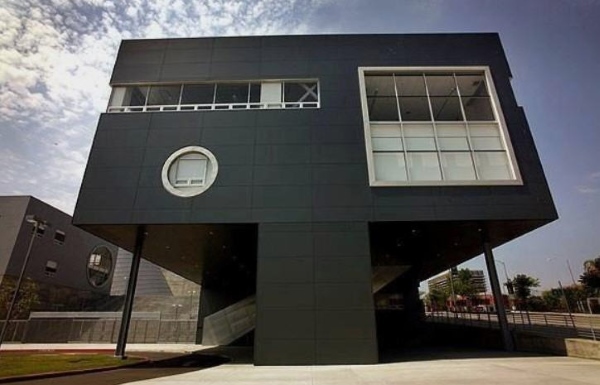 The complexity and variety of this building rooms, levels and heights make VisualARQ a powerful tool when it comes to create the building in 3D during the design process, specially when working at different levels using the Level Manager. Also, the building contains a big number of circular windows, which could be easily inserted and customized by the parametric windows provided by VisualARQ. To reduce energy consumption, no separate air conditioning units were placed on the building roofs. Instead, there is a cooling and heating central plant (also used for water) that feeds the units on the roofs through closed circuit and an insulated underground piping. In the design of the buildings, the layout of ducts was carefully studied to make them highly efficient and the volume of refrigerated spaces was reduced by distributing them properly according to their purpose. The air conditioning can be controlled independently in each classroom. The windows are practicable in virtually all workplaces, which maximizes the entry of light and natural ventilation. 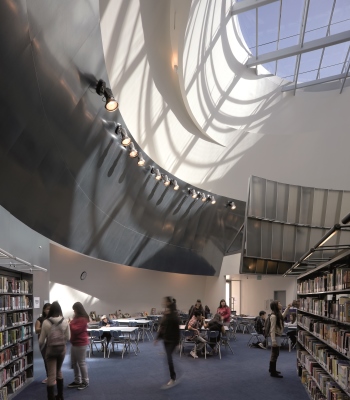 The library, a truncated cone shape, is topped by a skylight. Image: © Duccio Malagamba.

The case of the library is special: in order not to impair the effect of the circular glass skylight that tops the truncated cone shape, the corresponding outdoor unit has been placed in the nearby academy of dance. Since the cooling must reach the users without being wasted along the top of the cone, the architects created a sub-floor plenum space which feeds air through floor registers. The ducts for the return air are placed behind the walls and above the visitors’ heads. In this way, only half of the building gets cooled and the skylight is not damaged. When the school was built, it was given the name of “Central Los Angeles Area High School 9 for the Visual and Performing Arts of the Los Angeles Unified School District (LAUSD)”. Now, it is known as the “Ramon C. Cortines School of Visual and Performing Arts”. If the school purpose was to inspire students interested in creativity and Visual Arts, there is no doubt that it has succeeded. Like no other in the city. In a school, talent does not depend on the place, mastery does not come from materials, execution skills are not related to the design… However, some of the pride of belonging to a school can indeed derive from its architecture. School: the beginning of a journey. 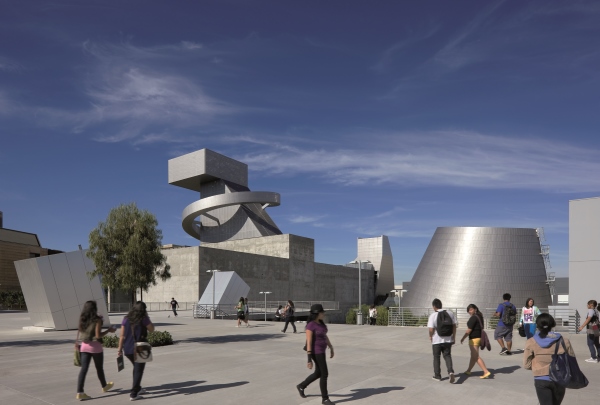 Visit our Facebook page and stay tuned with VisualARQ news.