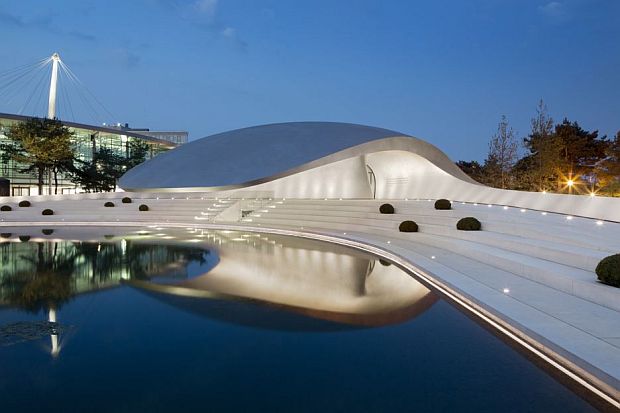 The use of Rhino software in the Porsche Pavilion of the Autostadt in Wolfsburg, has given a building that equals its character of sculpture and the image of the brand it represents. The monocoque design by Henn Architekten stands out for its lightness and the strength of a self-sustaining structure covered by perfectly uniform steel sheets. Porsche, a brand with those connotations of elegance, speed and exclusivity deserves that the building representing the company also displays those values. In VisualARQ we firmly believe that HENN Architekten have succeeded with the Porsche Pavilion, the architectural design made with Rhino that we discuss today. The Porsche Pavilion in the theme park Autostadt in Wolfsburg (Germany)

The site is not irrelevant, it’s the theme park Autostadt, focused on automotive industry and based in Wolfsburg (Germany), whose motto is “People, cars and what moves them”.  Porsche Pavilion was preceded by other buildings dedicated to brands like Lamborghini, Audi and others. Within the theme park, the location of the Porsche Pavilion is particularly good, next to an artificial lagoon. The authors have obtained the most out of the place thanks to two factors. First, landscape architects WES & Partner Landschaftsarchitekten have integrated the construction into the whole through natural elements. Secondly, one of the most defining features of the design is a cantilever above the lagoon, creating a visual connection between them. You can tour the outside of the pavilion reflecting on the water or sit at its feet, in the seats along the lagoon. 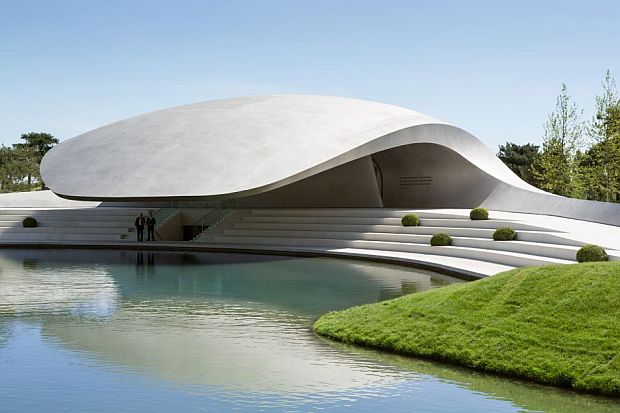 The image we may have of a Porsche car is of elegance and fluidity of lines. That is exactly how we could define the aesthetics of the Pavilion. The smooth curves have a uniform metallic finish. The simplicity of form leads us to the essence, not frills or embellishments. 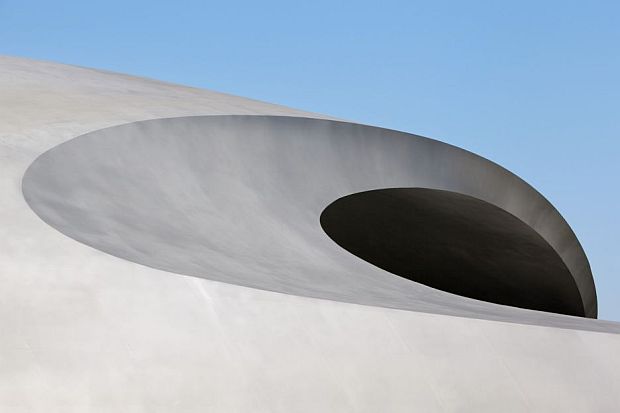 The roof is asymmetrical and extends into an overhang over the lagoon. A dynamic and fluent image of contained speed, like a wave that rises to reach the shore, bends over itself and stops. The curves described, with different radii, are one of the elements on which Rhino offers outstanding results. HENN Architekten establishes a parallelism with the light monocoque constructions of the automobile or aeronautics industries. For this building, the piece was manufactured in a shipyard. In this type of construction the building envelope supports the structural load. Since the cantilever of Porsche Pavilion measures 25 m, it was required that the structure, carefully calculated, was tested several times in a wind tunnel to ensure its stability.

The pavilion cantilevers outwards up to 25 meters

So that the shell can fulfill its function of being self-sustaining, the upper and the lower covers are welded to the central structure. It weights 425 tons and, in order to absorb the expansion of the materials, it rests on elastomeric supports, while the rest of the construction is supported by reinforced concrete that cannot be seen. 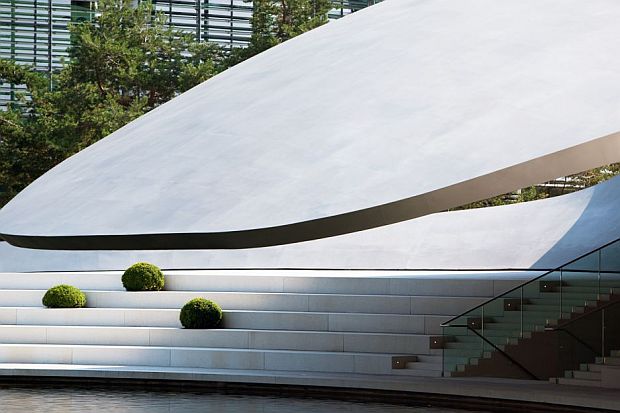 The stainless steel roof is a self-supporting structure

620 sheets of matte stainless steel compose the cladding. They provide an appearance like a building composed of a single block. In order to support the withstand loads of construction, the thickness of the steel sheets varies between 10mm and 30 mm, depending on their position on the roof. Since their curvature changes depending on the point of the roof on which they should be placed, it was necessary to reference several points for each piece, so they could fit like a puzzle on the perfectly regular surface of 2.550 m2 of this Rhino project. 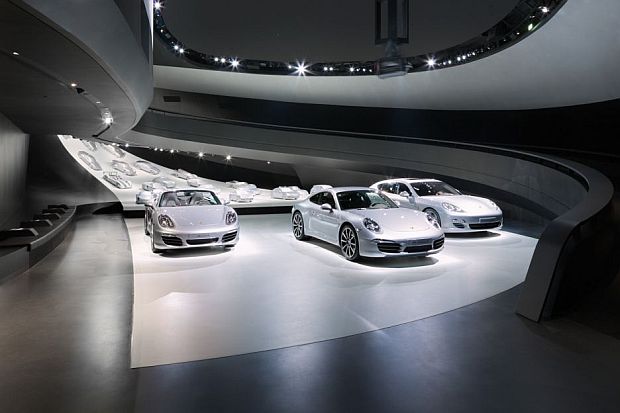 The sculptural exterior looking that reflects the ambient light and varies in appearance with its changes, contrasts with the interior in which the black color dominates. The exhibition area occupies 400 m2 and inside the pavilion an elliptical ramp stands out, where there are displayed silver replicas to scale 1:3 of the different models in the history of Porsche as well as some original vehicles. The result is that vehicles become jewels whose brightness stands inside a black case of curved shapes. If a vehicle of this brand is not within your reach, the Porsche Pavilion by Henn Architekten, it is indeed. It is the equivalent in architecture to fine jewelry. (Article by M.A. Núñez)