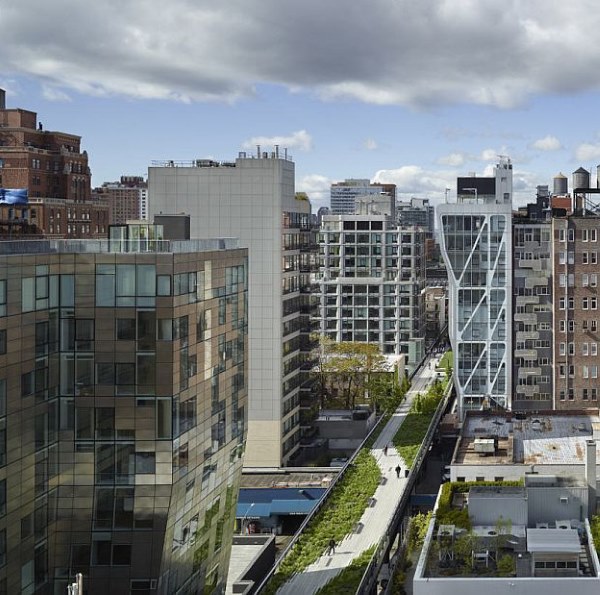 VisualARQ enjoys the building duality: a luxury condominium for residents and an interesting architecture for New York pedestrians

The slender architectural design in steel and glass of the HL23 condominium in New York, a project by Neil Denari, has been chosen by VisualARQ as an example of the use of Rhino software. The building shape has been adapted to the High Line. At its base, the surface area is smaller than at the top. As the building gets higher, it expands and thus manages to provide more surface area. The top is about 40% larger than the base. The effect achieved is aerodynamic, lightweight. The building shrinks at the bottom to accommodate the High Line. Despite this, it does not give the impression of receding or setting back: it nicely adapts to the tracks with a cantilever. It also has a sculptural appearance, given by the design of the facades. Two of them are covered with low-iron glass and another one is covered with stamped stainless steel. The theory is that good architects like challenges. The reality is that they prefer a good plot, the best construction conditions and the best software available for architecture (are you thinking of Rhino?). They would also like to design a museum or a building of social prestige… but few of them can actually carry out that dream. Conformism? Never! We believe that we must take advantage of the elements we have to make your architectural project go beyond the established requirements and make it talk about you and the place where it stands. 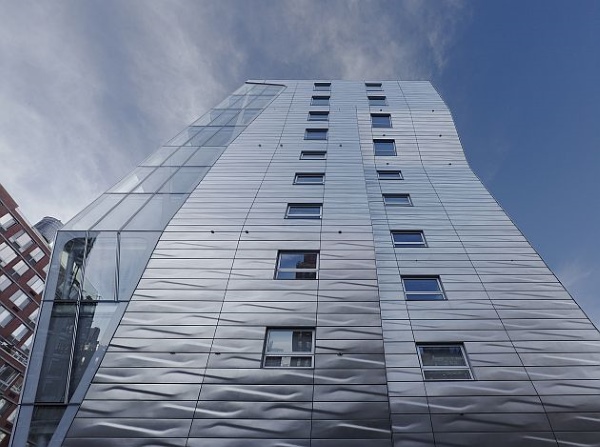 VisualARQ presents the use of Rhino software in the architecture of Neil Denari. IMAGE: Fotoworks, vía NMDA

Today we are going to see an example of architecture that has been developed using Rhino software, showing that big inconveniences require big solutions: the HL23 condominium by Neil M. Denari Architects. You might be asking yourself: “Why big inconveniences?”. A building project in New York and, even better, in Manhattan, a fascinating and continuously bustling place, does not seem to be an inconvenience, but a reward. Well, things are not as good as they are supposed to be. If you know the city, perhaps you’ve approached the High Line. More than 2 km covered by an old elevated railroad track, now a green space that has become an urban promenade and a park on the heights which will be extended in the future, with an interesting architecture around it. It is a very pleasant walk for pedestrians but you would not look at it sympathetically if the plot you were assigned was right there. 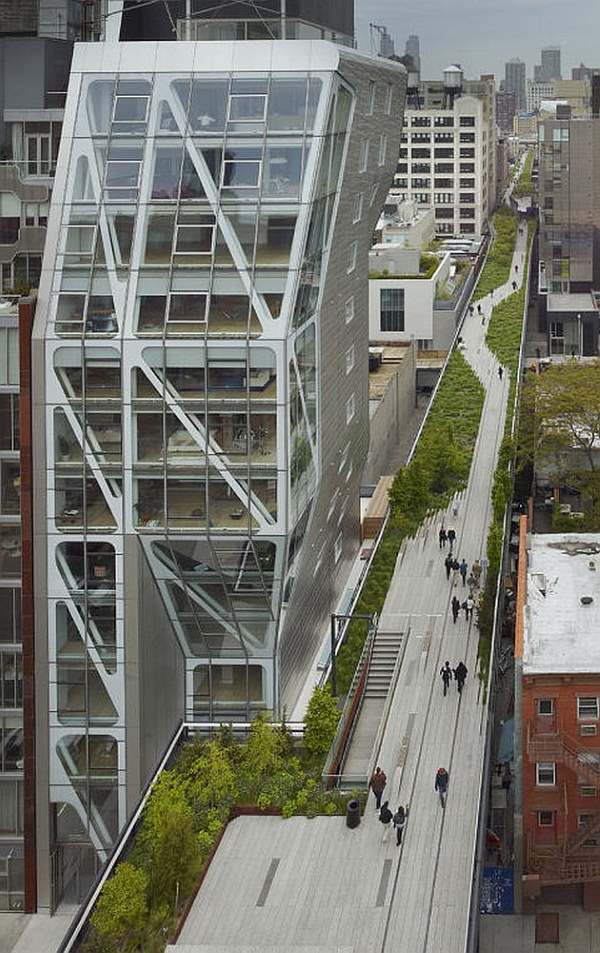 Remember, you are in Manhattan, this is not any site. A promoter is asking for a luxury condo building so, logically, you must exploit every inch of ground. The larger the surface, the greater the profit. However, the site is stuck to the High Line. You must strive in order to obtain the habitable surface the promoter wants and to convince the wealthy purchasers of the apartments that the track is not a nuisance. That’s why we like the results that Neil Denari has achieved. An attractive and different construction. It is not just a building for residents but it also has become an iconic building in the area. A building whose presence is enjoyed by passersby who, thanks to the height of the High Line and being less than 3 meters away from the second floor, can have different perspectives. 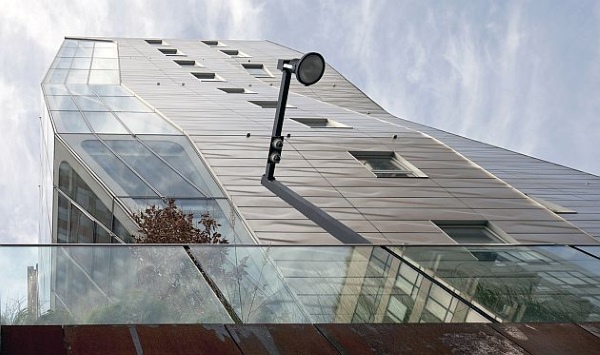 Passersby are at the same level than the HL23 second floor. IMAGE: Fotoworks, vía NMDA

If you look at the pictures, it seems that the track is literally embedded in the building or that the building has grown around it. It is not an optical illusion, the building has been adapted to the High Line. At its base, the surface area is 12m x 30m. As the building gets higher, it expands and thus manages to provide more surface area: the total built area is 3,642 m2. The top is about 40% larger than the base. An additional advantage is that the building looks higher than it actually is. It is about 50 m high but it looks higher due to the slenderness of the design. The HL23 represents a really uncommon choice. Usually, we see wider buildings at the base that get narrower as they increase in height, giving an impression of solidity. Here, it is the other way around: the small base expands and the effect obtained is aerodynamic, lightweight. The building shrinks at the bottom to accommodate the High Line. Despite this, it does not give the impression of receding or setting back: it nicely adapts to the tracks with a cantilever. 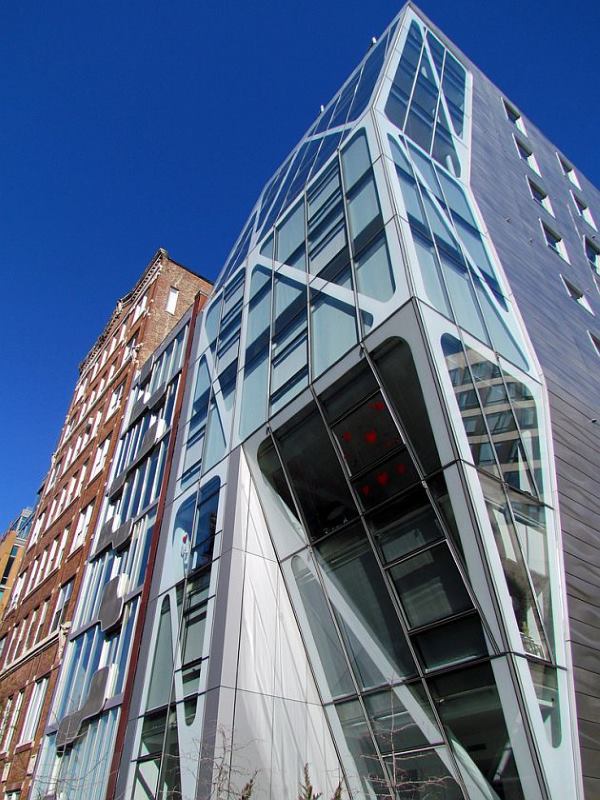 The architectural design of the cantilever increases the building slenderness. Image via flickr

It also has a sculptural appearance produced by the design of the facades. The north and south facades are covered with glass, while the one facing east is covered with stamped stainless steel. A building with several different perspectives, depending on where the viewer is located. In the glass facades, a low-iron type of glass was used, since it is extremely clear. The panels are the largest used in this type of buildings and they measure almost 6 m2. One of the aesthetic features that most draw the attention are the diagonal cross braces of metal that have been left exposed and that can be seen behind the glass. Since they are inside and covered with white ceramic frit, they seem smooth and rounded, an effect they would not produce if they were placed on the outside. In addition, they act as structural supports, making the presence of columns in the diaphanous interior unnecessary.

The diagonal cross braces seen from the exterior are located inside the building. IMAGE: Fotoworks, vía NMDA

The east facade is coated with 500 stainless steel matt panels, 50mm thick, which act as thermal insulators. Each piece measures 3.4m by 0.5m and is placed on a steel and aluminum frame. This facade has another distinctive feature: it splits apart, dividing the building vertically. Therefore, the resulting shadows have nothing to do with those projected by the surrounding buildings, it literally projects a different image. 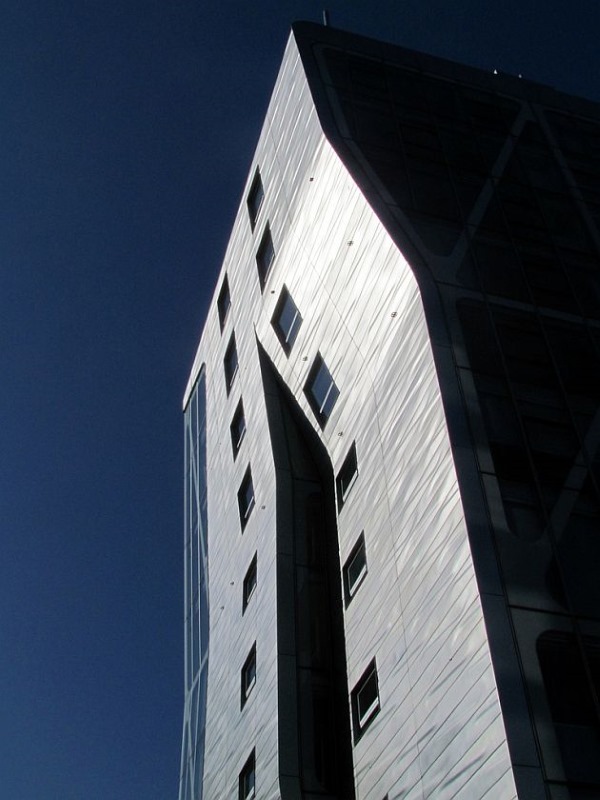 The glass and metal facade splits up in the east side. Image via Flickr

If on the other facades, metal brackets are left exposed, here the open joints are visible. They visually fit perfectly with the materials and type of construction of the elevated railroad. 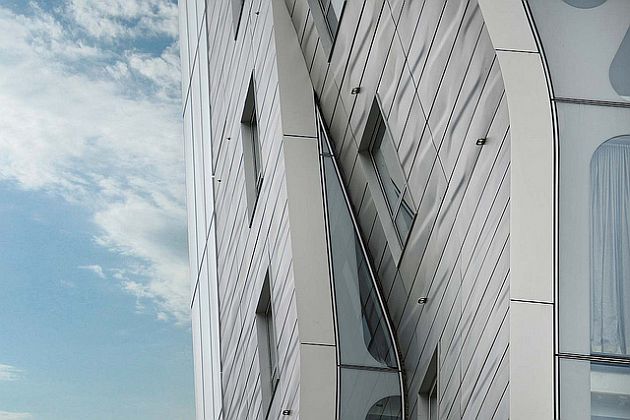 The building is 14 stories high, 9 of them dedicated to apartments plus 2 duplex. There is only one apartment in each floor and each apartment is different from the others, so they also offer this kind of exclusivity. Obviously, these luxury homes feature quality materials and their large windows, floor to ceiling, provide excellent views of the High Line. 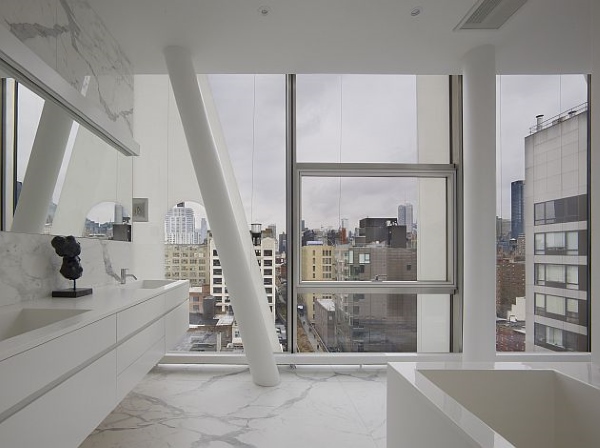 If residents aren’t interested in the views or do not want to be seen, they have motorized shades to cover the glass. Some windows are practicable. In any case, the apartments are arranged in such a way that the private areas are oriented towards the east facade. This facade is covered with folds of metal so it has smaller windows and privacy is guaranteed. If, on the contrary, discretion is not what they are looking for, they can just use the rooms oriented towards the south facade. 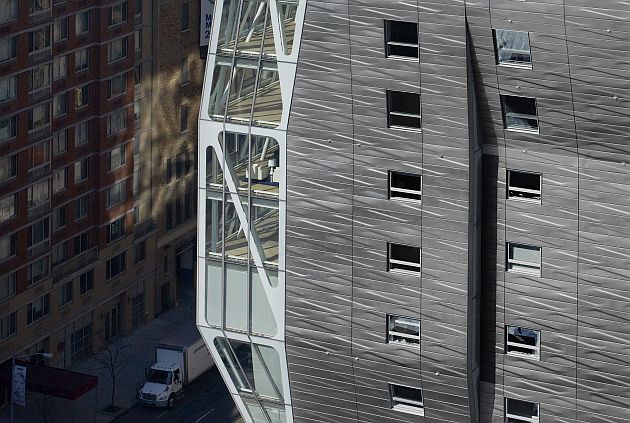 We at VisualARQ do not seek discretion but good architecture made with Rhino. Neil Denari did an excellent job. Away from our possibilities as potential residents of the condominium HL23, but close to architecture lovers. We suggest you to add it to your to-visit list in New York. Have you already been there? Tell us about it on Facebook. (Article by M.A. Núñez)