How to use Rhino to create an attractive architecture in… a parking!

There are architectural projects that start with a big advantage from the moment in which you receive the assignment of their construction. Gorgeous facilities or homes that allow you to let your imagination fly. In the box of chocolates that Forrest Gump could offer to an architect, these would be gone quickly. At the bottom of the box would remain those without an appealing content or wrapping. Would anyone choose a chocolate if he/she didn’t like either the inside or the outside of it? Certainly not. But the story of this film now has an architectural moral with Rhino: forget prejudices, dare and enjoy success. 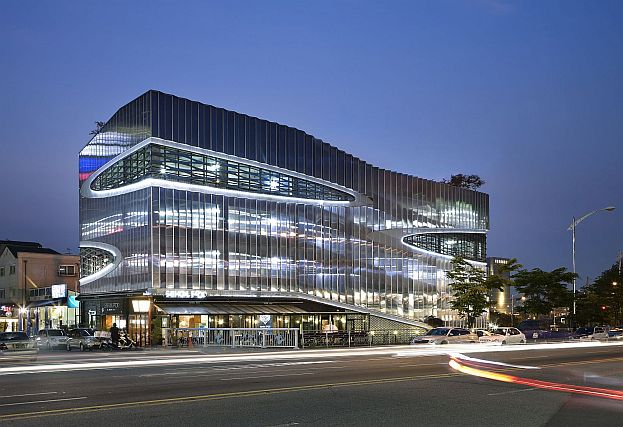 The story begins when you leave your country to study and work as an architect on the other side of the world. One day, you receive a request from a relative. He is having problems with the development of a project and asks for your cooperation. You decide to take a chance, so you fly thousands of miles to face the apparently least appealing chocolate in the box: to build a parking lot. Now try to think about the ones you know, and tell us: would you enjoy the idea? When Jeong-Hoon Lee (JOHO Architecture) visualized the Herma Parking in his mind, he foresaw the potential of something different and built an icon, easily recognizable in the distance, which made him win the Young Architect Award in his country, South Korea. Let’s start by the implications of the official restrictions in that country. Of the total area, only 20% was permitted for commercial use, which leaves a volume of 80%, predictably impersonal and aesthetically irrelevant, for the parking of vehicles. What could happen with such a massive building occupying nearly 2,600 m2? Would it hardly attract visitors? Could it degrade the urban area? Would it become a barrier in the middle of the neighbourhood? Would it be so “ugly” as usual? In spite of these discouraging premises, Lee achieved just the opposite. 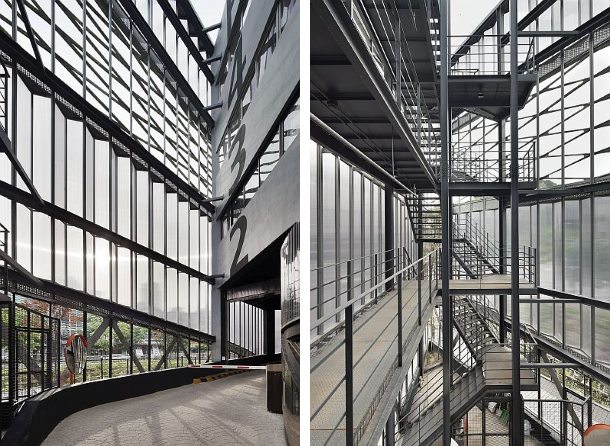 How? By setting his sights on 4 objectives: The chosen site lies next to a river channel and a very popular area. Not only does the parking not degrade the area, but it adds facilities to it, offering a shopping space located on the first floor. 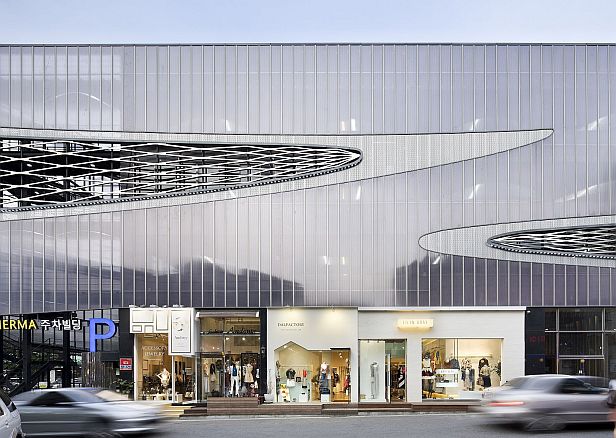 The architectural design of the parking emphasises the commercial area. Image: Sun Namgoong (via JOHO Architecture)

Drawing the attention on the leisure part and not on the parking was achieved by enhancing the façade that opens into the channel and, at the same time, making a discreet rear façade so that it doesn’t clash with the surrounding buildings. The main façade design reminds of a car radiator grille, an ironic nod for a car park. Openings at different heights allow natural ventilation and outside views in several directions. The symmetrical shape of drillings is in contrast to the asymmetry of their placement.

The façade facing the river has a triangular shape. Image: Sun Namgoong (via JOHO Architecture)

Along the canal, the building has a triangular shape and is covered with polycarbonate sheets that fold in 10 different angles, ranging from 60 to 150 degrees. Each fold is different, and so are the light and the reflected images. This creates wrinkles that, according to Lee, evoke the vehicles passing by on the adjacent street. The rear façade panels have been placed without relief. VisualARQ is focused on creating free form architectural designs, and we’ve been attracted by the ones developed in this project. A priori, a parking has many potential drawbacks but, at least, it has an advantage: it does not need the insulation that other buildings require. This opens up many possibilities in terms of experimentation and material choice. Choosing a five-layer polycarbonate enhances the design and is the key to make it work. The inner layer is white, the outer one is purple and the IR and IV coating increases the light diffraction. This way, as the day goes on, the tones of the façade vary: from white when the sun falls directly, to violet some hours later, to gold tones at sunset, to urban lighting reflections at night. These panels combine with a perforated frame of stainless steel and together they form a geometric pattern in which they mutually influence each other. Variations in polycarbonate angles mean that the size of the holes that form the metal frame also changes and, in turn, that modifies the position of the zinc galvanized pipes supporting them. This is a parametric approach, in which the pipes act as structural nodes. 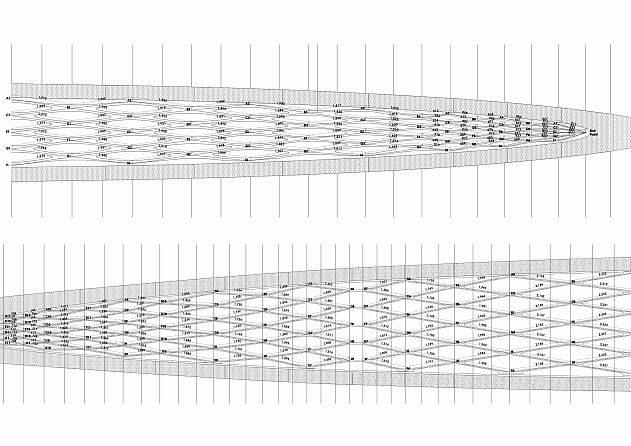 The function of polycarbonate is to reflect light and images, whereas the function of the steel design is to give shape to the building, glimpsed through the openings. Polycarbonate is inexpensive and easy to manufacture. The maximum length of the panels is 12 meters, the measure fitting the container which carried them, and each of the 635 units has slightly different sizes. In addition to the 635 polycarbonate panels, CNC cut steel panels were also used in this project, creating more than 930 variations in size based on a diamond pattern. The complexity of these multiple variations in the design were extremely easy to solve using Rhino software. 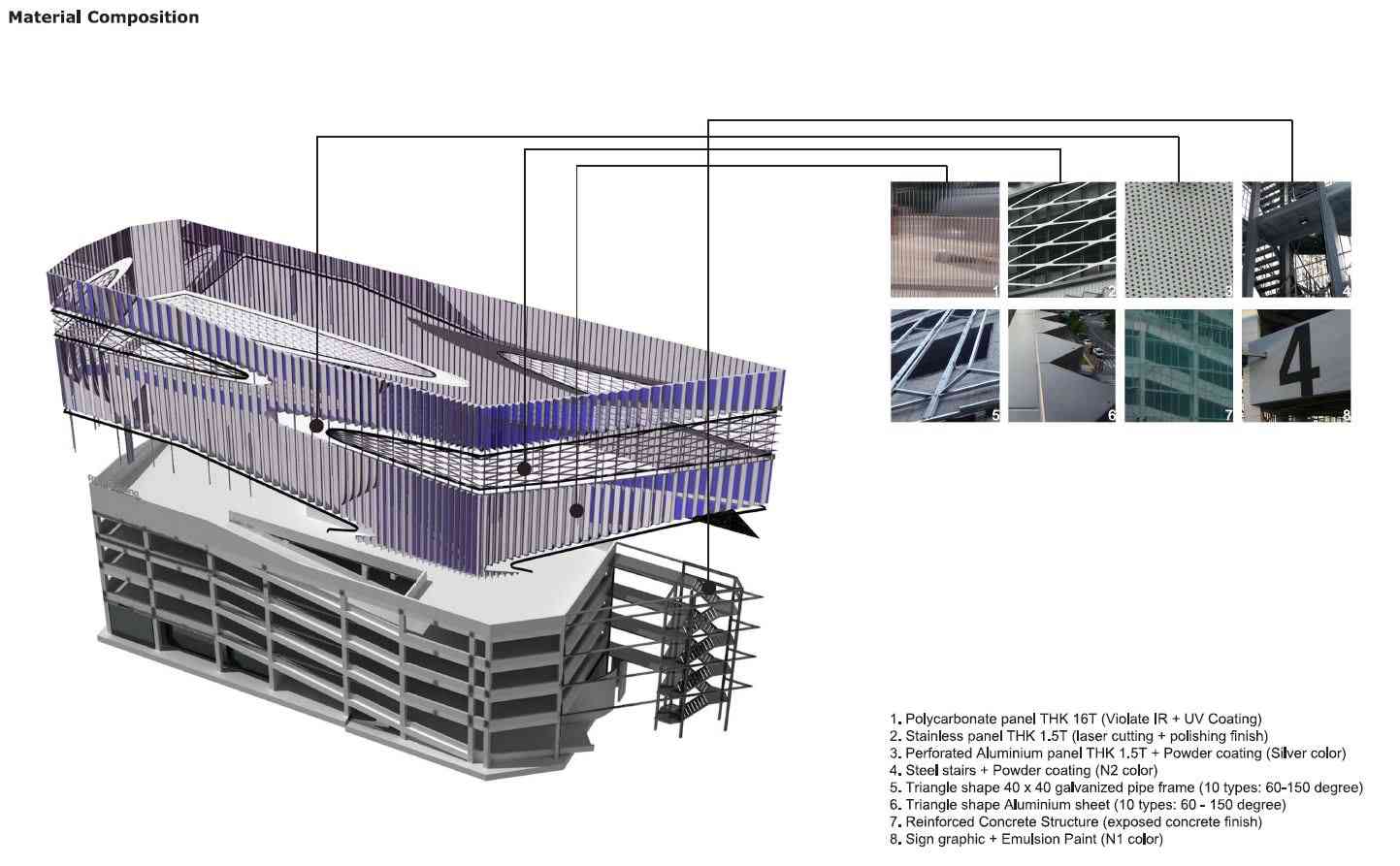 When Junghoon Lee was awarded the best young architect prize in his country, the jury described him using these words: “An architect who constantly thinks about ways to improve architecture while dealing with Korea’s particular architectural issues, Lee solves problems in many different ways and then thinks again about the lessons learned from these problems, which is more proof of an exemplary young architect’s attitude.” Here lies the key to success when you are offered a box of chocolates: think differently and improve what has been achieved in the past. Take risks.

Jeong-Hoon Lee received a National Architecture Award for this project, in which he used Rhino software. Image: Sun Namgoong (via JOHO Architecture)