When an architect wants to know what solutions to his/her design and creation problems VisualARQ can offer, our series of videos of Ville Savoye can be a good introduction. Obviously, the software potential is much broader but still, we manage to present a project in different chapters that allows an approach to our technology. 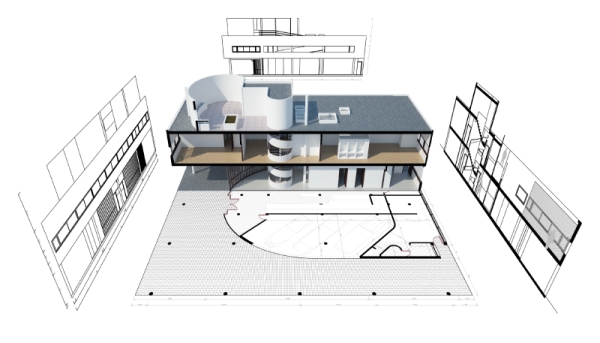 When choosing a landmark building, we had hundreds to choose from and we selected Le Corbusier “Ville Savoye”. We were attracted by the building but also by the author, the man who went beyond the construction plans and created internal and external landscapes acting out of freedom and lack of conventions. A man breaking new ground matches well with a technology that also breaks with the traditional way of creating architecture. With this background, it is inevitable to pay attention to the Le Corbusier. An atlas of modern landscapes exhibition, organized by the Museum of Modern Art (MoMA) in New York in collaboration with Le Corbusier Foundation in Paris. In New York, it attracted more than 400,000 people, including visitors outside the architectural world, since Le Corbusier work and approaches raise interest beyond technique. The following exhibition stops in 2014 will be Barcelona (January-May) and Madrid (June-October). There is no doubt that, for visitors who do not belong to the architectural world, the scale models are one of the most attractive aspects of the exhibition. Some of them correspond to buildings that, despite not having being constructed, are still very interesting. In fact, despite being an architect of enduring fame, Le Corbusier went through periods of great professional frustration. His projects were rejected, sometimes they were misunderstood, other times they simply did not fit in the decision makers preconceptions. He didn’t gave up, though, nor changed his perspective. He didn’t change the way he saw his work and went on exposing his approaches during the several lectures he attended, sure of the path he was taking. Charles-Edouard Jeanneret (Le Corbusier was his pseudonym) was born in Switzerland in 1887 and settled his studio in Paris at the age of 30. From that time he developed an intense activity in several continents, creating over 400 projects, of which 75 were built. The exhibition includes works covering a period of over 60 years and allows you to see Le Corbusier evolution throughout his long career. The first thing that catches your attention is Le Corbusier modernity. When Le Corbusier began his professional activity, machines and technology had gained full ground. Technology had suddenly taken a giant leap and optimism caused by mechanization reached the whole society. Optimism came from the progress that seemed to announce a perfect world but, at the same time, there was also a feeling of prevention towards the many changes that were going beyond mankind’s potential, which had been the measure of all things. Le Corbusier fell within the first group, those who had confidence in the new world opened up by technology. This new world gave Le Corbusier the security to believe that the time to remodel buildings and even cities had arrived. His global vision could be developed more easily outside “Old Europe”, in countries where there was still much to be done. Le Corbusier would go from America to India leading projects and writing texts that would become references for modernity. “Le Corbusier. An atlas of modern landscapes” highlights the importance of nature and landscapes with respect to buildings and shows how Le Corbusier tried to change these relationships configuration to create new ways of living. The “landscapes” referred to by the exhibition title are the territories that he was longing to transform: architectural landscapes, domestic landscapes and the landscapes created by objects. Both found objects and objects which were created by Le Corbusier as an architect, urban planner, interior designer, sculptor, painter, writer, editor, photographer and filmmaker. Let us now turn to the works. Among his varied and huge works, we at VisualARQ have selected four projects from the exhibition. Those which succeeded are widely known, so we have included two projects that never came to light and remained in the form of plans or models, but still represent the author creative force.

Palace of the Soviets 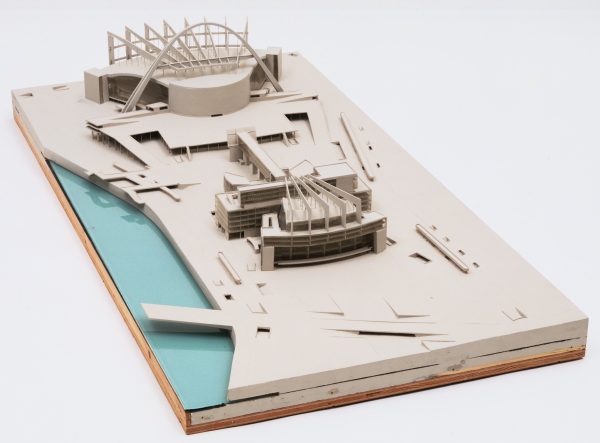 In 1932, during the Stalin era, Le Corbusier presented a daring project for the Palace of the Soviets design competition. This palace was never built. The dimensions were gigantic, in consonance with the period and its ideology: an outdoor esplanade for 50,000 people, two auditoriums – one for 6,500 attendees and one for 15,000 – and a large administrative building. The space for vehicular traffic was at a lower level, never in contact with pedestrians, and the parking area was under the auditoriums. The distribution of the flow of visitors through a circuit with separate entrances for vehicles and people was the key. The administrative offices were concentrated in a large detached building, from which ramps leading to the platform outdoors departed. Not a single step in the entire project. Eight vertical beams stood out, embedded between inclined pillars and a large concrete parabolic arch. Reportedly, the defeat in the competition greatly affected Le Corbusier, as he had high hopes in the possibilities offered by the new USSR (where a new society was being built) for his urban development projects, which were seeking a total renewal of the urban landscape. 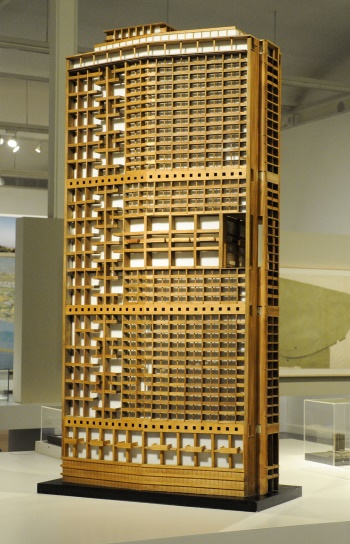 In the late 30s, Le Corbusier proposed some urban plans for the port city of Algiers, which were not carried out either. However, he managed to raise a few residential buildings and industries. In this skyscraper project for La Marina district, common features of Le Corbusier work appear: the brise-soleil and the lodge. He had planned a vertical air circulation system, protection from sunlight and people and vehicle circulation flow, among others. A set of measures that, if they had been adopted, would have completely changed the character of the city. 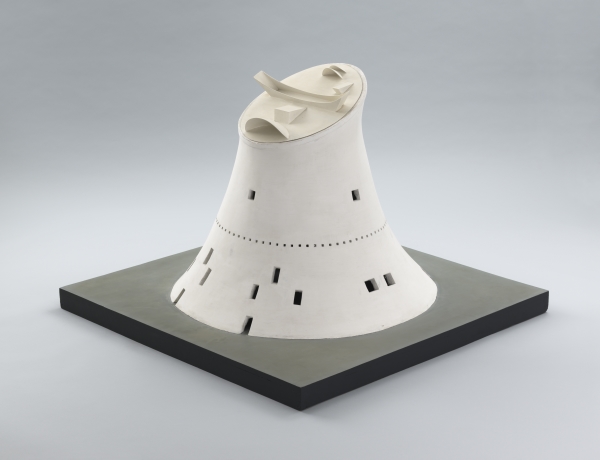 Le Corbusier was interested in building cities and he was aware that this would be easier to achieve in countries under development or mutation. After several unsatisfactory attempts in the Soviet Union and in the United States, in 1950 he was given a custom assignment. The post-colonial India was in full period of national self-assertion and the Punjab State wanted to build his new capital: Chandigarh. The model shown here corresponds to the Palace of the Assembly roof structure, in the form of a truncated bell. Plans and drawings of this project can be seen in the exhibition. One of them contains the key to interpret this strange half-cone: Acoustic Means. 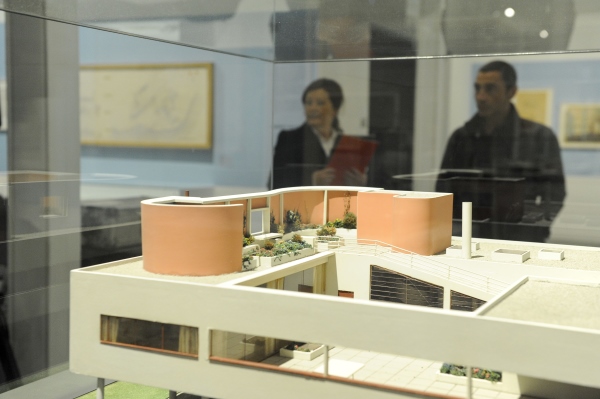 We close the circle with one of Le Corbusier most iconic buildings: Ville Savoye. A private house in a privileged location, surrounded by forests, a few kilometres from Paris. It was intended to to be reachable by car and was made functional for vehicle access. Thousands of university students in architecture schools have studied the three sections connected by ramps of this house: pilotis, a middle floor plan of straight lines with uninterrupted openings for windows, and an upper floor with free forms. Designed in 1928, Ville Savoye is still modern because of its timelessness. Charles-Edouard Jeanneret developed 400 projects, of which 75 were built in twelve countries. They may seem few, but they have been enough to make his vision of architecture last. He transformed himself adopting the nickname of Le Corbusier for which he is known. He transformed cities and landscapes with his poetic imagination. You couldn’t expect less from someone who said that “Architecture is the wise, correct and magnificent play of volumes gathered under light”. 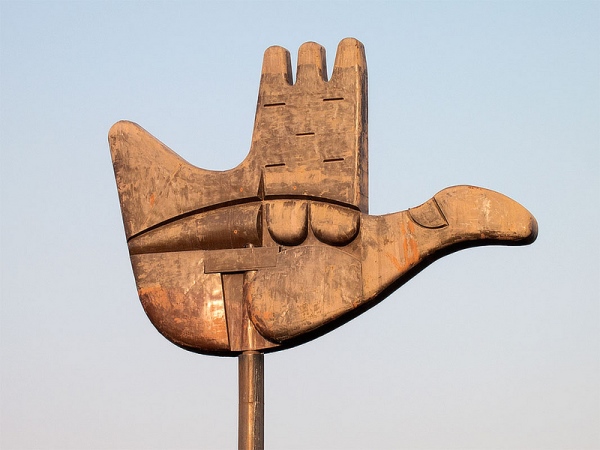 The Open Hand sculpture stands for the city of Chandigargh created by Le Corbusier motto: “open to give, open to receive”. Dimensions: 12,5 m wide and 8,86 m high. ©Fernando Stankuns in Flickr