Michele Calvano: “the real revolution was the connection of VisualARQ to Grasshopper”

Study of the roof for the extension of Venice Airport. Project in collaboration with ArFacade

His name is Michele Calvano, an Italian architect specialized in Reverse engineering of 3D models for design purposes. He has been chosen to open our new section of interviews with professionals that are using VisualARQ as a regular tool for their work. His long academic and professional career – he is an architect and researcher – has brought him to innovate and search for new solutions that meet the current market requirements. And then he found VisualARQ. How does he deal with new challenges? What does he expect from the future of architecture? What technical advances are envisioned? Keep on reading to know Calvanos’ perspective.

-How would you define your professional style?

-I am deeply interested in the study of shapes and the understanding of complexity. For complexity I mean the possibility of making constructible those shapes that cannot be ideally developed but that, properly discretized in pieces, give back a model very similar to the ideal one, but with the new condition of being buildable. I am fascinated by the relationships between the data that make up the project and the generative possibilities that manifest themselves by creating the right relationships between them: for example, to build a 3D model informed by GIS data, creating a BIM model for the city, so a tool for memory and management. My style is characterized by almost latent actions, often not explicated through forms but mainly characterized by the possibility to build dynamic and efficient models. The responsiveness of a model is mainly linked to the close relationship between input data and constructive action that updates the final output model.

-What kind of projects do you enjoy working on?

-In a very general way we can divide the architecture into extraordinary and ordinary. The problems to be faced for the two conditions are different. Extraordinary architectures have the same complexity as the shapes of design objects, but unlike these, they are bigger and require different technological solutions. Architectural skins must be water and wind resistant, they are supported by a structural texture and must guarantee thermal and energy performance. Ordinary architectures have shapes closely linked to the functions they perform, proposing elementary technological solutions. In the latter condition, the project is mainly solved by composing architectural elements in a functional and creative way. Both cases have in common objects that carry information; information that arises in the conceptual phase and accompanies the architecture, enriching itself up to the construction phase. Working on the management of information and its ability to generate shape is the part that interests me a lot. The visual programming languages and the contemporary link between them and BIM, allow more and more information to be catalogued and transformed into models.

-What is the most difficult challenge you have had to face in your professional career?

-The biggest challenge is to introduce the beauty and creativity of algorithmic procedures to those involved in idea and design. Using visual programming opens up a wide range of solutions for solving 3D modeling problems related to architecture and design. Some solutions may seem articulated, others more efficient, so the procedure becomes a real tool for solving the problems that allow the conceptual form to become architecture. The more efficient and robust the algorithm is, the more solid is the interoperability between the systems that make live the relationship between idea and production of the project, digitally prefiguring what will be the product built. Automated procedure for the construction of 3D models from spherical panorama. (video)

-How did you solve it?

-The discovery and study of languages for visual programming (VPL) allows the explicitation of algorithms for modelling with which to write procedures for the control of the project of architecture and design. The possibility of managing procedures and constructing conceptual forms from data of a different nature is the strength of VPLs, but at the same time it is their limit, since the design of details (therefore the construction of executive models rich in forms and data) requires the programming of inefficient algorithms and often not very robust. In architecture, the problem is partly overcome by the possibility of joining the nodal system used (Grasshopper in this case) to the BIM modelling procedures. The conceptual form generated, dynamic and responsive (as the data that constituted it varies, it changes and updates itself in response to the new conditions) is discretized into simple elements, input of BIM objects (beams, pillars, walls, doors, windows, etc. …), making a leap in scale, even at the level of information, this situation allows you to move from the conceptual model to the architectural mode. 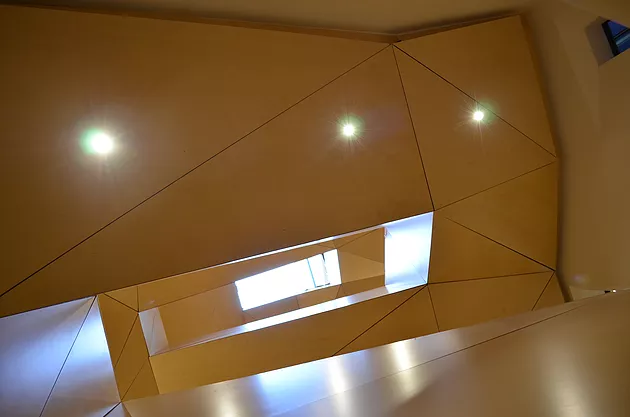 -How did you know about VisualARQ?

-I have always been a user of Rhinoceros, a mathematical software and extremely performing in the manipulation of nurbs. For this mode of representation Rhino is mainly used for the construction of models for design and eventually for the manipulation of architectural concepts. The search for add-ons that would bring the software to a better architectural performance made me know VisualARQ, initially only plug-in for Rhino. The main purpose was to find tools to facilitate the construction of architecture models and their layout by assigning graphic attributes to dynamic blocks. Later VisualARQ developed the information enrichment phase at different levels. But the real revolution was the connection of VisualARQ to Grasshopper. The combination of algorithmic design and BIM is now a standard, just think of Dynamo for Revit, Marionette for VectorWorks or the approach of Archicad to Grasshopper itself to remain among the most popular BIM tools. Architectural firms have recently understood its potential both in the construction phase of the model and in the data management phase. In my case having architectural modelling tools in Rhinoceros controlled with grasshopper, allows me to experiment between algorithmic design and BIM without interoperability limits. Any further BIM analysis can then be done through the export to IFC or through further add-ons present in Grasshopper for the transfer of information in Revit through live connections with Dynamo.

-What problems did you have before knowing VisualARQ and how did the tool help you to solve it?

-In addition to my professional activity, I am lucky to be involved in research, at the moment at the Polytechnic of Turin but until last year at the Sapienza University in Rome. After the earthquakes that hit central Italy in 2016, the Department of Architecture Disdra has set up a research unit focused on seismic risk. My contribution has seen the use of parametric procedures for digital modelling of the cities affected by the earthquake. Initially, the purpose was exclusively 3D modelling to return images of places that no longer exist. Automated procedures for the 3D modeling of Amatrice city after the 2016 earthquake using data from the network (paper). Since we had to compare ourselves with places that no longer had a physical consistency, we started from GIS maps present in the network or GIS elaborates present in the county technical offices. The informed maps allowed us to trigger the construction of algorithms written in VPL with which we proceeded to the semi-automatic drafting of expressive models. Then, starting from the reconstruction procedures, we are now trying to take a step forward by creating an urban model useful for seismic prevention. Obviously, this cannot be separated from the use of BIM processes. Automated procedures for the modeling of urban spaces with preventive purposes regarding seismic risk (paper.) VisualARQ allows you to go beyond the formal reconstruction of individual architectural artefacts by entrusting to what are simple horizontal vertical and sloping nurbs surfaces a value linked to architectural objects such as floors, walls and roofs. In addition to a decomposition and semantic recomposition, each object can be loaded with parameters and attributes that ensure a useful reading to the seismic prevention. The walls can be enriched with objects that both in elevation and section highlight the state of degradation, the joints between the walls can be diversified to assess the possible collaboration in resisting seismic events. The semantic recognition will identify the type of structure, whether frame or load-bearing masonry, etc.. The ability to control these operations within Rhinoceros allows maximum freedom and ease in modeling parametric architectural objects, breaking with the typical rigidity of other BIM software; this last operation is very important when working with historical architectures in which no standard architectural objects are present. Construction of a custom architectural object for the modeling of a historic building (video)

-What were your doubts or fears before you started using this software?

Proposed solutions for the facades of the extension of Venice Airport. Project in collaboration with ArFacade

-In your opinion, what are the trends in architecture and how will the designing tools evolve to adapt to them?

-What I notice when I look at the contemporary architectural landscape is that it is increasingly converging towards responsive buildings; responsiveness meant in two ways: on the one hand we have an explicit dynamism whereby the buildings, equipped with sensors, microcontrollers and actuators, change (referring to architectural video projections, dynamic panels, lights, formal transformations, etc.) with the variation of external conditions; on the other hand responsiveness is an implicit condition, which is in the phase of generating models, models that are made up of form and information, information that influence the design and construction processes. Consequently, as the information assumed during the design process changes, the architectural model is redetermined by expressing both the updated form and the new attributes and parameters. I believe that all this can be prefigured today thanks to the new visual programming languages and the sharing of tools that specialize the processes and help to establish multidisciplinary design procedures. I therefore believe that every young designer must now provide knowledge of three types of software: a conceptual modelling software (e.g. Rhinoceros), a visual programming language (e.g. Grasshopper) and a BIM software (e.g. VisualARQ).