Do you think that new technologies are only for modern architecture? Do you think that design software applies only to new projects of engineering or design? Look around and you will find out that what surrounds you was not built yesterday nor, perhaps, this century. We are more than just heirs of the past, we are its inhabitants. In VisualARQ we know well that if you are an architect, engineer or designer, you will have on the table projects to show your ability to innovate. Your creations may continue or break a tradition, but can not forget it. Technology does not forget the past. It revives it. For centuries, the mallet and chisel in the hands of a skilled craftsman were the instruments with which we left an artistic heritage. Industrialization facilitated these processes for its culmination by the human hand. Today, the software design is the starting point of the current work of a craftsman. Rhino is a 3D software that goes beyond the present, it looks to the past and returns us its best version. We are going to show two examples of facades and ornamental restoration. Let’s travel to New York to learn about two very different restoration cases: architectural and artistic. The tour will end in Barcelona to see a contemporary use of traditional elements. 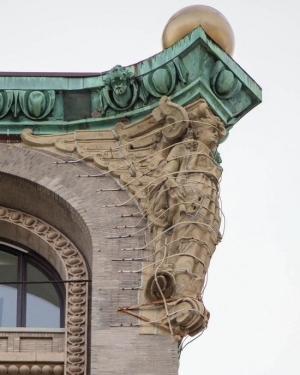 Very close to the city hall stands the building of the American Tract Society, Beaux Arts style, at 150 Nassau Street. It has 23 stories and is currently a residential building. When finished in 1896, it was one of the highest in the city and the first with a steel frame structure. The architect was RH Robertson who had already made official buildings and churches in New York. The building is clad in gray granite and gray but was decorated with four figures of angels in terracotta, work of the Spanish sculptor Fernando Miranda. Granite resisted but the fragility of the terracotta had left badly damaged sculptures. For its restoration, the company Boston Valley Terra Cotta dismantled the most damaged sculpture and performed its photometry. The result was transferred to Rhino to build a 3D model that was divided into sections. The profile of each one of them was reproduced in plywood and covered with clay to obtain a three-dimensional figure that was retouched by hand. Craftsman manual work does not disappear with the technology, it is simply made easier. Negative molds were obtained from this model, which allowed to reproduce the figures of the four angels, each one with a weight of more than 200 kilos and a height of 6 meters. 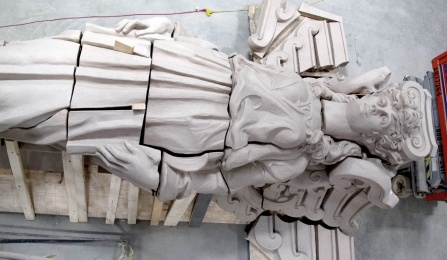 The company highlighted that the computer process facilitated their work, although they had to learn how to use the software. It is important that a 3D modelling software is easy to learn, since the practical and economical benefits multiply, which is the case of VisualARQ. Without leaving New York, let’s see another very interesting architectural example carried out by the same company. It is the restoration of the Corbin Building -assigned to Western Facades- next to the modern Fulton Street Transit Center. Its construction will be completed shortly. 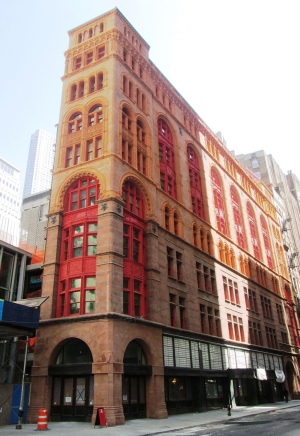 The Corbin Building, designed by the architect Francis Hatch Kimball, was originally built in 1889 to host a bank and some offices. It is now going to be integrated into the Fulton Center complex. It is not a skyscraper, it does not have a steel skeletal frame, but load bearing masonry walls. Although it only has nine plants, when it was finished it was one of the highest buildings in Manhattan. It was one of the first four New York buildings to use the Rafael Guastavino “timbrel vault” and “cohesive construction” architectural systems. Among the materials used in the building design, there were sandstone, brick, unglazed Guastavino tiles and unglazed terracotta, the element being created by Boston Valley Terra Cotta. Rhino 3D modeling is being used also in this case to make new pieces that replicate exactly the damaged original parts (there are more than 2,000 in the building). From a brick construction enduring over a century, we will end our tour with a construction which was built just a few months ago and which no longer exists. A temporary intervention which won the first prize at the Eme3 Festival held in June 2013 in Barcelona. 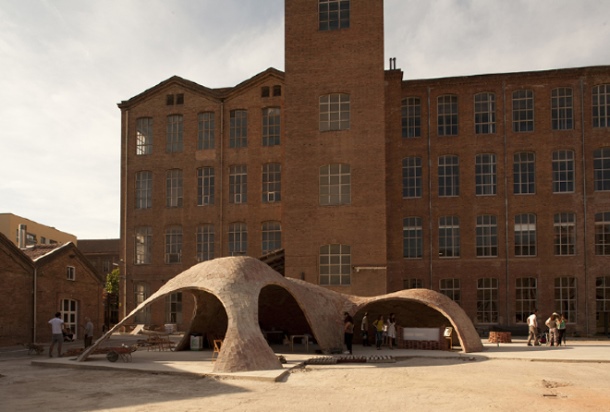 Brick or terracotta: made to last… or not. Fotos: Manuel de Lozar / Laura López

The Pavillion, whose name is Bricktopia, is the work of the MAP13 collective (Architects: Marta Domènech and David López López). It was placed in the courtyard of some industrial buildings, creating a space in the shade, where all kinds of activities could be carried out. The objective was to combine a simple material contemporary design with a Catalan traditional architectural design. In the Catalan vault, plain bricks are placed so that they create low arches made of gentle smooth curves, forming a very stable structural system with a balanced distribution of efforts. Although it was based on a traditional low cost and easy to build design, software tools allowed to go further in constructive complexity and structural optimization. You could easily obtain drawings of such vaults (plans, elevations and sections) with the VisualARQ “Create Section View” and “Create Plan View” commands. Sources: www.bostonvalley.com, // retrofitmagazine.com, www.westernfacades.com, www.eme3.org, //cargocollective.com/madavama (Article by M.A. Núñez)