We at VisualARQ like architecture integrated into nature. Now we take a step forward and get to architecture that emulates how nature works.

A plant is a living being that feeds on sun, water and soil nutrients. A building is a living being that, to be inhabited, requires light, water and materials from the environment. This mimesis reaches the maximum level at the VanDusen Botanical Garden Visitor Centre in Vancouver. It’s not just a matter of form, it’s the full cycle of sustainability. This is the first building in Canada that was designed under the parameters set for obtaining the maximum sustainable building certificate, the LEED Platinum (Leadership in Energy & Environmental Design) and intending to apply for the Living Building Challenge. The Center was made by Perkins + Will studio, which was founded in 1935 in Chicago and today has more than 1,500 employees and 20 offices. In 2011, the studio was commissioned to breathe new life into a botanical garden which had been created in 1975, on the former grounds of a golf club. The work, under the direction of architect Peter Busby, consisted of creating a new visitor center that would not only take administrative, commercial and educational activities, but would also represent the very essence of nature reflected in the garden. If the purpose of a botanical garden is the preservation of the species, the purpose of VanDusen Visitor Center should be to preserve another form of natural wealth: energy. First, we can observe a building whose eastern part is partially surrounded by undulating walls of concrete and rammed earth. In the curved wooden walls, there are several entrances to get inside.

The building is surrounded by undulating walls of rammed earth. Perkins+Will

The inspiration for the formal design was a native orchid whose six petals form the roof. From this flower, a conical structure stands out which plays an important role beyond aesthetics and whose mystery we will discover later. At one point of the roof, one of the petals curve reaches the ground and serves as a gateway for insects and other tiny animals carrying seeds to the top. Thus, nature itself will reconquer its space and will cover the false orchid roof with new flora, as it happens in four of the petals. Fist example of sustainability: the vegetation displaced by the building will take its place again.

The glass oculus emerges from the roof as the pistil of an orchid. Perkins+Will

The fifth petal is hiding the hot water tubes heated by solar energy and the sixth one has a concave shape to collect rainwater. Second example of sustainability: taking advantage of natural sources of energy. 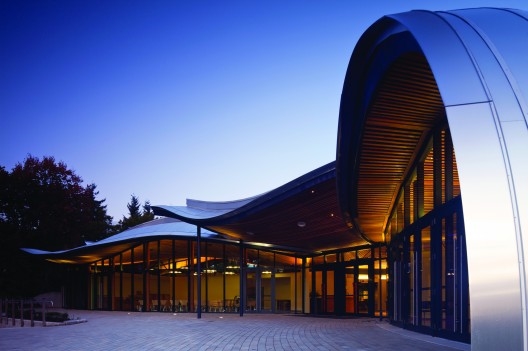 The roof petals are made of aluminium panels. Perkins+Will

The roof petals undulation is achieved with several 4 x 20 m. panels curved about their three axes. The tool used for such a complex design was Rhino. The panels fabrication was then relatively easily done using BIM technology, as we have seen in other cases of organic designs. During the winter, Vancouver’s largest crane placed the prefabricated panels which came with all the electrical and insulation fixtures, sprinklers, etc. To the west, you get the best views of the garden, so an overhang was built for a more comfortable contemplation. 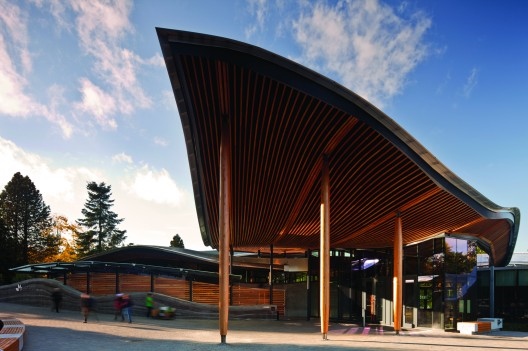 The overhang extends towards the area with the best views of the garden. Perkins+Will

The Living Building Challenge imposes strict requirements, including that resources must be obtained on the spot. This could be difficult in many cities, but it is certainly not the case of the VanDusen Botanical Garden. Behind the beauty of its forms lies the sustainability secret of this ecologically flawless building. It shows that, even if you don’t have a perfect location to take advantage of natural resources, imagination makes it suitable for any place to get it. Vancouver is not exactly known for having plenty of sunlight. Despite this, this completely self-contained building, with net-zero energy and a neutralized carbon footprint, could be built there. 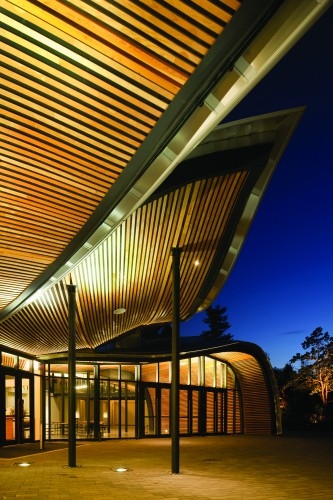 Rhino was the ideal software to model the organic shapes. Perkins+Will

Let’s start with water. One of the petals from the roof collects rainwater which becomes the gray water to be used in the visitor center bathrooms. As for blackwaters, they are taken to a bioreactor in the premises, then they reach a percolation field, and finally end up in the garden basement. Remember the harmonious petal descending from the roof to the ground? Such a poetic image hides the blackwater piping that comes out of the building. Energy is obtained thanks to several systems, such as geothermal boreholes and solar panels. The panels are placed in the parking lot and produce 11,000 kwh, covering a quarter of the building needs. At one end of the roof and in a building next to the visitor center, there are also 400 solar hot water tubes. The sun heats the water that feeds a radiant heating system under the building floor and is also directed to 52 holes at 60 meters deep which are randomly distributed in the surrounding area. As water is maintained at about 20° C, these holes help to heat the area during the winter and to chill it in summer. 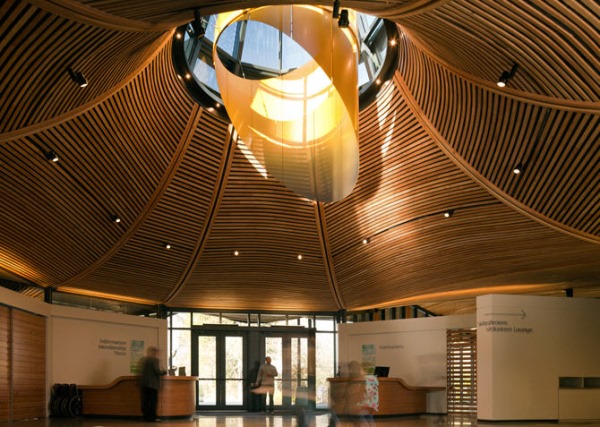 The oculus seen from the atrium of the VanDusen Botanical Garden Visitor Center. Perkins+Will

Thanks to these systems, the building gets more heating than it needs and can afford to exchange the surplus for electricity coming from a neighboring restaurant. Remember that energy on-site production was one of the Living Building Challenge certification requirements that was targeted by this project. And we arrive to the large glass oculus emerging as a large pistil among the roof orchid petals. What we see from the outside is glass, but below there is an aluminium cone that acts as a heat sink. In the upper part, the cone diameter is 3 meters and at the bottom extends up to 4.5 meters, forming a large atrium. It does not have a homogeneous color, we can see orange nuances which also reflects the wood of the interior of the building. The surface is darker at the bottom. What are these shapes and color for? For efficient use of light and solar heat. 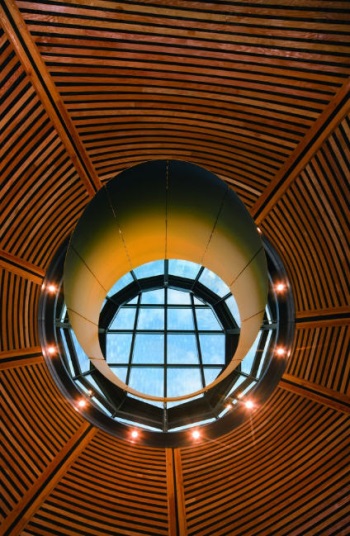 Details of the oculus and wooden covering. Perkins+Will

When the sun’s rays reach the aluminium sink surface, the hot air rises. In this way, the room cools down. That’s why the color is darker at the base, the sun reaches that area just in summer. During this season, windows can be opened for cross ventilation. In addition, to increase the area of action, the aluminium surface has been perforated. When a building design is focused on sustainability, the choice of materials is vitally important. This aspect has required the full involvement of the suppliers who modified their raw materials and processes in order to achieve this objective. Materials which did not fall within the standards of sustainability were replaced throughout the process. Drainage tubes were not made of PVC but of ABS (Acrylonitrile Butadiene Styrene), with thousands of handmade perforations. In the joints, neoprene has been used instead of silicone and similar changes have been made in the entire construction. Wood is the main protagonist in this building. On the roof, we can find FSC certified glulam, which we have seen in other projects. Beside exploiting the area resources, some elements have been reused, as in the case of the garden benches and bridges made from the wood found in the old building. Thanks to this particular use of wood, the project was granted the Wood Innovation Award. Other aspects, such as design or sustainability, allowed this project to be also finalist in high-level awards and to receive prizes as the Engineering Award (by World Architecture News) or the Lieutenant-Governor of British Columbia Merit Award (by the Architectural Institute of British Columbia). These are undoubtedly prestigious awards, but we believe that the best recognition for the VanDusen Botanical Garden is couples wishing to celebrate their wedding there. A false orchid curving its petals harmoniously fits to perfection with the azaleas and peonies which can be usually seen in wedding pictures.

VisualARQ examines the organic shapes of this architectural design in Canada. Perkins+Will