Where luxury is harmony: Casa das Canoas by Oscar Niemeyer

If you love free-form architecture, as it is the case of VisualARQ, you will agree with us that the work of the Brazilian Oscar Niemeyer is a unique landmark. Is there an ideal client for an architect? Public bodies with big budgets? Private customers who want a personal project? Or friends, who believe that the architect can imbue his/her project with their personality? Actually, none of them. The best customer for an architect is the architect himself, with no more limits than those imposed by the budget and legal regulations. When you are your own customer, nothing is banned and you can experiment as you like. Today we will be talking about the most intimate Niemeyer and of one of his projects in which he acted both as an architect and a customer. No doubt his most popular work is the one he executed in Brasilia, the city that was intended to show the world how a country could raise a new capital which would show its power, modernity and future potential. However, for this article, we didn’t choose any of those large buildings that became symbols of the new Brazil, nor any other huge assignment. Instead, we chose to introduce you the house he designed in 1951 for his family: A Casa das Canoas. 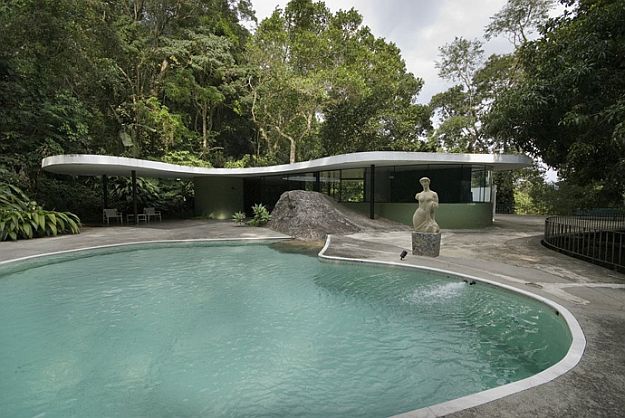 The architectural design of Casa das Canoas has been reproduced with VisualARQ. Image: Design Rulz web.

This was the third house he built for himself. He had earlier made other two, 11 and 4 years before, respectively. Long enough for the author and resident to detect what could be improved. For this building, he not only applied his theories on architecture, but also what he had learned with his previous homes. This building, designed for a family, has become a symbol of the architecture of his time. The design concept, the use of materials such as cement and glass, the use of the land irregularities, the relationship with nature… all these factors combined enhance each other, creating a unique and personal piece. It’s the essence of Niemeyer’s architecture. Born in 1907 and died in 2012, he was a contemporary of another great architect he admired and with whom he is often associated: Le Corbursier. In fact, in Ville Savoie, the French architect shares some basics with Niemeyer – the use of the land, materials, pilotis, the relationship with the environment. However, the results couldn’t be more different. Although they share the same philosophy and several features, the conclusion is so different that one doesn’t know if the eyes of an expert would notice more similarities or discrepancies between these two projects. This is the magic of creation. 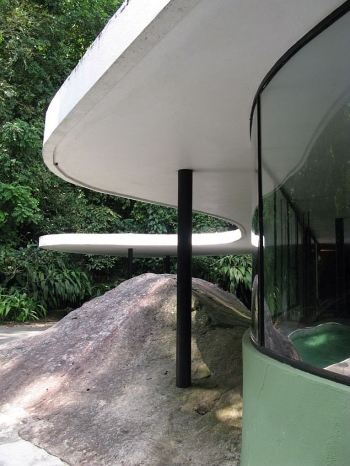 The Casa Das Canoas house is located in the Tijuca Forest, near Rio de Janeiro, and gets integrated with nature in an uncommon way. This integration is far from spontaneous, everything is measured in this design. Niemeyer took into account the terrain layout and its access, in order to achieve a carefully studied perspective for the visitors, granting them a scenery type of view. Considering that the house is located on a slope, we would expect it to be accessed from the bottom side. However, this is not the case and is the first example of Niemeyer breaking with preconceived ideas. A winding road leads to a higher point on the hillside and, while you are entering the premises, you begin to descend. The entrance couldn’t be more discreet – one could easily miss it. The ideal one for a refuge. Before you, the garden, the house, the pool and then the forest extend without any visual barrier. There is nothing accidental in that vision toward which you move as you slightly descend. 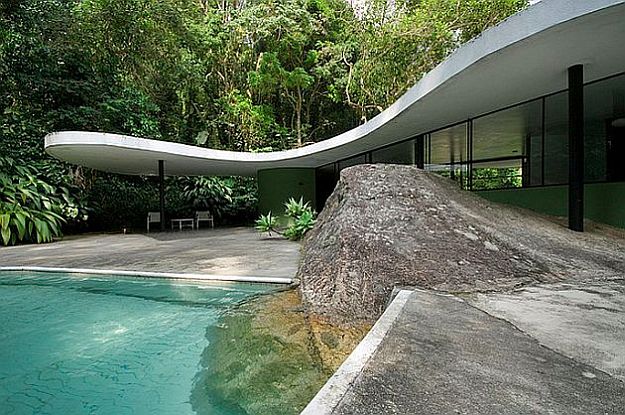 The white winding roof, the pool and the rock are the core of the Casa das Canoas premises. Image: Design Rulz web.

From this position, and being a privileged spectator, it is difficult to tell which of the two elements that give personality to the whole scene first catches your attention. The first one is the house roof projecting beyond it, as a floating porch, a light colour canopy with sinuous shapes. The second one is a rock that makes you ask yourself if it was the axis around which the house was built or, on the contrary, if it came from somewhere else to get embedded against the human construction. It is a shocking and disruptive element but, thanks to the intelligence of Niemeyer’s design, it becomes something harmonious and somewhat brutal, as it brings us back to nature, but without becoming a nuisance. The rock is the false obstacle that stands between the house and the pool. Beyond, the garden extends, in which there are several figurative sculptures by Alfredo Ceschiati. More curves, those of the human body. The second example of Niemeyer breaking with conventions can be found in the house layout. On the main floor, the walls are made of glass. With them, Niemeyer tries to blur the separation with nature. Not only does he let the views be perceived from a window, but he also converts the exterior of the house into a glass wall. “Inside” and “outside” become conventions. Only a fragile glass separates us from the lush vegetation and the magnificent rock. He plays with the concepts of “inside” and “outside”, but also with “straight” and “curved”. The verticality of the walls and the severity of the concrete slab which forms the roof, parallel to the ground, get balanced by the feeling of lightness provided by the fact that the slab rests on slender black pillars. Such linearity gets neutralized by the winding edge of the roof, which stands out even more because of its white color and seems to float. It is a way of saying to nature: “I came, I built, but I can speak your language”. 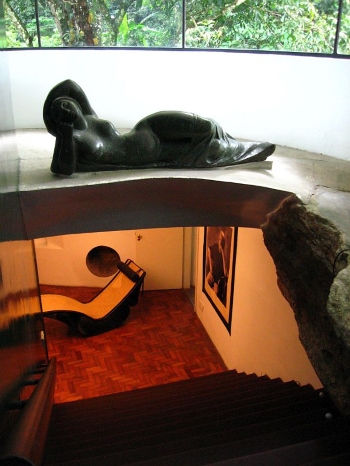 A staircase connects the public area upstairs with the private one downstairs, more intimate and cozy. Image: Laura de Marco

The transparency of the main floor implies that it’s dedicated to the public area. Niemeyer did not want any curtain for that space. From here, open spaces and freedom are evoked. And here he plays again, this time with the concepts of “public/openness” and “private/protection”: the most private spaces of the house are located in a semi-basement. From the main floor, open and without borders, you descend a staircase to a cozy area, with walls and smaller windows, which fits with the idea that we may have of a shelter. In the Casa das Canoas, Oscar Niemeyer gives full prominence to curved lines and free-form shapes. We don’t know what he would have created if he had known Rhino and VisualARQ, but we decided to pay homage to his design by simulating the modelling of his project with these two programs. In the following video, you can watch the virtual model of Casa das Canoas, created with Rhino and VisualARQ. It highlights one of the new features of VisualARQ 1.8: section attributes. https://youtu.be/JHk1vJ1r0wo Giving virtual life to this sample of excellent architecture has been a real pleasure. We specially like that the result of Niemeyer’s work is so seemingly easy, everything seems to fit effortlessly with nature and the building shapes flow lightly. Being able to make something look simple, relaxed and in its natural place is the best compliment an artist can receive, whatever field he/she belongs to. Glass, concrete, vegetation, water and rock. In 1951, few would have believed that the result of the perfect combination of these elements, more than 60 years later, would still be considered as a work to admire and a home to long for. 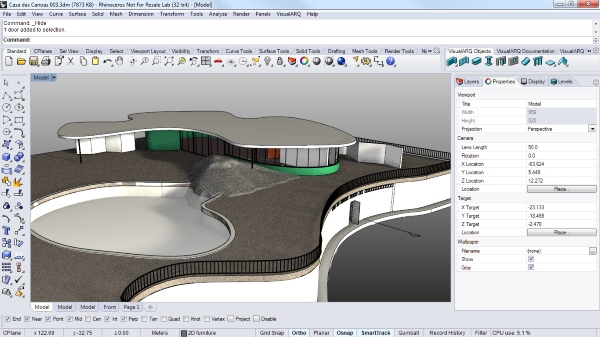 Screenshots of the Casa das Canoas virtual model created in Rhino and VisualARQ. 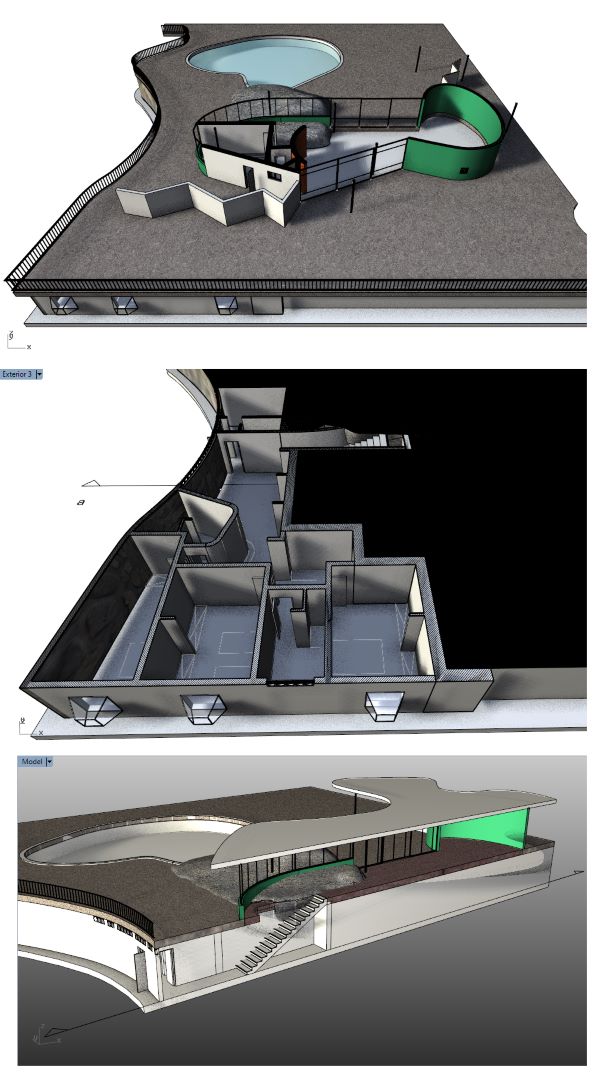