A fairy-tale Rhino architecture for an English country home 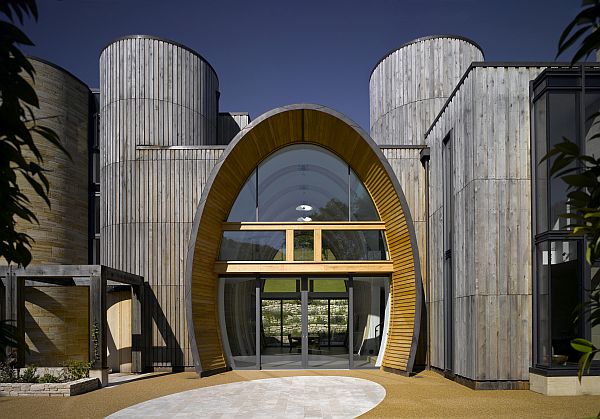 VisualARQ analyzes the use of Rhino software in the unique architecture of an English single-family house designed by BPR Architects: Downley House. When Birds Portchmouth Russum architects discovered that the family that would occupy the house had been involved in the wine bussiness, they decided to articulate the design around a foudre, a big wine barrel. The catenary shape of that building, inspired by the foudre, is surrounded by two towers, like a fairytale castle. The material used in this genuine building is CLT, very similar to glulam. With this work Birds Portchmouth Russum received the annual award to the Most Innovative Project in the Self-Construction category in the UK. The pleasure of drawing. It’s not just a slogan, it is the motivation of our architectural software. So don’t be surprised if the first image you see in this article is not a photo, a render or a sketch done with our software or with Rhino. It is the kind of image that perhaps induced you to devote yourself to the architecture. 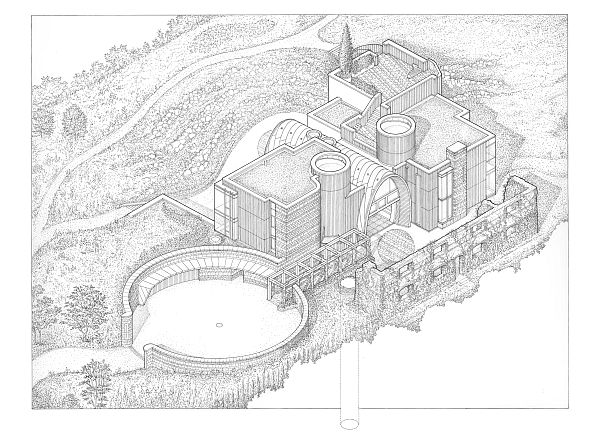 Technology is at your service but, too often, you fully depend on it. Therefore it is important to remember the pleasure of drawing and in VisualARQ we strive to facilitate your work, offering a free-form design to make your imagination be the protagonist. Perhaps this is the reason why we were attracted by the project we are showing you now: the combination of technology and knowledge of the materials in the service of creating an unconventional architectural design. What do you think this building hosts? A company’s office? A civic center? A museum? Does it remind you of a Gaudí catenary? If you enjoy the world of wine and think that this is a wine cellar, you have got a good eye but you are wrong. It’s simpler than that: a private house in the English countryside. Downley House. Does this architectural design seem a little crazy to you for a single-family house? Its story is a bit unusual. 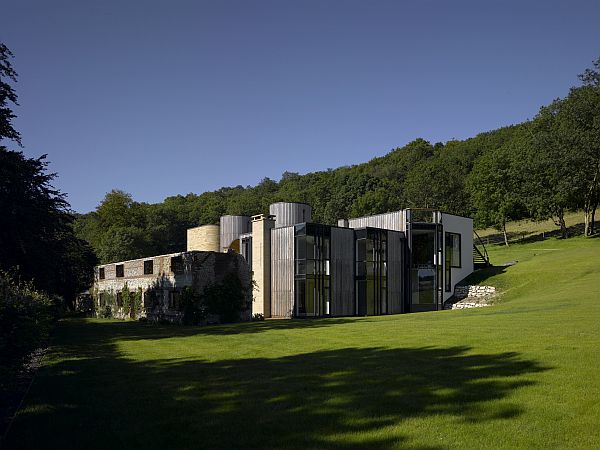 Becky and Chris Taee and their two girls wanted to leave London to move to a quieter place. In the South Downs National Park, they found an estate with the ruins of an old house, which was surrounded by a beautiful landscape. They loved it. Once the property was purchased, they needed to build the house, and the decision Chris Taee (the owner) took was quite uncommon. He asked for half a dozen members from RIBA, Royal institute of British Architects, and contacted them for a small private competition. It was a good start but sometimes good preparations are enhanced by the arrival of the unexpected. A supplier suggested a new name and that studio was incorporated when the process had already begun. The newcomers were those who gained the commission: Birds Portchmouth Russum, the studio founded in 1989 by Andrew Birds, Richard Portchmouth and Michael Russum. This unusual beginning was the germ of an equally uncommon result. What is it that, behind the original architectural element of Downley House, has undoubtedly caught your attention? 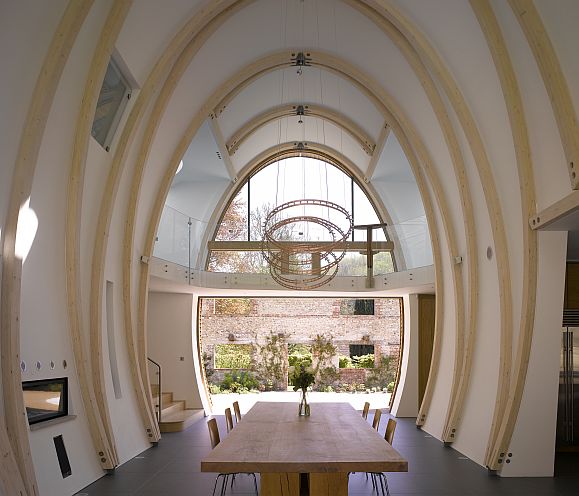 Birds Portchmouth Russum team discovered that, long ago, the Taee family had been involved in the wine business. In that world they found the inspiration for the catenary shape of the foudre, a large wooden barrel with 1,000 liters capacity. 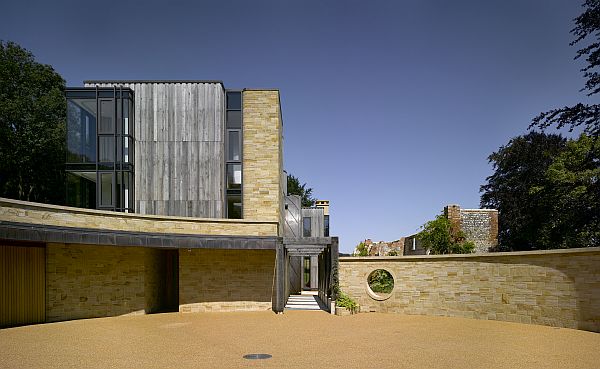 However, before reaching that point, there is an enjoyable way to go. It begins in a circular courtyard with garages around, and continues under the wooden pergola flowing through a garden to reach the entrance. In front of it, there are the ruins of a wall from the old house. A reminder of the history of the place that reinforces the first impression of the house, suitable for a fairytale castle, with two round towers that flank the foudre. 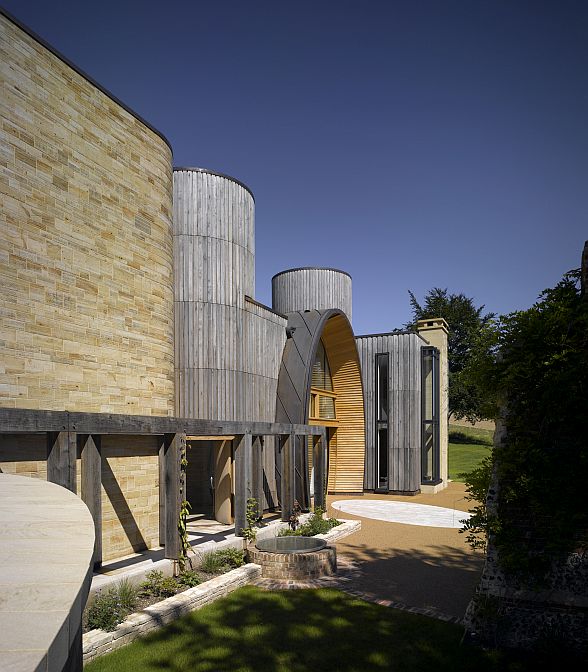 Cylindrical turrets and vault of the project. Image: Nick Kane

However special the house is, the most essential characteristic is the landscape that surrounds it. In addition to the views from the large windows, especially from those forming corners and range from floor to ceiling, there is also a roof garden from which you can also enjoy nature. The material used in the construction may sounds familiar to you from this blog. CLT is very similar to the glulam we have found from South Korea to Canada. But there are differences between CLT and glulam in their manufacturing processes and their uses. These glued laminated wood lamellas, eco-certified, have been used on walls and floors and its coverage in wood or stone has been chosen depending on each area of ​​the house. 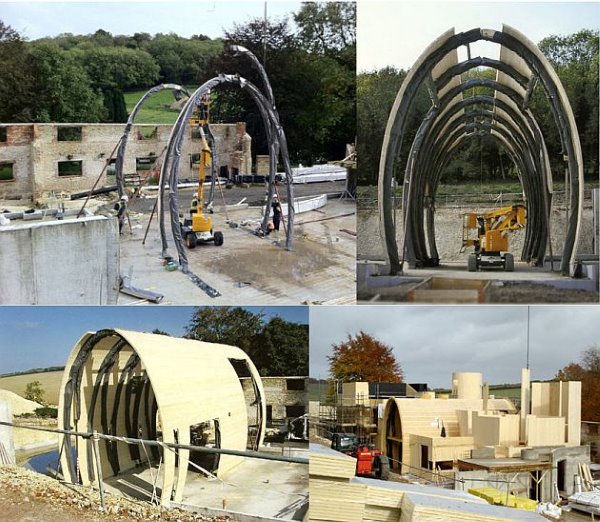 In the foudre, the CLT panels have been placed on ribs, the insulating material has been placed between the panels and the copper roof. Indeed, insulation deserves a comment. In addition to the barrier measures, mechanical ventilation systems and an underground heat pump were installed. This is enough to cover the heating needs of the 650 m2 house. This exceptional project for its concept and execution was developed by Birds Portchmouth Russum using Rhino software. When it comes to organic forms, modeling and parametric design, Rhino is the choice to consider. But the architectural software is just a tool, talent belongs to the creator and is also expressed in the hand-drawn colored drawings we have shown.

Spaces sequence, from the circular arrival courtyard through the house into the landscape. Image: Birds Portchmouth Russum

Spaces sequence, from the circular arrival courtyard through the house into the landscape. Image: Birds Portchmouth Russum

What else can you find in Downley House? A successful layout. Creativity in design and materials. Interest in sustainability and energy saving. Wide spaces, brightness. 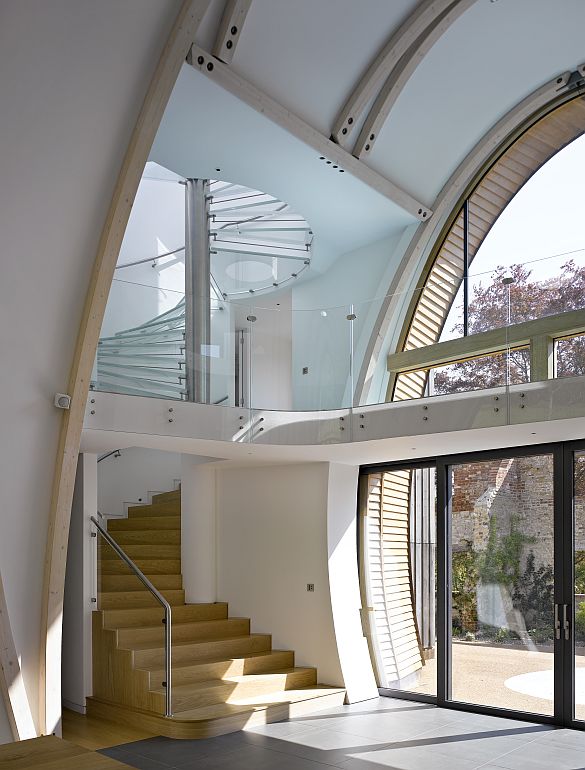 In the North Tower, a circular stair leads to the foudre bridge link and up to North roof terrace. Image: Nick Kane

The striking foudre becomes the central element of the building, not only for its visual interest but because it is actually the common space between the two wings of the house. One is dedicated to the residence of the family, the other is reserved to the guests, equipment and installations for heating and cooling. With this separation between the residence area and the guest zone, don’t you have all the benefits of receiving visits without the drawbacks? 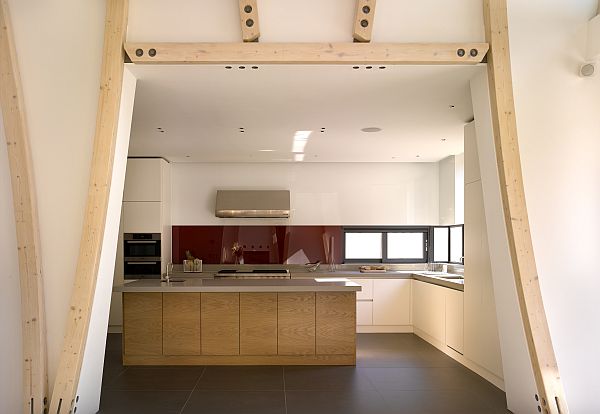 The kitchen can be seen through the foudre wall. Image: Nick Kane

The foudre space is occupied by a large dining room. The doors at the ends lead to courtyards. Another opening in the wall allows you to glimpse the kitchen. In this social meeting area there are three staircases. The two at the sides, partially in glass, are integrated into the round towers we saw from the outside and lead to the rooms upstairs. A third staircase leads to the roof garden. 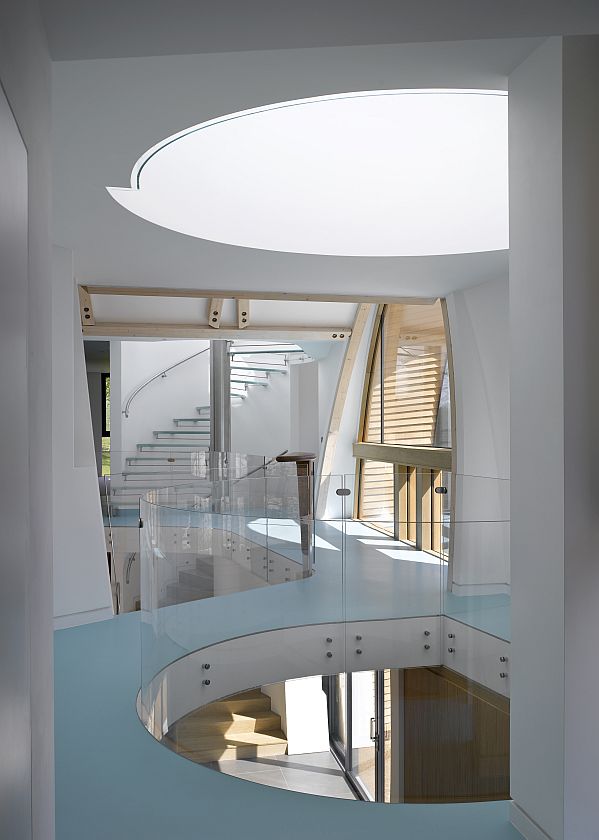 This work by Birds Portchmouth Russum received the annual award to the Most Innovative Project in the category of self-construction in the UK. The award is also for the nearby school, located in the national park, which can visit Downley House every year and see the practical use of technology applied to environmental protection and energy saving. And, undoubtedly, who gets the daily prize is the family itself, who devised a concept of home and found professionals who knew how to translate their dream into architecture. 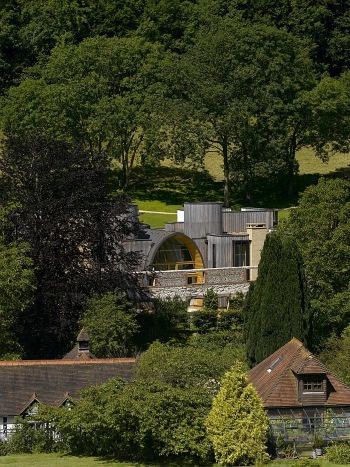 The ruin wall incorporated in the new house appears in foreground. A medieval or fairy-tale effect. Image: Nick Kane