In architecture, small can be very big

When we at VisualARQ choose an architectural project, we usually opt for the most complex in terms of size, originality, materials or use. It is simple and convenient, since we want to present the wide range of options that Rhino offers –as well as our software- and high caliber constructions are ideal for this. However, not only the large architecture firms use VisualARQ, or Rhino in general. The vast majority of architects work in very different conditions. Without huge budgets or possibilities of international publicity. Even without those incentives, they must perform works that demonstrate their technical expertise and their creativity talents. They must satisfy the customer, meet deadlines and stay within the budget. And be excellent in their execution. 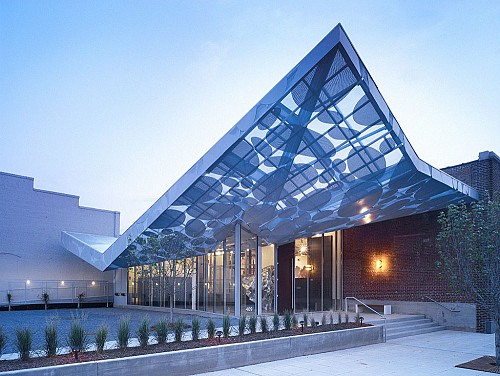 A well-designed building does not lead us to reflect on how right its details are. No questions arise about a building that is really well designed, because we perceive it as natural – the choices that were made were the right ones, you can’t think of others. This is the reason why here there is also place for projects that, despite not being big and wide-ranging projects, are examples of good architecture. Because excellence goes beyond size. The architecture of surgical precision. The work we are presenting has received several awards. For the design, the AIA Design Awards. For the task in conservation and rehabilitation, the AIA North Carolina Tower Awards and the Carraway Honor Award of Merit of North Carolina. For the contribution to the character of the city, the Sir Walter Raleigh Warter Award for Community Appearance. And, finally, the AIA-Los Angeles Merit Award, the AIA-South Atlantic Region Merit Award, the AIA-North Carolina Merit Award and the Downtown Raleigh Alliance Imprint Award. 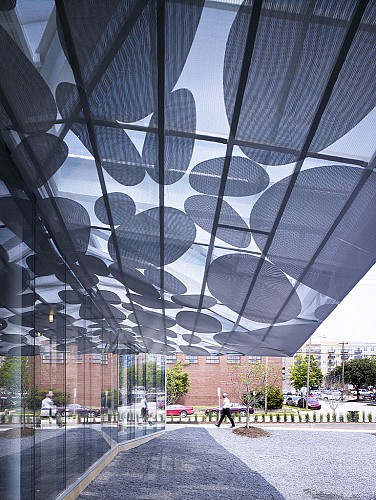 A contemporary vision of the traditional Southern porches. Vía Brooks+Scarpa

Today we are travelling to the United States, stopping in Raleigh, the state capital of North Carolina. It has about 423.000 inhabitants and many projects to boost their economic and cultural life. The city already had cultural facilities and museums but decided to dedicate a space to contemporary art. A small-scale project whose intention was not to collect works, but to show them in order to complete the artistic offer. In downtown Raleigh is the Depot District, an area with some old wharehouses that occupy four blocks, a historical site to preserve and revitalize, so that it becomes an area of vivid interest with new business. For these reasons, it was chosen to locate the new small museum of contemporary art. The chosen building was a two-story red brick warehouse, originally built in 1910 with a single floor. Around 1925, it was extended with another floor above. Since then, it had been used by different companies, remaining in use until practically today. The surface of about 2.000 m2, the location and the outside were adequate, but the building contained a poisonous ingredient: asbestos. The design by Brooks + Scarpa, in collaboration with the local firm Clearscapes as Architects of Record, has provided the rehabilitation of a building and, therefore, of an urban area. They have preserved the historical memory of the place and have made it useful for the community. 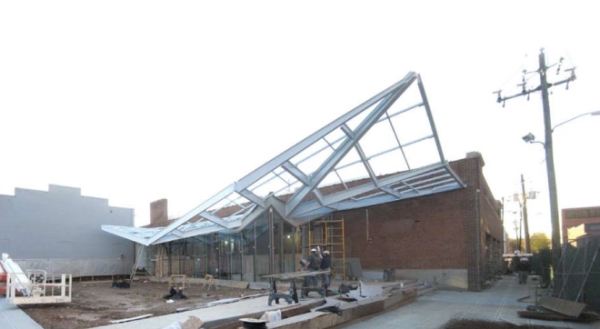 Their task included two aspects: the rehabilitation of the original building and the addition of an entrance area protected by a modern porch. The first step was to strip the building of additions and clean-up and empty its interior space. Thus the original brick and metal were left in sight and restored where necessary. The structure met the common traits in a warehouse: loading docks, high ceilings, a freight elevator (which can still be seen from the stairs to the museum) and even a railroad spur that reached the still operating nearby station. Raleigh was an important point on the railroad transportation network from mid XIX century until the 1950’s decade. 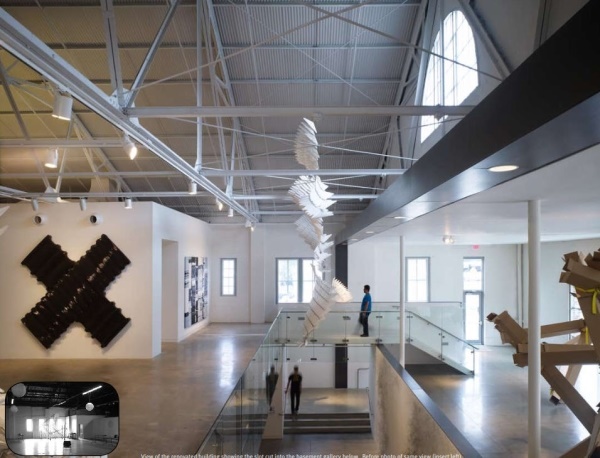 Interior view of the Raleigh museum

The high ceilings that had been so necessary in the former warehouse now provide an excellent environment for public use. The open space allows us to contemplate the metal trusses and vents that are now used for heating and air conditioning systems, as well as a semicircle-shaped window at the top. 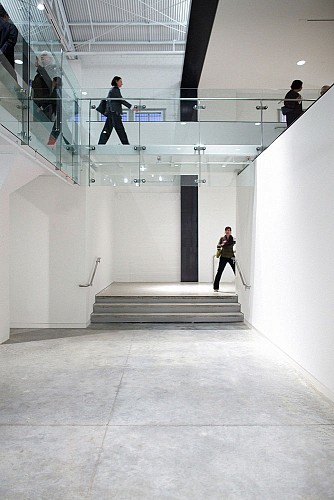 A steel bridge and a ramp facilitate access to all areas . Vía Brooks+Scarpa

On the top floor, which is accessed from the street, they have created two exhibition areas. The main hall can accomodate almost 500 people and events can be carried out in it. To visually unify the whole space, the Brooks+Scarpa team cut an opening in the thick soil separating the original floor from the one which was added later. In this way, both areas get integrated in a single space and you can see the square brick pillars downstairs, where the auxiliary and storage areas are, as well as the offices, separated by low walls to maintain the space as much open as possible. The rest is occupied by a small exhibition area reserved for digital art. Physically, both levels are connected by a metal bridge, stairs and an elevator that occupies the location of the original one. 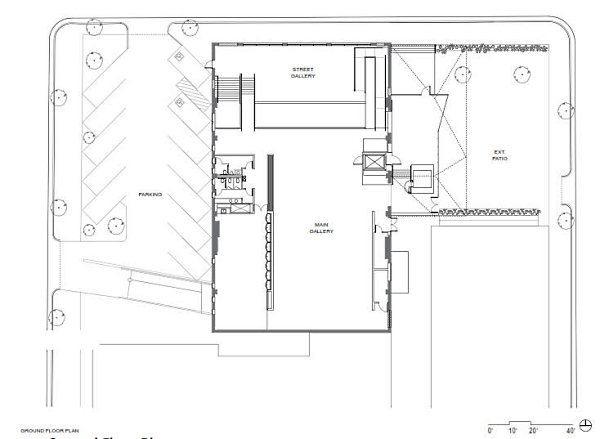 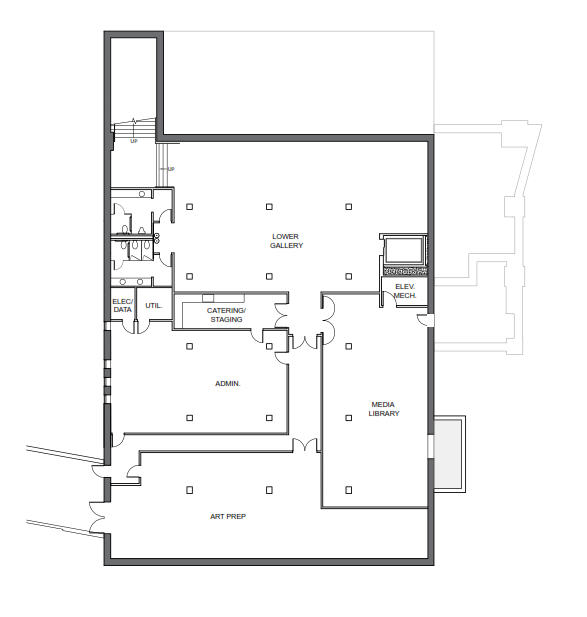 A glazed hall of 84 m2 was added, covered by an extension of the outside porch. This porch is the element that stands out most when contemplating the building. The fact that it extends inside unifies the whole structure and provides fluidity and continuity between the past and the present.

VisualARQ presents the cover, for whose design Rhino software was used. Vía Brooks+Scarpa

With its original design, the porch is itself a sculpture, like the ones to which it gives shade in the outer garden. The interior part of traditional Southern porches is usually painted light blue; as a wink from a contemporary perspective, so are the steal beams of this porch. Similarities end here, since the new porch consists of folds that create different perspectives to passers-by and remind of an origami. The cover with petals design completes the effect. Rhino features allow complex designs to be carried out accurately. 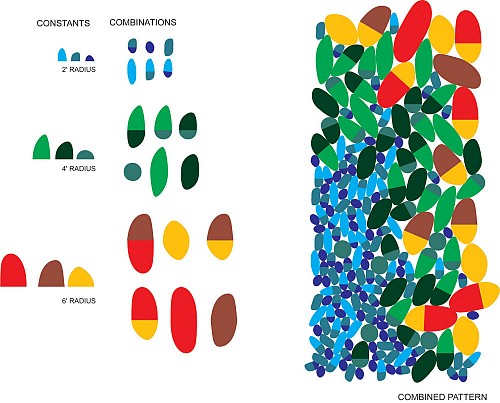 From three petals of different sizes many different variations were obtained. Vía Brooks+Scarpa

The cover of the porch is decorated with perforations that let light inside in some points. They have been placed following the design of imaginary petals of different sizes which have been distributed in a way so as they provide more shade in the areas that require it. The cover material is polycarbonate, which combines with a network to prevent birds from using it. 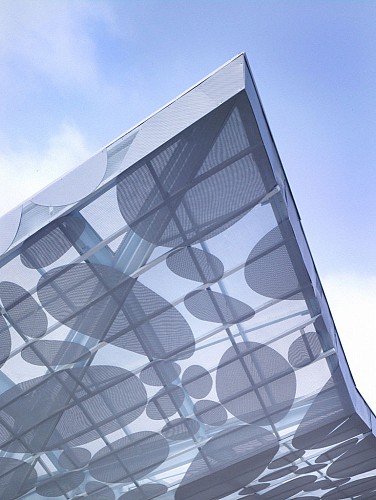 The porch perforations are covered with a net to prevent birds roosting. Vía Brooks+Scarpa

The Brooks + Scarpa studio – now based in Los Angeles – had had an office in Charlotte, so it already had had direct contact with the spirit of North Carolina, and has proven to be able to take advantage of the best of the architecture that still remains in the state. In its work, the confrontation between the solidity of the bricks and the lightness of the porch folds is settled with a victory for both. Together they define the personality of a building that, more than a century after its construction, begins a new stage. With its originality and design, this modern porch is an excellent example of contemporary beauty, attracting visitors into the museum so as they can confront themselves, fearlessly, with the contemplation of contemporary art. (Article by M.A. Núñez)