Since its first release in 1998, Rhinoceros®, or Rhino®, has become one of the standard 3D modeling tools for designers and architects.

Start with a sketch, drawing, physical model, scan data, or only an idea—Rhino provides the tools to accurately model and document your designs ready for rendering, animation, drafting, engineering, analysis, and manufacturing or construction.

Rhino can create, edit, analyze, document, render, animate, and translate NURBS curves, surfaces, and solids with no limits on complexity, degree, or size. Rhino also supports polygon meshes and point clouds. Its accuracy and flexibility makes it possible to students to explore and build their ideas without having to spend much time learning “CAD”.

Also, any geometry created in Rhino can be exported to laser cutters, milling machines or 3D printers, and this is really what makes Rhino different from general 3D modelling tools based in polygons, where you can create great images, but without manufacturing precision.

With more than 300,000 commercial users and more than 10,000 schools, Rhinoceros allows to quickly develop your designs and accurately communicate them to everyone in the product research, development, marketing, and manufacturing or construction process.

A free Evaluation version can be downloaded at www.rhino3d.com/eval.htm

It uses the same workflow, and all the Rhino tools and commands to work with 2D and 3D objects can be combined with the VisualARQ objects. 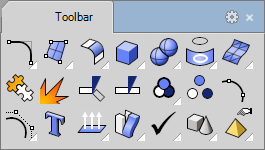