Mestia Airport: architecture and creation of an identity

VisualARQ features a Rhino architecture, a design by J. Meyer H that creates the identity of a city: Queen Tamar Airport in Mestia (Georgia). Despite of its size, the airport fulfils the UE requirements and includes 1,200m long take-off and landing tracks, a control tower, a check-in area and a boarding lounge for 25 people. The building measures 250 m² and it was completed in 3 months. A sophisticated black and white design for a unique airport. You, busy architects who travel around the world: next time you hang around an airport, one of the most evident non-places for anonymity of our civilization, look carefully around you. We at VisualARQ wonder if you’ll find much difference between your departure airport and your arrival one. And, if you are unlucky to have to stop at a transit airport, are all these airports similar? While “Please proceed to gate…” messages are echoing and you walk dragging your suitcase, try to recall which airport you found substantially different when you first got into it. Windows, check-in counters, cafes, newsstands, shops, boarding lounges and corridors, especially corridors. The anonymity of the architecture adds to the anonymity of the visitors, since airports are becoming more and more similar to each other.

A futuristic airport, worthy of a science fiction movie set on another planet

Now look at this image. It is not a spacecraft that has landed on another planet. It is not an element of a set created for a science fiction movie. It’s an airport. A real one. Under all the requirements of European standards. Architects with tight deadlines, take note: it was designed and built in only three months. VisualARQ presents you the Queen Tamar Airport. If this building looks unusual, the site in which it was built is no less so. The airport is located in the town of Mestia (Georgia), whose region was declared a World Heritage Site by UnescO. This town is located in the Caucasus Mountains and has two attractions. One of them is the surrounding nature, where you can do sports such as mountaineering and, particularly, skiing at 1,400m altitude. 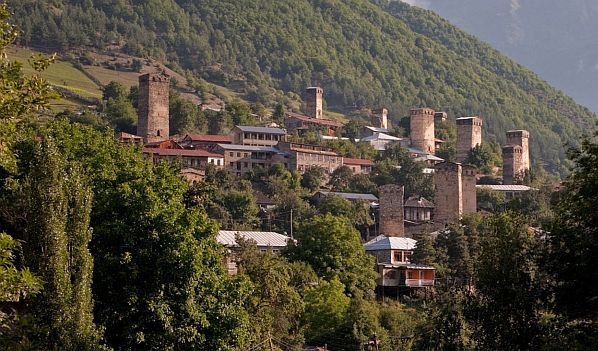 The other source of attraction is cultural, i.e. its medieval heritage, with its characteristic stone towers that inspired the design of the German architectural studio J. Mayer H. This airport does not aim at hosting millions of travellers. The district population is around 15,000 inhabitants and, despite being a skiing site, the inflow of tourists is still moderate. In the first stage, it was estimated that the airport would offer 2 weekly flights made by small aircrafts. This infrastructure aims at energizing the area, thrusting it into the spotlight and facilitating the access for mountain lovers.

Despite its small size, the building has everything an airport needs.

In fact, what does an airport need? Take-off and landing tracks: here they occupy 1,200 meters. A control tower: it has one, it occupies the highest vertical side. A check-in area: it has it, how could one travel without it? 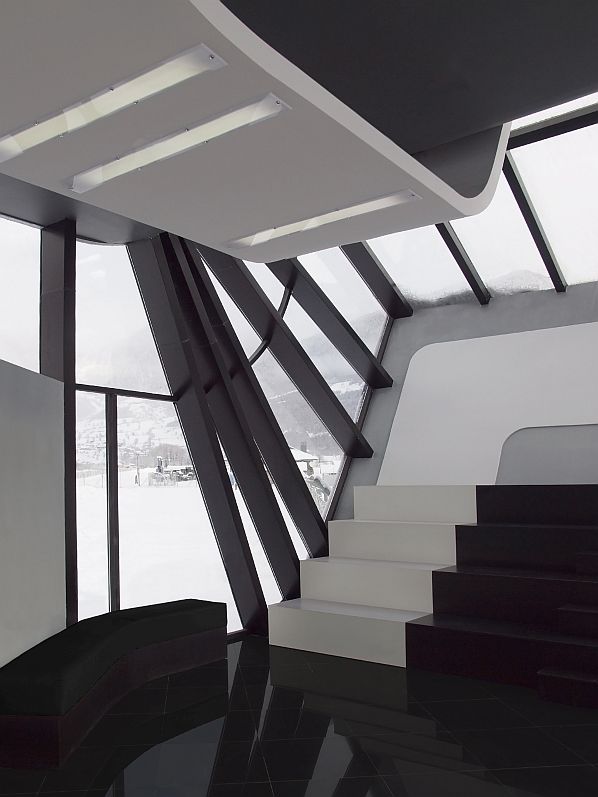 Space saving in the arrangement of the boarding lounge seats

A boarding lounge: no problem, it is located in the lower vertical side, with room for 25 people. The arrangement is in the form of an amphitheater, the prolongation of walls and floors form the stands. Cafeteria: there is also one, next to the lounge. The building occupies a total area of 250 m², it doesn’t need more. If in the future a greater capacity is needed, a new module could be added nearby. 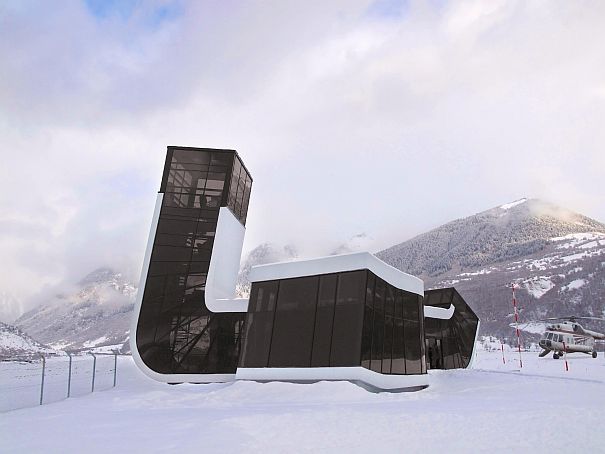 Corridors, endless in length and number, are usually the nightmare of airports’ passengers. The architectural design by J. Mayer H. studio took one of those corridors, folded it over itself and turned what was a “part” in a “whole”.

Elevation plan of the design by J. Mayer H. Architects

The functionality of the services goes hand in hand with the materials. The structure has a tube shape, a corridor made ​​of concrete that seems to be wanting to raise to heaven. Simplicity is also in the choice of two unique colours: black and white. The coating is mounted on metal supports and it is made of dark glass to soften the brightness and glare coming from the snow. Black shows up on the ground and in some decorative details of the interior, contrasting with the white walls and ceiling. 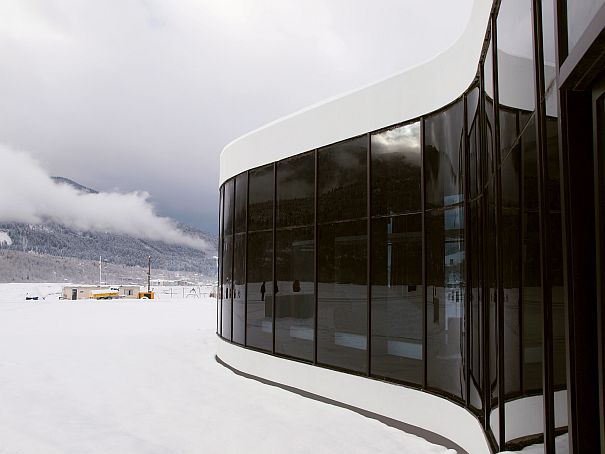 The floor plan has a “Y” shape, in whose branches the airport activities take place. Inside, the ribs structure can be seen throughout the building. 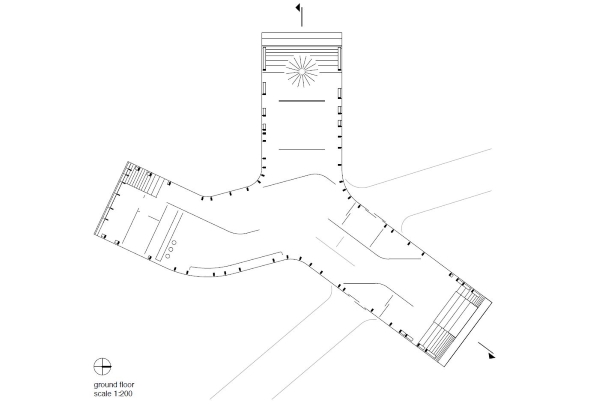 Although the configuration is tubular, the shapes are rounded and organic. By choosing the architecture for an aviation facility, the solution wasn’t to opt for a streamlined representation but for an image of movement and fluidity. Nothing to do with the stereotype of conventional airports. Considering the location, we can see a double reference: the first one to the stone towers of the city, and the second one to the ski jumping ramps at high mountain resorts. At VisualARQ we highlight the fluidity achieved by J. Mayer H. in this project with Rhino, an excellent software to work with complex surfaces, to explore shapes at any stage of an architectural design and to get 3D models. 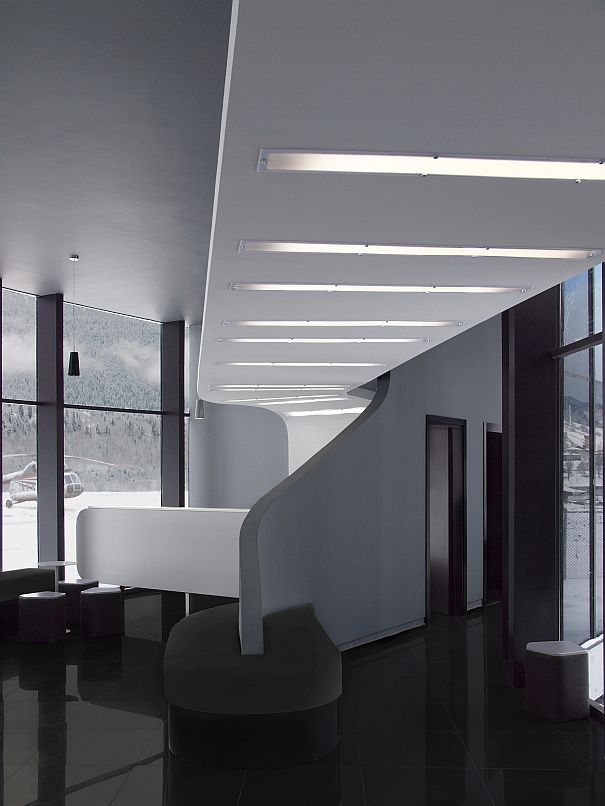 Considering the volume of traffic, this is an insignificant airport. If we change our perspective and appreciate what this architectural design represents for the city and the country in which it is located, we understand that its success lies in creating an identity. It is unique and different, there is no doubt that it is the “Mestia Airport”, it is easily distinguishable as such. In the same way that folding designs characterize the work of J. Mayer H., this project gives an identity to a city and its future plans. And remember, it was designed and built in three months. Every contractor’s dream and, for once, also every architect’s dream. Not to mention the relief of knowing that you are always in the right terminal and facing the right boarding gate. That’s why Queen Tamar is more than an airport. It is the symbol of a city’s future. Whatever your journey is, we hope you make a stopover with us. 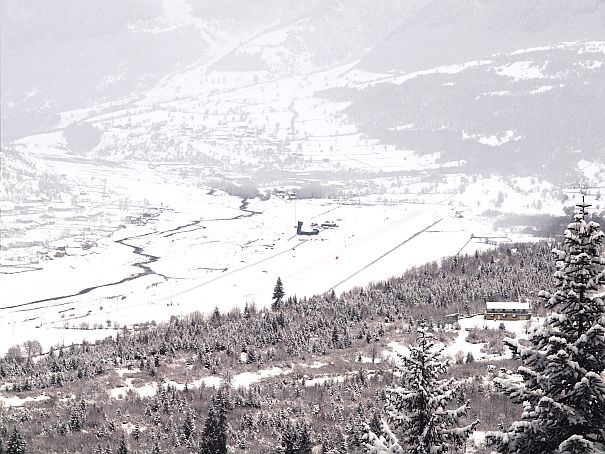 Mestia was declared a World Heritage Site by UNESCO