I can’t see VisualARQ object styles libraries. Why? How can I load them?

When you are working on a document that doesn’t contain any VisualARQ object library, it means that the document was created from a template which was not a VisualARQ template, and the default library of VisualARQ object styles wasn’t loaded. There are two options to get the styles:

Those are located in the same folder as the Rhino templates. Just create a new file by going to File > New… or by running the command _New and the Open Template Files dialog with the templates folder will appear. In case you cannot see the templates folder, from the same dialog browse to the folder manually by introducing the following path in the address bar: %APPDATA%\McNeel\Rhinoceros\6.0\Localization\ Then select the geographical area folder that corresponds to your VisualARQ installation language (for example en-US for English), and you will find the VisualARQ templates in the Template Files folder.

Important Don’t open the template files from outside the Open Template File dialog, they are not regular Rhino files and it won’t work. Template files are meant to be used from the New command. 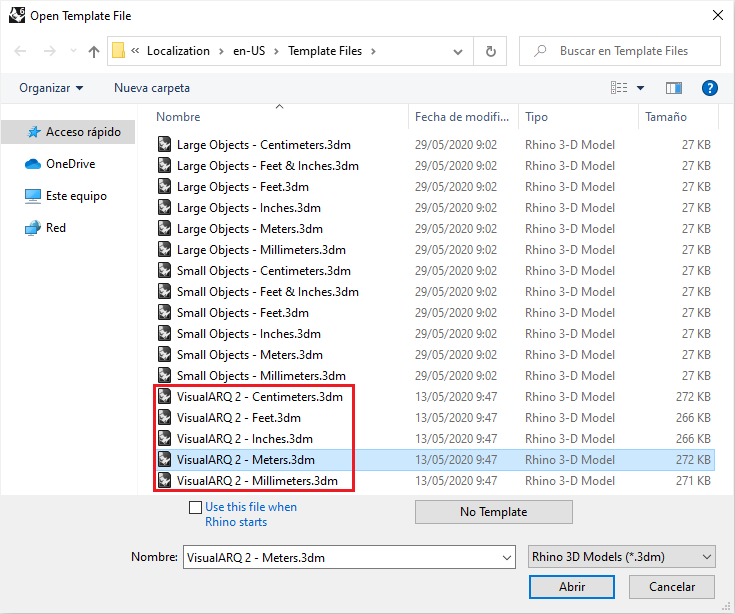 A .val file is a container for VisualARQ styles, it can contain not only one but several of them. For example you can create a .val file with all the VisualARQ styles libraries and import them when needed. To do so follow the steps below:

Note The .val files that contain the object styles library that come with VisualARQ templates can be found at the following folder (in English):