VisualARQ understands what’s behind an architect: a creator and a technician. Not just someone who imagines and sketches, but also someone who listens to human needs to offer solutions and masters the technique that will make them possible. Someone who deciphers a code and makes it his own. Architects want to leave their mark on their commissioned works, put a personal stamp on the projects undertaken. They often don’t build in desolate wastelands but in urban plots where their work should be integrated and, over time, become another link in the chain of buildings. Besides, they must meet the needs of the inhabitants of the environment, whether they will be users of the new property or not. They must find ways to reconcile their creativity with the personality of the place. Each one of us reads the reality surrounding us in a different way, but we have common codes. Those inherited from the past are part of our cultural heritage, but the new codes that arise in the present must reconcile their originality with the fact of being recognizable, otherwise they won’t become part of our language. Sometimes, contemporary architecture is blamed to be narcissist because it raises groundbreaking buildings that overwhelm the surroundings – impressive large moles of cement, steel or glass speaking a different language than that of the city. However, we also find evidences that architecture can start a modern discourse reinterpreting ancient languages and create a building with its own style that finds its place in the urban fabric. The National Library of Public Information in Taichung (Taiwan) is a good example of the above said and, besides, it responds to social and individual needs. 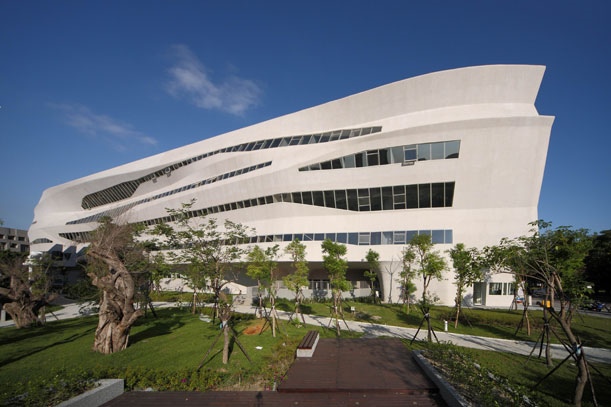 The city National Library dated back to 1923. It was time to build a new one that would go beyond the traditional role. Today, knowledge is not only in books but also in digital format and libraries should respond to new ways of accessing to them. What characterizes the 2.0 world? The fact that information is not in self-contained boxes but it is shared and flows in all directions. Fluidity became the shared language upon which to develop the National Library of Public Information project and a recurring element in its preparation. Knowledge fluidity. Fluidity in the user access and in the environment. Fluidity is closely related to one of the characteristics of the city of Taichung since its creation in the XVIII century: irrigation waterways. The flow of water from those ancient canals finds its counterpart in the building, both in its design and its functionality, and provides its fundamental features: fluidity, interconnection and spatial movement. New interpretations for the former city codes. These concepts were developed by playing with two geometrical objects: the Möbius band and the Klein bottle. The inside and the outside seem to have no boundaries. So is the building – inside and outside – and its relationship with the environment.

J. J. Pan & Partners studio had an area of 2.16 hectares at its disposal for the project. In it, they erected a building of 42,000 m2, with five floors of 6,600 m2 each and two basements. At first glance, we can see a building in L-shape whose arms include a central patio. The whole building is surrounded by gardens, with different accesses from them. They are not placed in a uniform way, its gentle slopes appear as a product of chance and create specific spaces for different uses. The grassy area is intended as an invitation to read on the outside of the library, while the paved square and the flowerbeds create pathways to the building. The building does not interrupt the garden, but rather fits its L-shape within it. 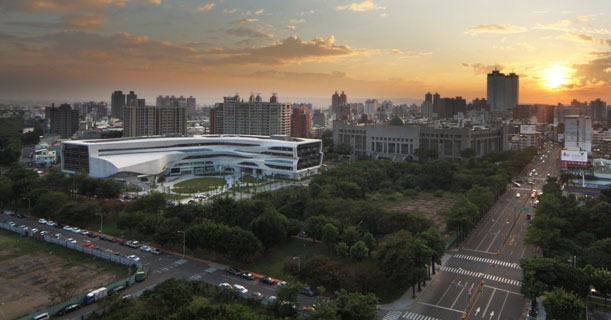 The chosen plants are native of Taiwan and also grow on the roof to create a microclimate in the heart of this densely populated island. The inclined columns, with organic shapes, support a zigzagging curtain wall which in turn supports the folds of the facade. This design is not just for aesthetic reasons, it is also a key factor for the entrance of natural light, which reaches the reading areas in many different ways, as we will see later. It is light, and the way it reaches the inside of the building, which models the undulation of the facade. In addition, in the façade folds, architects see an evocation of the ripples of the water which used to run through the canals of Taichung. 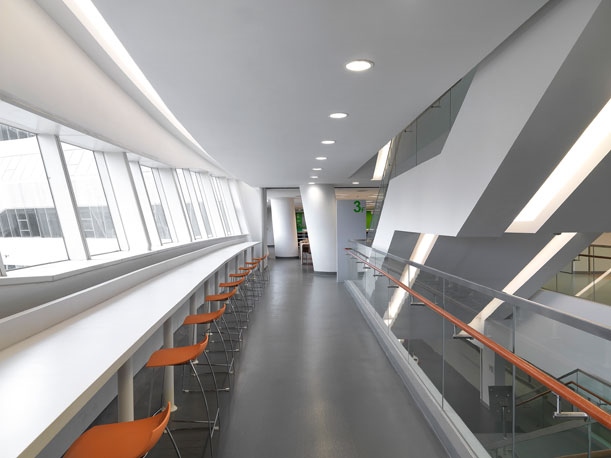 The exterior finish is made with composite panels with EPS insulation and cladded with white round mosaic tiles of eight different sizes, reminiscent of river stones. The program used to create the design was Rhino, a very suitable program to perform the many tests and models required in this kind of projects. The importance of fluidity and interconnection can also be perceived in the arrangement of the building windows, which reflect the outside traffic and the surrounding area. However, there is an even better example. 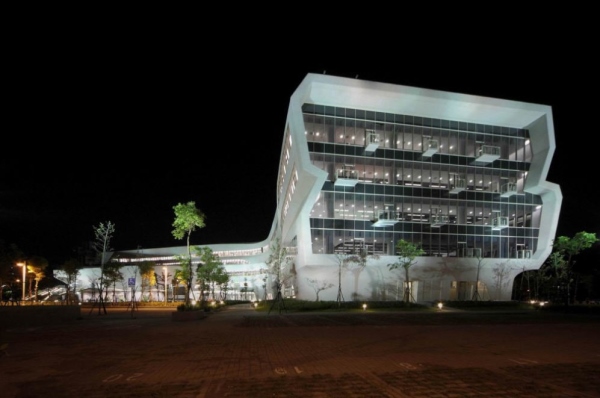 We are talking about the inside, which deserves special attention, since the five floors of the building have been carefully studied and provided with a distinct personality. As you go up in height, the outside view obviously changes. Again, in order to give an idea of flow and exchange, a design was created in which the inside and the outside are related to each other.

As you get into the building, each floor follows a different theme: people strolling, the tree trunks, the canopy formed by the tops of the trees, the city skyline and the clouds. This creates a continuity between the inside and the outside that makes you forget that you are inside a building. Shapes and colors play in your favor. The reception is located on the first floor. Its predominant color is orange, which represents the energy of the crowd and coexists with the children’s area, set as an animated forest. 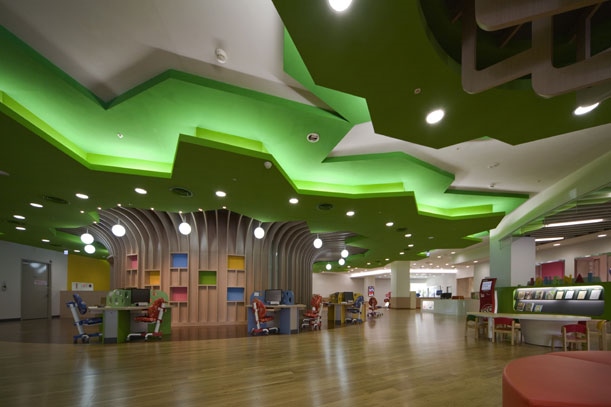 On the second floor, the wooden arches and lightweight pillars remind of the tree trunks. Going up to the third floor, we find that the top of the trees have been turned into shelves. In the fourth floor, we can see high shelves with lighting frames evoking the city lights. Finally, the top floor theme is the sky: furniture is white and curved, reminding us of clouds, and the light comes in through round skylights overhead. Light gets inside through windows and skylights. Image: J. J. Pan & Partners

The flow of water through the channels has an analogy with the light ribbons of the ceiling, guiding our way through the library. Electrical and computer conduits are hidden behind them. The curvy facade is the reason why windows have different heights and inclinations. Light is always an essential element, but in a reading center it plays a special part. It reaches the inside of the building in many different ways, through the windows and the roof, and allows both the visitors who are by the windows and the ones who are far from them to have adequate lighting. The wide windows allow every change of light and color on the outside to be reflected inside. The chosen studio to carry out the whole project was JJ Pan & Partners studio, whose headquarters are in Taiwan. It was founded in 1981 by Joshua Jih Pan and currently has over 200 members. It has offices in Taipei, Shanghai, Tianjin and Xiamen.

With their work in the National Library of Public Information, they have proved that the library is not only “of Taichung” for its location, but also because of the identity that its design conveys. It flows within the gardens as water flows through the canals of the city. 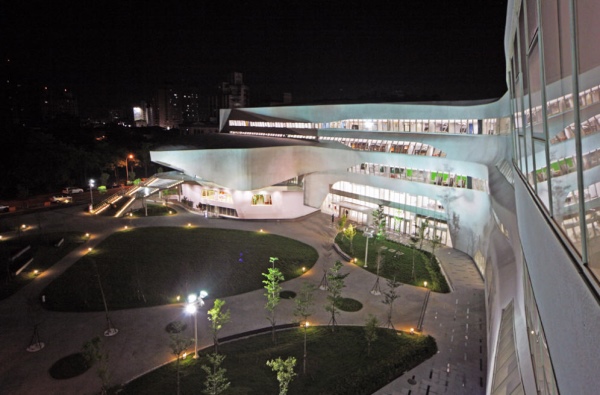 Rhino software has been used in the design of the National Library of Taichung. Image: J. J. Pan & Partners