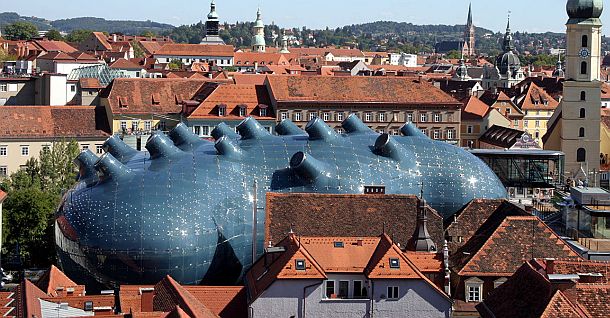 VisualARQ presents an extravagant building for contemporary art, the Kunsthaus museum that seems to float above Graz (Austria).  In this Rhino project, Crab Studio has developed an innovative architectural design and a creative use of materials. The biomorphic building is covered by almost 1.300 blue translucent Plexiglas panels. The main façade contains a BIX installation, by Realities United, that allows to project videos and messages, acting as another exhibit space. This remarkable building is physically linked to the one the most important old buildings of the city with a “needle”, a bridge and viewpoint, which connects traditional and contemporary architecture. From VisualARQ we contemplate how, sometimes, institutions take surprising decisions and that makes them controversial. When such decisions affect the architecture of the city, discrepancies remain in time or are assimilated positively. An example would be the famous Guggenheim Effect or Bilbao Effect. A disruptive iconic building imprints its character and distinguishes itself from the environment. From the surprise to the vindication thanks to its effects on the city. Something similar happens with the Museum that we present today. It is located in Graz, Austria, world’s cultural heritage, with a rich architecture. After its designation as ‘European Capital of Culture, the city launched a competition to build a contemporary art center. The winner option cannot leave you indifferent: Kunsthaus, designed by CRAB (Cook Robotham Architectural Bureau)

It is no wonder that residents call it the “friendly alien”. A blue cloud seems to float above the red roofs of the old houses of Graz. It could also be a marine animal with suckers or a caterpillar but, in any case, has created a tension between traditional and modern architecture. This tension has been positive in terms of number of visitors and the renewal of the Muvorstadt district where it is located. If it is amazing during the day, at night it is even more because the lights of its coating also become pixels of a giant projection screen. 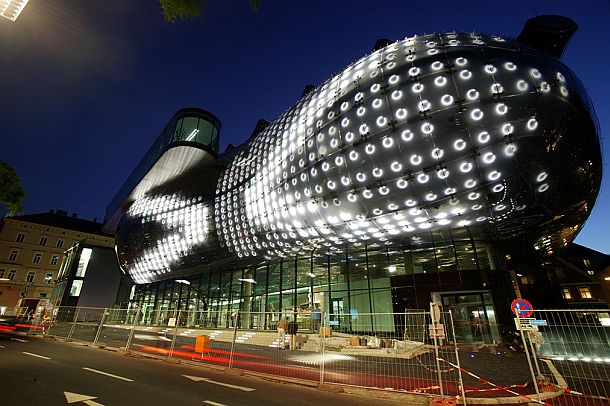 Since it is a friendly alien, let us get closer. It seems to float, not only because it reminds us of a cloud, but because the ground floor is surrounded by transparent glass so that the alien seems to land without any support. A curious structure, graphically called “needle“, forms a bridge linking the museum to an old building, Eisernes Haus (Iron Building), which houses the Camera Austria magazine and photography exhibits. It is a historical monument because it is listed as the oldest cast iron construction of the continent, dating from 1848. In that way, the old architecture is linked to the newest. 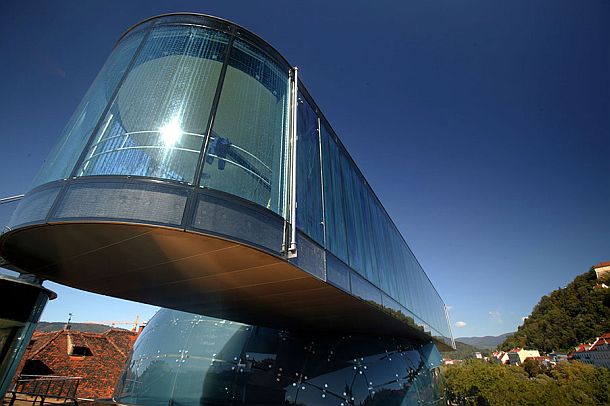 The “needle” is a 16m high viewpoint but there is another place from where you can enjoy the view over the city. It is from one of the 16 leaning nozzles on the top of the building. The remaining nozzles light up the building, during the day the sunrays arrive to those peculiar skylights and at night the circular fluorescents lamps are switched on. 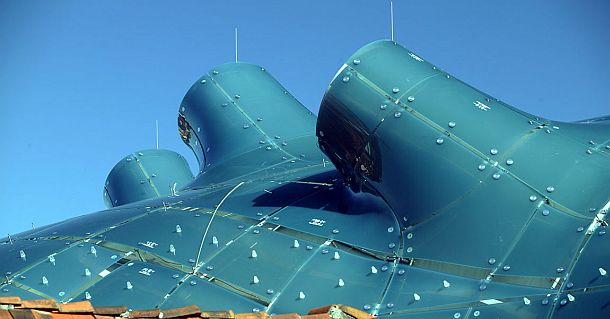 There are 16 leaning nozzles on the top

Finally, the coating does honor to the originality of architectural shapes, it is composed of 1,288 blue translucent panels of thermoplastic material. Virtually they are all placed outside while 200 of them are inside the building. 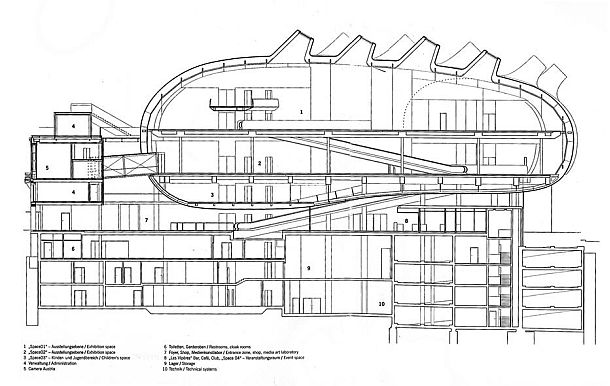 In all, there are 11,100m² of usable space, distributed over four floors and an underground parking, shared with a department store, for 146 vehicles. 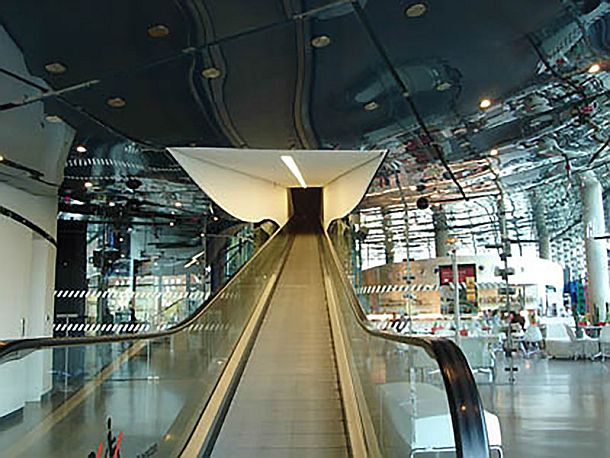 Two travelators transport the visitors through the museum

To get to the heart of this intriguing architectural design we must let oursevels be carried away. Since it is a museum, you might think that we allude metaphorically to be swayed by our senses to appreciate the artistic pieces of the exhibits. Yes, but we mean literally to get carried away by the travelator to access the rooms. The big biomorphic structure of the building rests on a 225 tons frame of steel beams. Between the support and the plexiglas coating, there are the electrical, fire detection and sprinkler systems. On the main façade, we also find in this intermediate space the BIX installation (“Bix Pixels”), which replaces a traditional video screen. It is a creation of the German company Realities United. The images are formed on a surface of 900 m² and are not obtained with digital pixels but using 930 points of light provided by fluorescent tubes of 40 cm in diameter and a power of 40W. 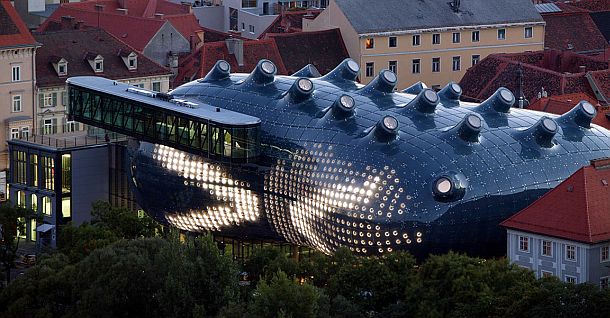 Images cannot be displayed in color or high resolution but the effect in black and white, even with low resolution and 18 frames per second, is enough to obtain the desired effect projecting artistic videos and messages. Images do not appear within a homogeneous framework, they adapt to an irregular surface and the edges are blurred, accentuating the feeling that are integrated into the building envelope and not projected on it. Note that in this project the BIX screen is not a mere decoration but part of the architecture and integrated in the museum project, since the Kunstahus has a specific programm for the BIX screen. More than 1,000 thermoplastic panels of 3 m x 2 m have been set on the BIX screen, open-jointed to improve ventilation and remove the residual heat. 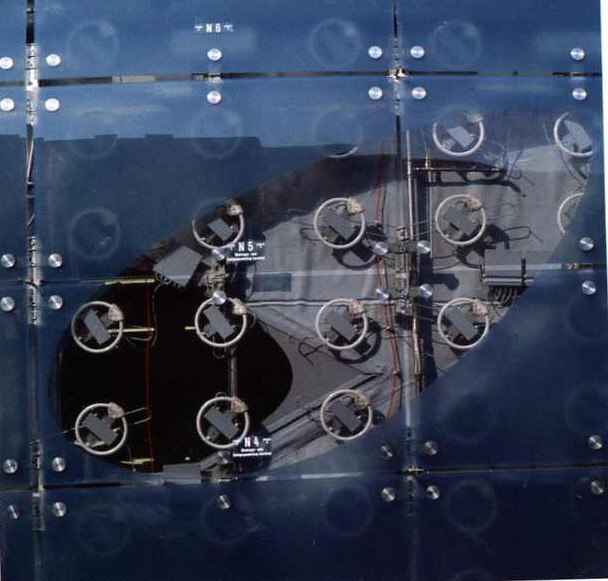 The use of Rhino software is essential in designs like the Kunsthaus Graz, with complex curves and atypical coatings, like this panels that must be adapted to the curved silhouette. VisualARQ would have been helpful in such a complex project when working at different levels. The Level Manager would have helped to visualize the inside of the building easily and edit the geometry of each level very quickly. However, the most important feature that VisualARQ would have provided to this project that has so many curved shapes, is the tool to create plans and sections in 2D. These 2D drawings, as they are created inside Rhino, could be printed afterwards as vector output or exported to .dwg file format for postproduction purposes. 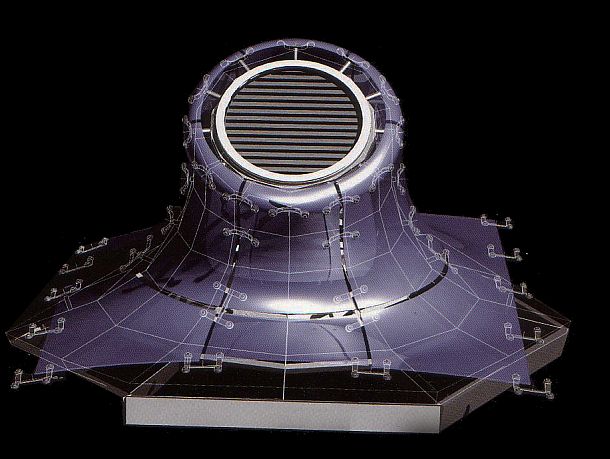 The impact of this curious architectural approach of the British Sir Peter Cook and Gavin Robotham can be measured in several ways. First, the design was finalist in the Mies Van Der Rohe and Stirling awards. Moreover, the objective of the city of Graz has been fully achieved and, thanks to the attraction exercised by the architecture of the museum, dozens of new businesses have opened in the neighbourhood. There is a third way to ascertain what the Kunsthaus Graz represents: the issuance of a stamp with its image.

Kunsthaus Graz has become an icon of the city.

There are no borders: a seal for the written correspondence which is progressively disappearing but with the image of a bold and contemporary building with art in its interior and projected on the outside. Architecture can clear limits and go beyond them. Cloud, caterpillar, alien or bubble, we won’t agree on the name. Only in that the new architecture is floating in the air of Graz and it’s blue. 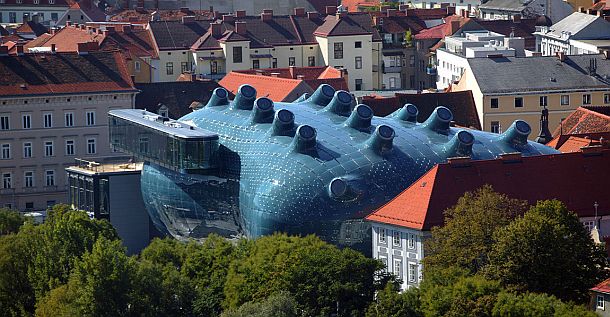 It doesn’t matter if it’s a caterpillar, cloud, bubble or alien. Only sure that it’s blue